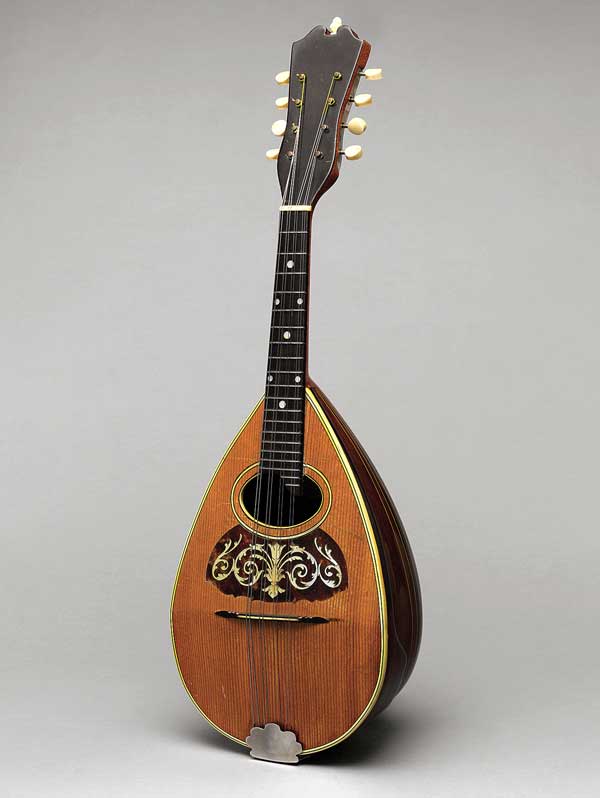 Our regular musical interlude this time includes a look at some innovative Italian American guitar makers and the legacy of early harpsichord music that continues to flourish in New England today.

If you had to name the most versatile musical instrument of the last hundred years, chances are it would be the guitar. There are few other modern instruments that have crossed the boundaries of classical, jazz, blues, flamenco, folk, country, world, and biggest of all, pop, with quite the panache of the guitar. The guitar has sent its vibes through all of these genres and if one country can show many of the best examples of each, it is the USA.

How the guitar arrived in America is a fascinating story, one that was told in an exhibition called ‘Guitar Heroes’ at the Metropolitan Museum of Art, New York.

While Spain may be the popular image in Europe as the home of the guitar, in America this is not the case, for in the USA it is the Italian connection that has dominated the guitar’s development. The movement of Italian immigrants west, to the land of opportunity, has been well documented, and among those immigrants came a number of talented Italian instrument makers, luthiers, who began to establish a flourishing community.

Over the years these Italian American craftsmen have produced a great variety of musical instruments, from traditional European-style violins, mandolins, and guitars, to newer American instruments such as archtop guitars and mandolins and electric guitars.

The show at the Met examined in particular the work of three remarkable craftsmen from this heritage—John D’Angelico, James D’Aquisto, and John Monteleone, each producing guitars with uniquely individual tonal colours. If you consider that the guitar has changed very little in shape and size since the late nineteenth-century ‘classical guitar’ development in Spain by Antonio Torres, here are three Italian guitar makers each of whom were both innovative and experimental in their designs, with John Monteleone continuing this trend through the 1980s to the present day.

Bearing in mind that Italy has the most illustrious history of stringed instrument making, there is plenty of visual evidence in the instruments of these Italian American craftsmen to show that this DNA has been passed down. The discerning musician-collector can, for example, recognise influences from the famous mandolin makers of Napoli, with hints of earlier stylish influences from such as Amati and Stradivari.

But what was the musical appeal and to what type of players did these instruments appeal and continue to appeal to? If we circle back to the thirties and forties, what do we hear but Django Rheinhardt playing riffs on his favourite guitar—a Mario Maccaferri—in the Quintette du Hot Club de France. Thus Django put down a marker if ever there was one for so many jazz guitarists who followed. Name a great jazz/dance band guitarist and the odds are that one of the favourites in their guitar collection will be by one of these great Italian American makers.

So hats off to the Met for bringing together this magnificent showcase of Italian and Italian American instruments, and continuing applause, too, for these makers themselves who continue a grand tradition in a modern style.

If we now head for Boston, MA, we encounter yet another but more recent community of instrument makers. If you’re wondering, why Boston, remember that this area is one of the most significant in the USA for its musical heritage. It was here in Boston, for example, that the earliest documented public concert in America took place, in December 1731. And later, in the nineteenth century, the premiers of both Händel’s Messiah and Haydn’s The Creation were given to enthusiastic audiences in the city of Boston.

Given this strong musical tradition, perhaps less of a surprise is that musical instrument making flourishes in the Boston area. At the forefront of the renaissance of early music in the sixties and seventies was harpsichord maker Frank Hubbard (1920-76) whose many years of research appeared as Three Centuries of Harpsichord Making in 1965, a seminal book at that time with its strong emphasis on authenticity.

Hubbard Harpsichords continues to flourish as a business, supplying custom-made instruments as well as harpsichord kits. For the latter, Frank Hubbard had the following encouraging words: ‘Let me say this about our kits: if the kit is carefully assembled, well voiced and handsomely finished, the result equals the product of any professional maker and resembles its prototype very closely…’

One of Frank Hubbard’s past apprentices is Steven Sørli, also Boston-based, who began to work with Frank Hubbard in 1971 and has gone on to achieve distinction as a builder of harpsichords. For the last ten years, Sørli has been researching and designing a long neglected keyboard instrument, the ‘lute harpsichord’ or ‘lautenwerk’. This unique instrument was originally fitted with gut strings, sounding very much like a lute or archlute—check out the sound for yourself here.

For woodwind players, the name of Von Huene is one of the most illustrious of today’s makers. Established in New England in 1960 by Friedrich and Ingeborg von Huene, The von Huene Workshop Inc (www.vonhuene.com), specialises in historical woodwinds. These instruments are exquisite, being finely tuned and expertly voiced; a selection was seen during an exhibition taking place at the event mentioned below.

If you happened to be in New England, June 2013, you would have been able to attend the Boston Early Music Festival, featuring several performances of Agostino Steffani’s Niobe, Regina di Tebe (Niobe, Queen of Thebes)—an operatic masterpiece first performed as the opening spectacle at the 1688 Carnival in Munich—directed by Stephen Stubbs and the lutenist Paul O’Dette.
(www.bemf.org)