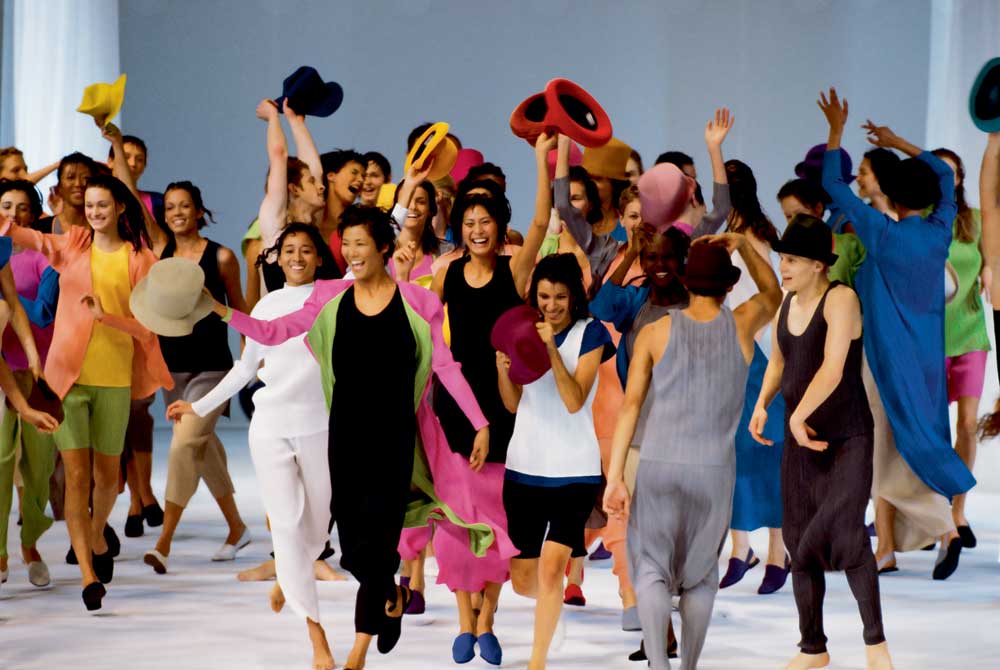 Creation and technology are what Issey Miyake’s philosophy is based on. From the beginning of his career through to his latest creations, he stresses both the importance of imagination and the development of new technology in which to make clothing—with stunning results. His concept of ‘a piece of cloth’ still holds true today.

Issey Miyake grew up in war-torn Hiroshima in the 1940s. He studied graphic design at the Tama Art University in Tokyo, graduating in 1964.

In 1965, he enrolled as a student at the Ecole de la Chambre Syndicale de la Couture Parisienne. He worked first with Guy Laroche and then in 1968 with Givenchy, followed by a six-month stint at Geoffrey Beene in New York. He returned to Japan in the winter of 1969 just as the country was entering a new transition and was beginning to establish itself as a major manufacturing force.

The Osaka Expo was held during this transitional period for Japan and had a big impact on Issey and his desire to work and establish himself in Japan. He was fast attracting commissions from important corporations. Issey Miyake said: ‘The Expo was a time of social energy and national pride. 1970 was a special year and I realised I had to start something new’. So he established the Miyake Design Studio in April 1970 in Tokyo, with the help of friends and collaborators alike.

From then on, his career took off in a big way. He first showed a Women’s collection in New York in 1971. Since 1973, the Issey Miyake Spring/Summer and Autumn/Winter shows are held in Paris during Fashion Week twice a year. In his designs he challenges the conventional idea of garment making, highlighting the relationship between body and cloth. Today he is an internationally renowned designer.

In the late 80s, he began to experiment with new methods of pleating that would allow both beauty and flexibility of movement for the wearer as well as ease of care and production. This eventually resulted in a new technique called garment pleating and in 1993 the Pleats Please line was launched and then shown on the catwalk during the Spring/Summer 1994 Paris Collection.

After turning over the design of both men’s and women’s collections to his designers, Issey Miyake worked on the realisation of 21_21 Design Sight that opened in 2007 in Tokyo. In 2010, Issey Miyake presented a new and innovative line called ‘132 5. Issey Miyake’. Issey has also ventured into other areas. His watches are now in their 11th year. They are all designed by world renowned guest designers such as Tokujin Yoshioka, Naoto Fukasawa, Ross Lovegrove and Harri Koskinen to name a few.

With every turn Issey Miyake takes in the world of fashion, he values free thinking that is unconventional, thinking that takes into consideration the spirit of creation, curiosity and love as universal expression. The collection is made to wear and yet it happens that people are so overwhelmed by the simplicity and beauty, they sometimes hang them in their homes as a piece of art.

Issey Miyake’s Pleats Please collections were launched almost 20 years ago. Made from single pieces of high quality 100% polyester fabric, Pleats Please clothing is innovative in its process: the clothes are first cut and sewn together from fabric that is nearly three times larger than the finished item of clothing, then sandwiched between sheets of paper and hand-fed into a pleats machine. From tube dresses to cardigans, skirts, shirts, or elastic-waisted pants, the clothes emerge with permanent pleats.

This industrial process allows both texture and form to be created at the same time. Vertical pleating is used to create different effects and architectural shapes. Pleats Please clothes are surprisingly functional and practical; they store easily, travel well, require no ironing, can be machine-washed, and dry within hours. Shapes are simple, and the colours and prints diverse (a set of basic colours is available each season, plus seasonal colours and prints).

The clothes’ simple beauty, comfort, lightness, and ease of care have changed the way many women all over the world dress. Issey Miyake’s versatile collection is equally ideal for day or evening and especially favoured for travelling as the pieces are very light and roll up taking minimal space in suitcases.

For the first time, the story of this revolutionary line of clothing is being told in book form, published by TASCHEN. The concept of Pleats Please Issey Miyake is explored through a vast array of texts and images, tracing its journey from inception, through material development, to its public reception. The explanation of its evolution also includes, also for the first time, a section not only revealing the creation of the original thread—but also the pleating process.

The book is being launched in London and Paris on September 6, 2012.

Find out about Marie Antoinette’s shoes and artioli.