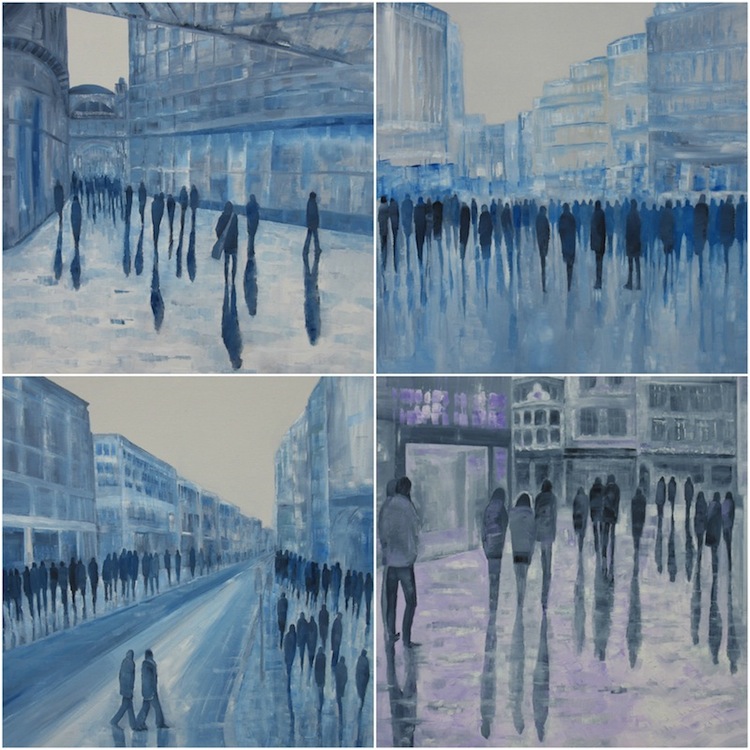 For the second instalment in our Arts & Collections series, we visit Jo Holdsworth, a London-based artist at her home studio in Wimbledon in south west London. Jo talks animatedly about her influences and inspirations, including Frida Kahlo and her Lowry roots, over a coffee or two with the spring light streaming through the open windows.

Jo Holdsworth is a London artist who is beginning to make a name for herself in the art world.  Already this year she has been invited to exhibit in a number of London shows, has had her work included in an auction of contemporary art and now has a solo show coming up in Wimbledon later this month.

Her work evokes, with uncanny semblance, the comings and goings of everyday life. With seemingly effortless brush strokes and a limited colour palette, she crafts an artistic window into quintessentially British scenes.

The figures in her work, elongated and striking, dominate her oil on canvas paintings as recurrent leitmotifs. Faceless and eerie, they are denied identity. But this anonymity means each one of them could be any one of us, adding to the undeniably potent imagery of Jo’s work.

Jo’s figures appear in her paintings of London, which induce an active world—bursting with hustle and bustle. Whereas her bold landscapes, both rustic and urban, convey idyllically quaint countryside, jagged and sweeping coastline and imposing inner-city vistas.

Overall, the artist’s work offers a vibrant pastiche of modern Britain in a highly accessible form.

In this Arts & Collections exclusive, Jo provides unfettered insight into her work and explains her working processes.

A&C: There are echoes of Lowry in your work. Has this been said before and is it deliberate?

JH: The comparison with Lowry has been said quite a lot actually and it is so interesting for me because I grew up in Manchester and in fact Lowry was a friend of a great family friend Pat Cooke, a Manchester artist and illustrator who is regarded by some as Lowry’s protégé. Pat used to talk about him a bit, though not in any detail because Lowry was a very private person, and I am sure growing up with Lowry’s images of Manchester and indeed Pat’s own figure paintings have influenced my work.I can certainly see why people mention Lowry when they look at my crowd scenes. My figures are faceless and rather strange, and I do paint many people as seen from behind. The figures are deliberately half-real too and the paintings are intended to show modern urban scenes—walking to factories has been replaced by commutes via railway stations and shopping streets. I also try not to be too specific in the details of the cityscape in the background; it is more the more the mood of a street or particular area of a city that interests me, whether it is fashionistas in Carnaby Street or workers commuting to and from the City.To be honest I love the comparison with Lowry—I love Lowry’s paintings and feel honoured that I could be talked of even in the same sentence as one of the world’s great painters and particularly one that is connected with my roots.

A&C: We are interested in your colour palette. Do you use a limited palette in your work for a particular reason?

JH: I think a lot of artists have particular colours that they like to work with, and I am no exception. My new series of figures in an urban landscape are more monochrome as the colours, or rather the lack of them, are intended to capture the mood of a city where people move about in the half light of early morning or at the end of a day. I have always been interested in transitional places, and have always painted a lot of scenes of railway stations and the streets of London. People are always on the move, heading somewhere or on their way home, and it is these transitional spaces and transitional lives that fascinate me. The muted colours are also intended to reflect the strangeness of a half-real world where people are on the move either alone or in crowds going about their daily business.

A&C: Which contemporary figures, in particular, inspire you most?

JH: I think there are so many inspirational contemporary figures so I am going to focus on a contemporary inspirational painter. Frida Kahlo is certainly an inspirational painter for me because of the beauty and truth in her paintings and the fact that she overcame real suffering and pain, all of which are reflected in her work. I was lucky enough to visit her house near Mexico City some time ago and it was a very powerful and moving experience. There is a major Frida Kahlo exhibition coming up at the V&A this June and I can’t wait to visit.

A&C: What can you tell us about your upcoming exhibition?

JH: My upcoming exhibition is called “People & Places” and is a solo show of paintings of mine of Wimbledon, London and further afield. It includes both modern landscapes and contemporary figure paintings.

A&C: How do you feel about doing a solo exhibition?

JH: It is exciting to be able to show a group of many of my own paintings together, but it is also quite daunting, as you know people are coming along just to see your work and you hope that they will like the show.

A&C: Why have you chosen the subject matter of contemporary figures and landscapes?

JH: I have always been drawn towards painting both landscapes and figures. I love exploring landscapes and painting in different locations with different views, yet equally l love observing and painting crowd scenes and the relationship between figures in crowds. This show allows me to present both sides of what I do. New for this show too are more paintings that explore crowds within a more defined urban landscape, and I have deliberately included quite a few paintings from this new series as they explore both people and places and the relationship between the two.

A&C: Which landscapes, in particular, inspire you most?

JH: Like many artists, I can be struck by the beauty of wild, natural scenes and be desperate to get my paintbrushes out. However, I also love London. So urban landscape views of the capital are very close to my heart. We are lucky enough in London to have some stunning parks too. Often the landscapes that inspire me the most depend not only on the view but also on my mood, the particular moment in time and even the weather.

A&C: For you, what is the most important thing for people to take away from your work?

JH: I want people to have a real feeling of time and place and be transported to a particular moment in time. The painting needs to create an immediate uplifting feeling of being somewhere else, whether it is within a crowd or observing a view. I also want to create something where it is clear what it is; yet it also has a certain element of ambiguity, so people can interpret the painting in their own way.

A&C: How long does it typically take you to complete a work?

JH: Some paintings take weeks; some are much quicker. It depends on how well the painting is going and whether what I want to achieve falls into place quickly or not. As with many artists, the hardest part is sometimes knowing when to stop so that the painting does not become too crowded with detail or overworked.

A&C: What and who inspires you most?

JH: In terms of my work, particular scenes or views can suddenly inspire me. I take a lot of photographs to reference in my work. Depending on what I am working on I can get particularly engrossed in and inspired by particular elements of nature, maybe how the waves fall on a beach or how the clouds look above a scene. Light always plays a huge part in anything I am working on, as it does for many artists.

A&C: What do you think of the growing role that social media plays in the art world?

JH: Personally I like it and have embraced it. I feel it is a huge privilege to be able to connect directly with people that are interested in art and the arts, and to learn what others are doing in a very personal and direct way. Some social media platforms are particularly good for art, such as Instagram, which is very visual. I have also found people on it to be incredibly genuine and supportive, and have made some great supportive friends, particularly other artists and creatives, whom I may not have come across were it not for social media.

A&C: How do you try to harness social media to sell your work?

JH: I mainly use social media to raise the profile of my shows and what I am working on, particularly if there is a charitable element to what I am doing. In a way I use social media for letting people know what I am doing rather than selling directly from it. It has led to approaches to take part in shows and exhibit at galleries, as well as commissions, so it has provided fantastic selling opportunities.

A&C: You mention there is sometimes a charitable element to what you are doing?

JH: Yes, sometimes I use my shows as a way of raising the profile of particular charities that are important to me. This show “People & Places” is being held in support of Wimbledon Guild, a local charity that provides help, advice and support to the people of Merton. I am giving a percentage of my sales to Wimbledon Guild and I am holding a charity preview event to support them.

A&C: What sort of moments are you trying to capture in your work?

JH: In all of my work I am trying to capture lost moments of time and relationships between people and places. This is particularly apparent in the segmented paintings where each of the segments reflects different moments in time and space.

A&C: What sorts of people collect your work?

JH: I like to think that my work appeals to lots of different people, from those just starting out buying art to people who have already amassed more of a collection and would like a new piece that enhances what they already have in their home.

A&C: What can you tell us about your commission process?

JH: The commission process varies considerably. Sometimes clients have seen something I have produced already but want it to be different in some way, maybe larger in a different format or in different colours, though clearly no two pieces can be the same. Sometimes it is less prescriptive and clients come with a concept and we work through some ideas and designs before settling on the final theme and approach. I always tell clients that there is no obligation to buy the final piece; they need to make sure that they are happy with it first.

A&C: And how about your collaborations?

JH: I have worked on collaborative projects with other artists and with writers. Again there is no set approach, but a respect for what the other person does and a clear aim from the joint project is key. Commissions themselves also often turn out to be quite collaborative too if you are, for example, trying to create a mood in someone’s home or business from the interaction between the painting that is being commissioned and the setting in which the artwork is being placed.