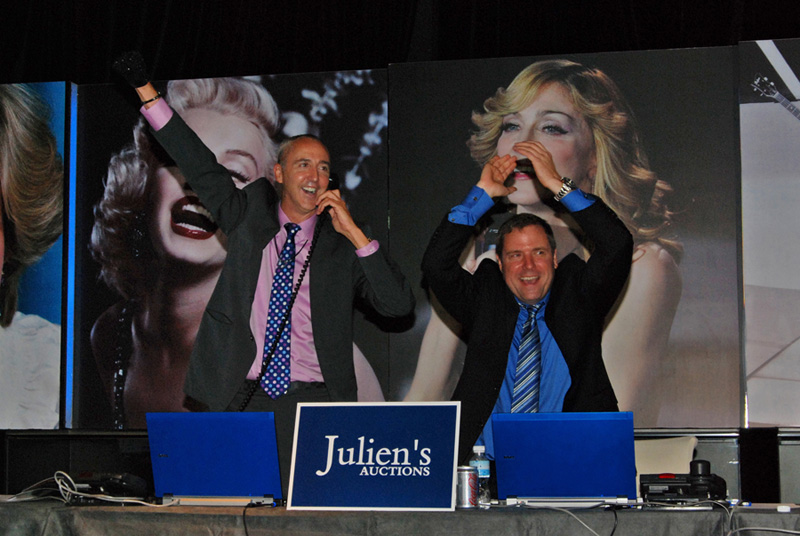 A third generation entrepreneur, Darren Julien has built his entire career around the auction industry. He cut his teeth at Sotheby’s and went on to establish Julien’s Auctions—today a globally recognised brand. In an Arts & Collections exclusive, he talks predictions, new technology and how to avoid potential provenance pitfalls.

It’s no secret that, in recent years, auction houses have expanded into new markets abroad. Russian oligarchs and wealthy Asians now enjoy unfettered access to collectibles hitherto unavailable to them. The growing marketplace of celebrity and entertainment memorabilia is no exception.

‘We do a lot of marketing to Russia and to Asia. And that’s really increased our business because there are new buyers coming out of those countries. And western pop culture, especially, is highly sought-after,’ Julien reveals. ‘It used to be very difficult for them. They didn’t even know you could buy these things,’ he explains.

The widespread availability of new technologies has served to bolster these emerging markets. ‘Now, with the age of the internet and technology, you can bid from all over the world. Our business has really boomed. Even though our auctions are mostly held in the states, most of the items go to people around the world and other countries,’ Julien adds.

‘Certain celebrities are popular in different countries,’ he continues. ‘You’ll sometimes see certain celebrities sell well in France; certain bidders come out of Germany. Usually Asia and Russia like western pop culture. When we did Cher’s auction, most of the bidders came out of the United States and the U.K. But each celebrity is different. You can’t really tell, sometimes, until you make the announcement. You see where the catalogue orders come from, where the bidder registration has come from.

So, how does Julien’s Auctions use new technology to extend its global reach?

Julien reveals: ‘We have live streams where you can actually see and hear the auctioneer on “Julien’s Live”. And you can also see the currency. So even if you’re in mainland China or Russia—and you don’t know English—you can at least follow along and see the currencies.’

The instantaneous nature of online bidding has opened up new business channels for the auction house. ‘People used to have to travel to these auctions to participate. But now, they save their money and invest it into the actual auction—as opposed to a plane ticket or a hotel. And it’s more convenient. High net worth individuals will take the time to watch an auction when they’re at work, or on their mobile phone while they’re travelling,’ Julien adds.

Does this mean less people are attending auctions? Julien confesses: ‘Our auctions, typically, are very well attended. But you see a decrease. Whereas we used to have maybe two or three hundred people in the room, now it may be 50 to a hundred. And that’s because people would rather stay at home, or bid from their office, as opposed to taking a couple of days off to travel to the event.’

And does this decline in attendance mean the auction room magic is lost? ‘Not in our auctions,’ Julien maintains. ‘I do think in some auctions it is. But our auctions are fan-based. So you get those who come who might not be able to afford something. But they can come and experience the auction. So we typically do still get that: where the auction rooms are exciting. But most of the bidders are high-profile bidders who are on the phones or online now. So you don’t have [a situation] where most of the bidding happens in the room, those are usually the spectators.’

In Julien’s words: ‘Provenance means everything.’ He is, of course, right. But what is the best way to guarantee a given item’s provenance?

‘It’s important to buy from a reputable company; it’s always important to ask for a condition report,’ he explains. ‘That’s why our business, in particular, exploded.’ The auctioneer adds: ‘It’s important in what we do that we don’t sell anything unless we are 100 percent sure it is authentic. You can’t sell an item that’s based on hearsay or stories without being able to verify first-hand the story is true. We probably reject 80 to 90 percent of the property offered to us, because it doesn’t have solid enough provenance.

‘And it’s really important you can trace the history of the item. Sometimes it’s a matter of matching it up with what was worn on stage, or seeing certain scratches. When we sold John Lennon’s guitar, for $2.4 million, the only way we knew that was John Lennon’s was [because] we were able to match up the grain marks with those in videos of him, as well as the scratch marks. And they matched up perfectly. The grain on a guitar is like a fingerprint; no two guitars are the same. So, sometimes, that is really important; that can authenticate an item.’

However, this method of authentication can’t always be relied upon—especially, Julien elucidates, when it comes to everyday items, such as the black leather jacket worn by Patrick Swayze in Dirty Dancing (1987). ‘We sold it for $60,000,’ he discloses. ‘But the reason we sold it for that much was [because] it came from the estate of Patrick Swayze. That’s a good example to show provenance means everything. The buyer will then be able to sell it in years to come, because it came from Patrick Swayze’s estate.’

Julien describes how important the ‘seal of approval’ is when it comes to establishing an item’s provenance. ‘That’s why when we do single celebrity sales they are the best auctions, because you know the items come from the celebrity and they are what we say they are.’ He adds: ‘On any level you start at, provenance is key.’

The affinity between art and memorabilia

So, is there a connection between investing in art and investing in memorabilia? ‘Absolutely,’ Julien says. ‘Number one: it’s a way to diversify a portfolio. And it’s a lot sexier to have a guitar hanging on your wall that John Lennon played than it is to have a Monet [painting].’ He describes items like guitars and pop culture-related objects as ‘conversation pieces’ and ‘something to brag about’. ‘People are in awe of them,’ he says. ‘You go to a museum and see a painting, and it’s great if you’re an art connoisseur and you enjoy art, but there is the “wow factor” with memorabilia.’

Predictions for the future

But what about future ‘blue chip investments’? ‘Lady Gaga is probably one of the best investments because she is someone who is always going to reinvent herself. She is a true artist. So she is a future blue chip,’ Julien believes. ‘Same thing with Madonna; she has always reinvented.

Read also: Painting Women Back in the Picture