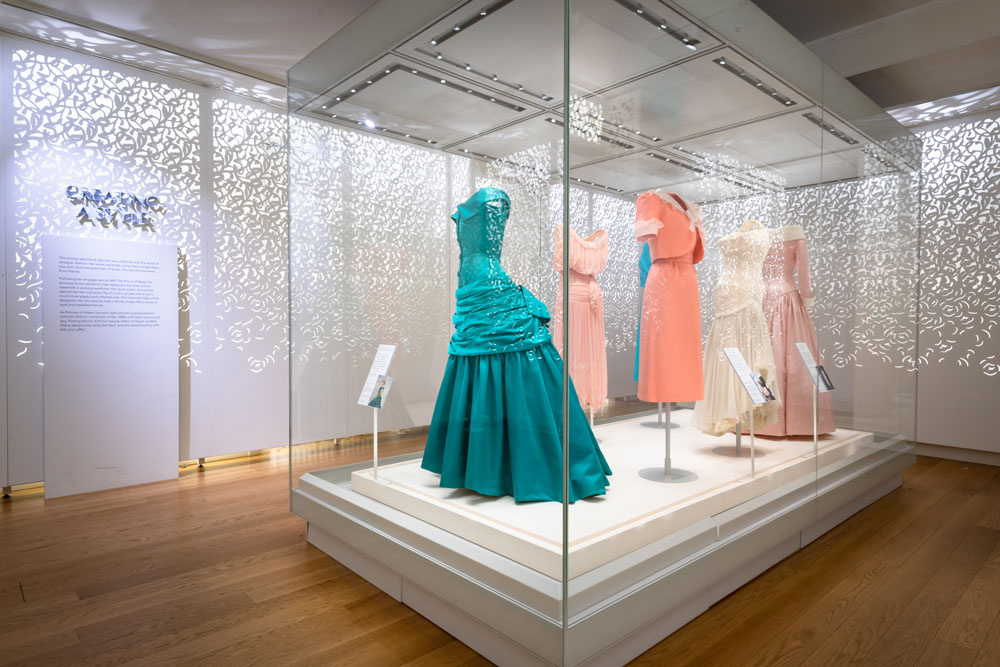 A historic display tracing the evolution of Princess Diana’s fashion and style is currently on show at Kensington Palace, the late royal’s former home.

Diana: Her Fashion Story is a landmark exhibition that brings together pieces worn by the Princess of Wales during her most iconic moments. Some are even on loan from TRH The Duke of Cambridge and the Duke of Sussex.

The collection consists of 28 garments—from glittering evening gowns to Princess Diana’s working wardrobe from the 90s—and includes the pink Belleville Sassoon suit she wore to board the train for her honeymoon and the Victor Edelstein gown she donned to pose for an official portrait by Terence Donovan.

In April, additional garments were added to the display at Kensington Palace. Arguably the most poignant is the Halo Trust branded protective vest worn by Princess Diana on her visit to the landmine fields in Angola in 1997, which she wore with a simple denim shirt and Armani chinos for the high-profile visit.

Curator at Historic Royal Palaces, Eleri Lynn, says the sell-out exhibition focuses on ‘exploring the evolution of a young woman who had to first learn the rules of royal and diplomatic dressing, then master the art of creating her own signature style.’

Princess Diana greatly influenced British and global fashion. While the unique public role she held impacted her fashion choices, she never failed to forge her own style. She used the language of clothing to connect with and inspire people, but also to focus media attention on causes that she cared deeply about.

The exhibition will also explore how the Princess considered the specific requirements of each public engagement when working with designers to create her iconic looks.

Items on show will include pieces designed by David and Elizabeth Emanuel—who also created the Princess of Wales’ wedding dress—Catherine Walker and Gianni Versace.

Diana: Her Fashion Story will be on show at Kensington Palace throughout 2018.