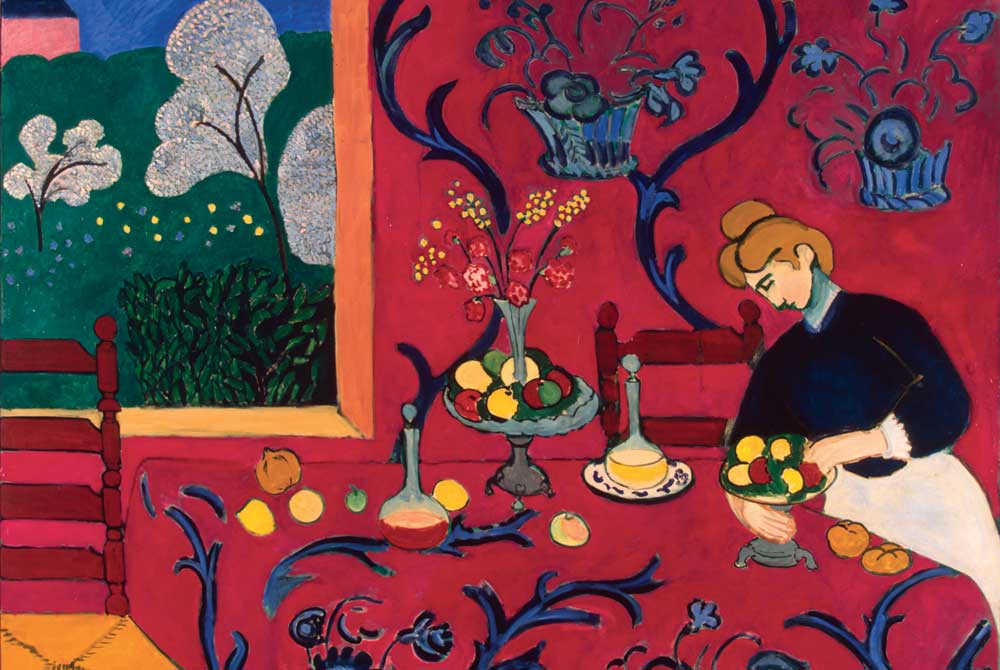 In the first decade of the twentieth century, artists such as Matisse and Picasso were leading the development of art into an entirely new phase. The Hermitage Museum in Amsterdam showcases Matisse to Malevich: Pioneers of Modern Art, an exhibition that explores this ground-breaking new path these artists were beating, in their drive to represent life itself.

The State Hermitage Museum in St Petersburg has one of the world’s most important collections of modern art. Yet visitors to St Petersburg over the next few months could be forgiven for feeling slightly short-changed since many of the stars of the Hermitage’s modern collection have been temporarily transplanted to the Hermitage Museum’s Amsterdam branch, where they are on show until September in the exhibition Matisse to Malevich: Pioneers of Modern Art. Visitors to Amsterdam, on the other hand, are in for a treat: here are 75 key works from the Russian state collection, which present a remarkably coherent view of the origins of modern art.

By the first decade of the twentieth century, when many of these works were painted, photography had already rendered traditional representational painting redundant in the eyes of many artists. Matisse, Picasso and their contemporaries working in France, were struggling to find new ways to represent the world.

This exhibition documents how, from about 1905 onwards, Matisse and the so-called ‘Fauve’ artists began to explore the use of colour as form, while just a few years later, Picasso and the Cubists experimented with geometry, breaking down objects into their component parts in order to examine every facet of what they were depicting.

Most of the works in the exhibition were brought to Russia by just two collectors, Ivan Morozov (1871-1921) and Sergej Shchukin (1854-1936), who were remarkable for their shared desire to stimulate the Russian art world by introducing the work of ground-breaking artists such as Matisse, Picasso, Derain, Vlaminck and Van Dongen to the Moscow public.

The bright, unmodulated colours and flat planes of the new art were challenging even to a Parisian art scene which had lived through the innovations of the Impressionists and Post-Impressionists at the end of the nineteenth century. In Moscow, notoriously slow to accept artistic change, they were profoundly shocking. Nonetheless, the two collectors were determined to introduce a spirit of adventure into contemporary Russian art, and in doing so, they assembled a group of works which encapsulated all that was modern in French art of the early twentieth century.

The undoubted star of the current show is Matisse’s The Red Room (Harmony in Red),1908), which confronts you as you walk in to the main hall at Hermitage Museum in Amsterdam. Commissioned by Shchukin to hang in his dining hall, it was originally intended as a Harmony in Blue, and initially Matisse painted it as such.

After two months, however, Matisse decided that the dominant colour in the painting should be red, and without recourse to his patron, he painted over the blue Toile de Jouy which had formed the basis for the painting with a strong, flat red, in order to create what he saw as the perfect balance of colours. Luckily, Shchukin saw the importance of the new version—which featured larger quantities of red paint than had ever been seen in a European painting before—and supported Matisse in his attempts to create a new visual language, commissioning further works including Dance and Music (the latter briefly on display in this exhibition) which had in common the use of flat planes of pure, joyous colour. ‘I have full confidence in you’, he wrote to Matisse, acknowledging receipt of the two panels. ‘The public is against you, but the future is yours.’

Matisse’s fellow Fauves, including Maurice de Vlaminck and Kees van Dongen, both well represented here, shared his preoccupation with colour, Vlaminck at one point writing of his bold, expressive approach to painting: ‘Straight from the tube, dammit! In order to paint, we need buckets of colour.’

For Picasso (another favourite of Shchukin’s), however, colour was just one tool in the artist’s armoury. Having passed through his so-called Blue period, represented here by The Absinthe Drinker (1901), and later through the brief Rose period, from 1904-1905 (Boy with a Dog, 1905; Nude Boy, 1906), when his pictures took on tones of pink and grey, he began to concentrate on deconstructing the items he painted. Basing his work on Cézanne’s notion of the cylinder, the sphere and the cone as the basis for all art, by around 1907 he began to produce the geometric works which marked the start of Cubism, approaching still life and portrait subjects alike from multiple points of view, depicting not just one, but many facets of the same object in each picture.

This deconstruction of form, shown here in works such as Woman with a Fan (1907–1908) and Table in a Café (Bottle of Pernod) (1912), was to prove central to the development of modernism. Shchukin was an early advocate of Picasso, collecting his work from as early as 1911 and amassing a group of 51 works in total, of which 14 are included in this exhibition.

The Russian-born artist Wassily Kandinsky, who met Matisse and Picasso in Paris in the early years of the twentieth century, took art in yet another direction, based on the links he found between colour and music. By 1913 he had arrived at a form of complete abstraction, and his monumental series of Compositions (represented here by Composition VI), focused solely on colour and sensation.

On seeing one of his paintings upside down, he thought it ‘indescribably beautiful…it represented no recognisable objects. It was exclusively composed of luminous patches of colour.’ Art had ceased to concern itself with the representation of everyday objects, or even the monumental or historical, but had become an end in itself. This is a point compellingly, if rather less joyously, made by the final work in the exhibition, Kasimir Malevich’s Black Square, (originally painted in 1915, though this version dates from c.1932), which takes the idea of abstract art to its logical conclusion, presenting the viewer with nothing more than a black square on a white ground.

As an introduction to the key themes of Western art at the start of the twentieth century, this compact, manageable show, filled with some of the greatest and best-known works of Matisse, Picasso, van Dongen, Kandinsky and Malevich, is hard to beat. St Petersburg’s loss (thankfully temporary) is Amsterdam’s gain.