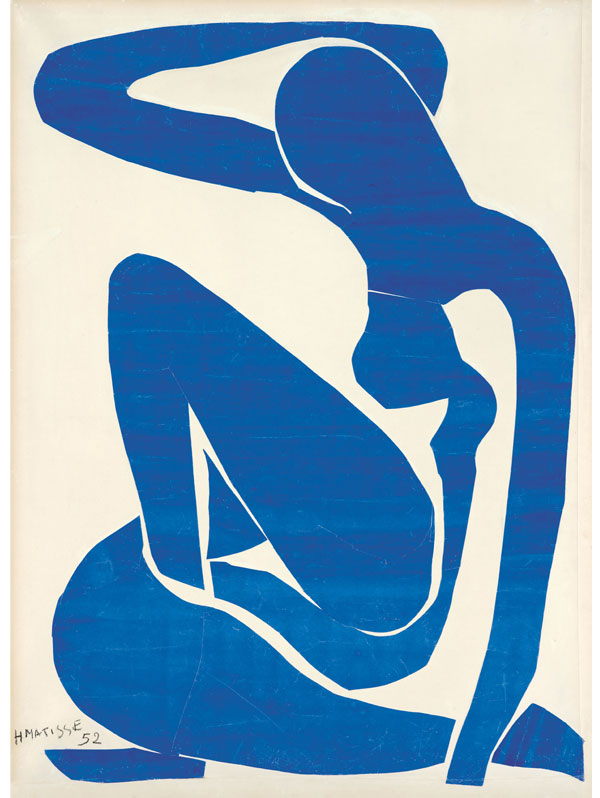 ‘All things considered, there is only Matisse’
– Pablo Picasso

The deceptively simply concept that caused a revolutionary development in art, by engaging simplicity with creative sophistication, that is recognized as a great artist’s final creative triumph.

No to be missed, one of the great art events of the year is the exhibition of Cut-Outs by Henri Matisse (1869‑1954) at Tate Britain, London. The exhibition has been four years in the planning, and this final stage of the Matisse’s career has never before been examined in such detail, owing partly not only to the dispersion of the works into international collections, but also due to the delicate nature of the cut-outs themselves.

After an outstanding career as a painter, sculptor, and lithographer, in later life Matisse was beset by illness which meant he could no longer stand for long enough to paint. Despite this, his creative urge caused him to develop a technique of drawing shapes on painted paper, which he then cut out with a large pair of scissors. Matisse began by making small cut-outs for his book project, Jazz (1943-47), which later developed into more ambitious, large-scale cut-outs. Cutting into pre-painted paper, Matisse began to make concepts for a number of commissions (such as the stained-glass in the Chapelle du Rosaire de Vence, also known as the Matisse Chapel in Vence on the French Riviera), ceramics and textiles. These shapes he called gouaches découpes (gouache cut-outs) and the technique came to represent a revolution in avant garde art.

At the time, many critics dismissed Matisse’s cut-outs as the folly of an old man past his prime. Today, Matisse’s cut-outs are recognized as the culmination of a great artist’s lifetime understanding of dynamic form, working together with vibrant colour—a technique Matisse referred to as ‘drawing into colour’, and one that became
his final artistic triumph.

From snowflowers to dancers, circus scenes and a famous snail, the exhibition showcases a dazzling array of 120 works made between 1936 and 1954. Bold, exuberant and often large in scale, the cut-outs have an engaging simplicity coupled with incredible creative sophistication.

The exhibition marks a historic moment, when treasures from around the world can be seen together. Tate’s The Snail (1953) is shown alongside its sister work Memory of Oceania (1953) and Large Composition with Masks (1953) at 10 metres long. A photograph of Matisse’s studio reveals that these works were initially conceived as a unified whole, and this exhibition is the first time they will have been brought together since they were made. Matisse’s famous series of Blue Nudes represent the artist’s renewed interest in the figure.

The exhibition’s curator, Nicholas Cullinan, comments: ‘These are extraordinarily forward-looking works. They are more like installations or environments than paintings; and they seem very contemporary now. They were a way of collapsing line and colour; at the same time they were a kind of sculpture—carving into pure colour.’

Tate Britain, London, is first to host the show (April 17 – September 7) before the exhibition travels to New York’s Museum of Modern Art, after which the works return to galleries and private owners around the world.