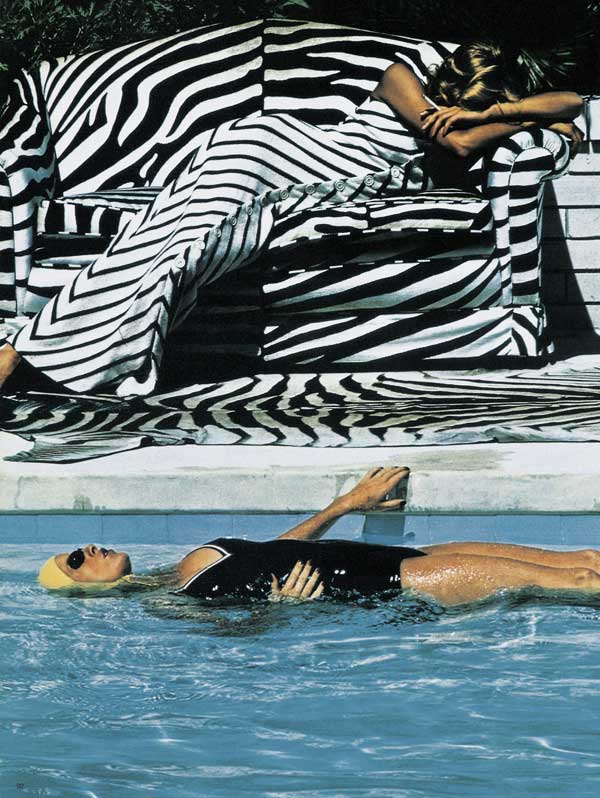 When a great photographer is at work, you imagine that every frame will be a work of art. For some, that might even be true, but for Helmut Newton (1920-2004), who captured some of the most memorable images ever published in the glossy fashion magazine, this was not true. It was Newton’s view that ‘the first 10,000 shots are the worst’. He also hated any ‘fine art’ references to his own photography: ‘Some people’s photography is an art. Not mine. Art is a dirty word in photography. All this fine art crap is killing it already.’

But despite what Newton said, connoisseurs and collectors of fine photographs would disagree. When any original Helmut Newton photographs come up for sales these days, there is always hot competition from collectors and museums to acquire them. To take one example, the famous duo of images, Sie Kommen, Paris (Naked and Dressed), Vogue Studios, 1981, a 4-panel gelatin silver print, sold above the high estimate at Christie’s in 2008 at $662,500.

For the glossies such as Vogue, Elle, Queen, Stern, and others, Newton was the photographer of the 1960s and 70s in particular, and into the 80s. In a memoir he wrote not only about how he liked to work, but also about his long association with Vogue: ‘I had found out that I did not function well in the studio, that my imagination needed the reality of the outdoors. I also realized that only as a fashion photographer could I create my kind of universe and take up my camera in the chic place and in what the locals called la zone, which were working-class districts, construction sites, and so on. To work for French Vogue at that time was wonderful: Who else would have published these nudes or the crazy and sexually charged fashion photographs which I would submit to the editor in chief?’

The current exhibition featuring two world-class photographers, ‘Helmut Newton: Pages from the Glossies | Greg Gorman: Color Works’ (December 4, 2015 – May 22, 2016) at the Helmut Newton Foundation, Berlin, offers us a new perspective on many of Helmut Newton’s iconic photographs. Spanning more than four decades, the images are presented as facsimiles of the original magazine pages in which they were first published, between 1956 and 1998.

In 1998, Newton compiled a selection of these high-gloss magazine images in his book, Pages from the Glossies, published by Scalo in Zurich. Long out of print, the book will be reissued this fall by publishers Taschen, while the Helmut Newton Foundation presents the first exhibition of the single- and double-page images featured in this book, exhibited as enlarged facsimiles. They include the original headlines, page numbers, commentary, and captions from the magazines they originally appeared in. This presentation remains true to its source, showcasing more than 230 magazine pages and nearly 500 individual pictures.

At the Helmut Newton Foundation where this exhibition is taking place, American photographer Greg Gorman’s work is also on display. Gorman returns as a guest of the Helmut Newton Foundation following his first exhibition there in 2013. His black-and-white male nudes in ‘June’s Room’ complemented Helmut Newton’s ‘Big Nudes’ in the main exhibition space at the time. For this exhibition, June’s Room will now feature 25 color portraits made by Gorman of prominent musicians, visual artists, and actors, mostly hailing from the United States, including Grace Jones, Andy Warhol, Julianne Moore and David Bowie.

DENNIS HOPPER: EYE OF THE STORM

Sting and Trudie Styler’s Collection up for Sale