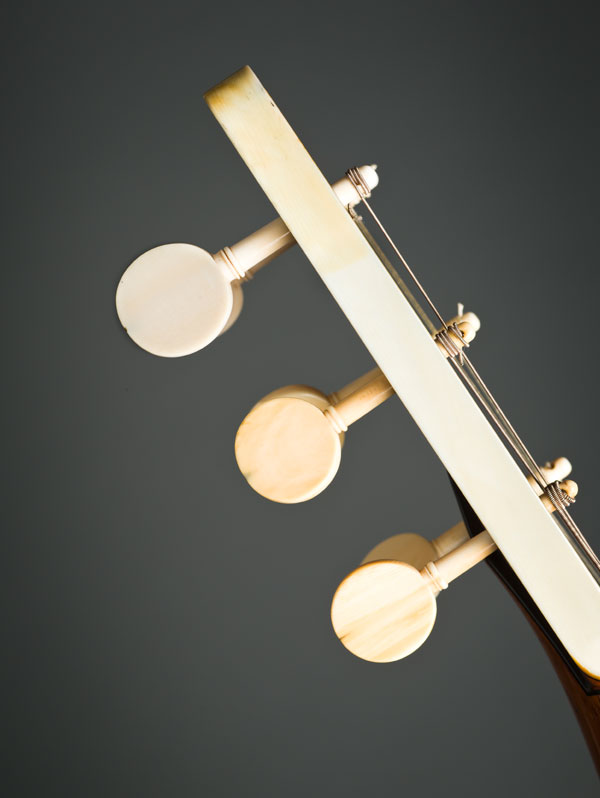 The name of Martin has resounded across the guitar world for more than 175 years. Marking the phenomenal influence of this family firm on our musical culture, a new exhibition and concert pays tribute.

Joan Baez, Johnny Cash, Eric Clapton, Bob Dylan, Elvis Presley, Sting, Hank Williams… the roll call of owners of guitars built by C.F. Martin & Co. goes on and on. It’s no surprise, then, that the ambition of anyone who loves playing guitar has been to own a Martin instrument. They are the quintessential American guitar.

2011 saw the 175th anniversary of C.F. Martin & Co., one of the oldest family-owned businesses in the United States, and what that means is that there is a strong market for the very best vintage Martin guitars when, on rare occasions, they come up for auction. A major international sale in New York (Christie’s “Country Music Sale”) in 2009 included no fewer than 78 guitars by Martin with prices ranging from a modest $1,875 up to $134,500 for Hank William’s D-18 (1947).

Paying a special tribute to the Martin guitar is the Metropolitan Museum of Art, New York, with an exhibition entitled “Early American Guitars: The Instruments of C. F. Martin,” on view January 14, 2014 through December 7, 2014. The exhibition will include approximately 35 instruments from the Martin Museum in Nazareth, Pennsylvania, the Metropolitan Museum, and several private collections.
Click here to visit the website of the exhibition.

For most of us, however, it’s not enough just to look at these fine instruments – we want to hear them played! And we can do just that if we check in to a gig with Rosanne Cash & Friends at the Grace Rainey Rogers Auditorium on Saturday, February 22, 2014.

Martin guitars have a long history with the Cash family. The black D-35, made for Johnny Cash, became not only the musician’s signature guitar, but it also became an iconic image associated with him. Grammy Award–winning musician and writer Rosanne Cash celebrates her family’s history with these iconic guitars through this program featuring music written and performed on the legendary Martin instruments.

Founder Christian Friedrich Martin had moved from Vienna to the United States in 1833, settling first in New York City and moving later to Nazareth, Pennsylvania. In the United States, Martin encountered the Spanish guitar style and incorporated elements from that tradition into his own Viennese style of instrument construction. The result was a new form of guitar, a style that would become important as a basis for other American guitar manufacturers.

The early Martin guitars were totally handcrafted instruments, made on a one-by-one basis, and there was little standardisation, the company tells us. However, there were a few features that were commonly incorporated in most of C. F. Martin’s instruments. Until the mid-1840s, Martin guitars were characterised by a headstock that had all the tuning keys on one side. Martin acquired this design from his teacher in Vienna, Johann Stauffer. The headstock design with all the tuning keys on one side was discontinued by Martin and went unused until Leo Fender resurrected the design in 1948 with his Telecaster guitar.

Another feature of the early Martin guitars was an adjustable neck. A screw mounted in the back of the heel of the neck was extended into the neck block. At the top of the dovetail (where the neck joins the body) was a wooden fulcrum about which the neck could pivot up and down. With the strings attached, the neck could be adjusted via a clock key inserted into the heel. While the adjustable neck allowed the player to adjust the playing actions of the guitar, the device was complicated and prone to slipping under full string tension. So gradually, Martin phased out this unique neck adjustment.

The firm of Martin has made many different models and this means that the catalogers and collectors have been kept busy. Of recent interest and growing popularity is the “parlor guitar.” As the name suggests, this is a smaller guitar than its larger concert cousin, and one artist who has frequently played and recorded with this small guitar is Sting.

Martin & Co. proudly tell us that Sting “discovered a small acoustic treasure: the Mini Martin Size 5 ‘terz’ guitar. Just when he first encountered one of these little wonders is unknown, but he was among the first to order a Mini-Martin, similar to a 5-28, when it was introduced as a Special Edition in 1999. He clearly loves the instrument’s 12-fret (to the body) design and bright, chime-like ‘terz’ tuning and tone, which is a minor third above standard pitch. In 2003 he purchased a second Size 5 that he used to record the beautiful song Dead Man’s Rope on Sacred Love. He also acquired a rare Baby Ditson built by Martin in 1916 and played it on stage and on television appearances during the Sacred Love tour. He enthusiastically suggested a Size 5 when approached regarding a new namesake Martin and played an integral role in creating the Size 5 that now bears his name, ‘The Sting: Mini Signature Edition’.”

The company has an exceptional range of models, ensuring there’s a style that will suit every player. What makes a Martin guitar special is its unique “voice” and tone, coupled with this it is an easy playing action. All this comes together through the experienced handling of the finest tonewoods – spruce, maple, cedar, rosewood, etc. – and of course a deep understanding of guitar design and development, topped off by high-class craftsmanship.

In 1904, Frank Henry Martin wrote: “How to build a guitar to give this tone is not a secret. It takes care and patience. Care in selecting the materials, laying out the proportions, and attending to the details which add to the player’s comfort. Patience in giving the necessary time to finish every part. A good guitar cannot be built for the price of a poor one, but who regrets the extra cost for a good guitar?” One hundred and fourteen years later, C.F. Martin says that this policy is still central to the company’s ongoing commitment to quality.

Opera and Ballet: The Exotic Season in Turkey, 2014