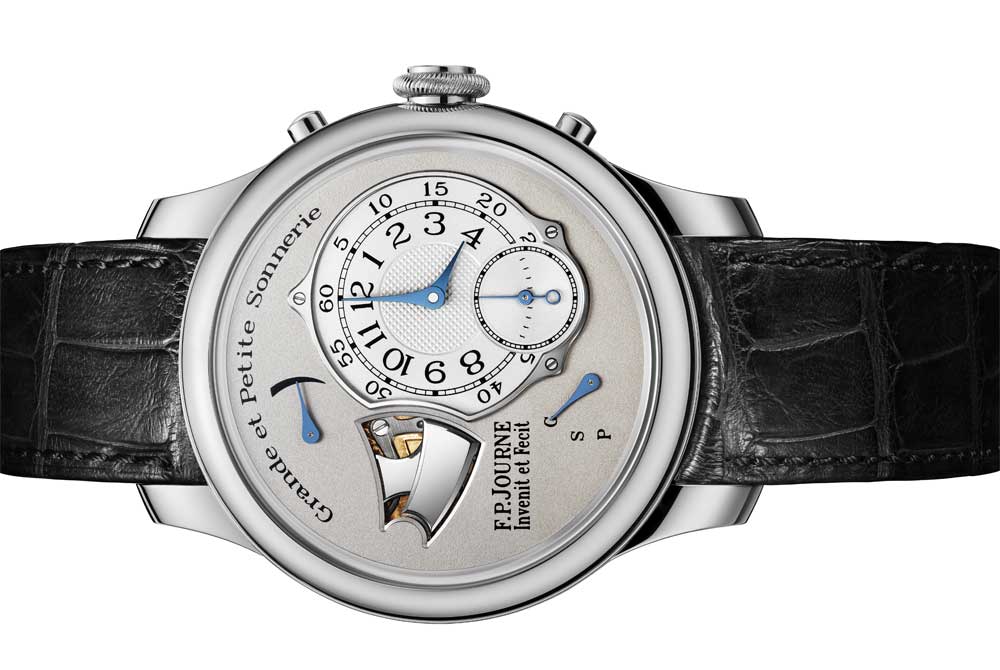 A great watchmaker explores the measurement of time with a unique sense of creativity and innovation. Here, Glenda McCauley profiles two of the leading Swiss watchmakers, both with long histories of ingenious design and superb craftsmanship.

Inspired by what he still views as a ‘golden age of watchmaking’ (the eighteenth century), a young François-Paul Journe was compelled by Abraham-Louis Breguet, and Antide Janvier among others, who triggered his first deep-felt horological emotions. Fascinated by what these men were able to accomplish with the means at their disposal, and wanting a tourbillon above all, he began the construction of his first tourbillon pocket- watch at the age of twenty.

Seeking independence, this led him to set up a craftsman’s workshop on rue de Verneuil, where he received visits from a select circle of informed collectors who commissioned him with making some one-of-a-kind creations. The many watch awards he received from around the world encouraged him, and soon enough the great names in the world of luxury and watchmaking were calling upon his talents to develop and create innovative movements.

Today, François-Paul Journe’s creative, intellectual and inventive thought process remains identical to that of when he was a young craftsman. As a result, he has followed in the footsteps of his horological heroes in creating uncompromising innovative timepieces which boast timeless design and intricate craftsmanship.

‘This is the result of more than thirty years of research and outstanding watchmaking,’ explains Brigitte Bocquet-Makhzani of Montres Journe SA.

‘It has also taken thirteen years of effort and tireless work to place his haute horology manufacture as a benchmark among the most prestigious watch companies.’

Loyal to his definition of high horology and his immoderate love of watchmaking, F.P.Journe creates mechanisms that constantly aim to enhance the running and precision of the mechanical watch. Always keeping an eye on history, he creates timepieces from which authenticity and technical innovations respect the ethics and research, at the time pursued by the great French masters.

‘Constantly seeking perfection, the manufacture is a world in itself, embodying excellence, know-how and innovation; values that are so dear to enthusiasts of outstanding watches,’ says Bocquet-Makhzani. ‘François-Paul Journe made every effort to verticalise his production to offer timepieces with an authentic manufacture calibre.’

Excellence and precision are the essence of a F.P.Journe watch, with all the movements of its watches produced in 18ct rose gold—an extremely unique feature of the brand. All watches are also engraved with the label ‘Invenit et Fecit’ – meaning ‘invented and made’ and certifying that each of the watches carrying his name results from an entirely original conception. Interestingly, each watch is made by one watchmaker and carries with it the number of hours the watchmaker has spent with it.

Just a few of the company’s great designs include entirely new mechanisms such as the Chronomètre à Résonance, the Sonnerie Souveraine and the ultra slim Répétition Souveraine—which is the flattest and lightest complicated watch of all. Notably, the Sonnerie Souveraine which chimes 35,040 times a year was awarded the prestigious Golden Hand Prize at the Grand Prix d’Horlogerie de Genève awards (GPHG) 2006, while the emblematic Chronomètre à Résonance—regarded as one of the wildest challenges ever in the field of the mechanical watch by featuring two mechanical hearts beating in opposition—was awarded the Grand Complication Prize at the GPHG 2010.

Understandably, this constant quest for precision and innovation has ensured the brands recognition by award providers around the world, cementing François-Paul Journe as the natural link between the golden age of horological science and contemporary watchmaking.

With a limited production of less than 900 timepieces per year, the company has opened eight boutiques under its own name in Geneva, Paris, New York, Miami, Boca Raton, Tokyo, Hong Kong and Beijing. Here, they offer a service corresponding to its philosophy and rigorous craftsmanship, with the ultimate aim to provide exceptional watches for collectors and watch aficionados alike.

For over a century, Audemars Piguet has devised endlessly inventive horological masterpieces. Dating back to 1875, the company was established when Jules Louis Audemars decided to join forces with Edward Auguste Piguet in order to develop and craft watches. Creating designs equipped with complex mechanisms, they shared a passion for watchmaking and the art of precision.

Today, this mastery still characterises the renowned brand, as Audemars Piguet remains the oldest fine watch-making manufacturer still in the hands of its founding families. By result, this has given the company an independent streak that allows it to go its own way and follow its own unique vision – one of excellence, creativity and innovation with each timepiece offering a unique conception and execution that makes it both a timeless and personal expression of intricate sophistication.

Based in the village of Le Brassus in the Vallée de Joux, Switzerland—also known as the cradle of fine watchmaking—Audemars Piguet manufacture has always made a point of outstanding pieces, from the first Grande Complication pocket watch presented in 1882, to more recent models such as the Jules Audemars and the Royal Oak. As with every major art, the watchmakers at the Audemars Piguet manufacture had to master all the classic rules of their art before being able to reinterpret them in a way that conforms to contemporary tastes.

The company has also written some of the finest chapters in the history of haute horlogerie, including a number of world firsts such as the development and production of the first minute repeater wristwatch in 1892, the world’s thinnest wristwatch in 1946, and the first self-winding Grande Complication watch in 1996, plus many more.

Boasting numerous masterpieces, Audemars Piguet designs are created in limited series and embody a remarkable degree of horological perfection, including daring sporty models, classic and traditional timepieces, splendid ladies’ jewellery-watches, as well as one-of-a-kind creations. Just last year, they celebrated the 40th anniversary of the Royal Oak—undoubtedly the most famous luxury sporting reference in the history of the wristwatch. Created by Gerald Genta in 1972, this timepiece with its powerful and easily recognisable lines, sold today in a Grande Complications version, is pushing watchmaking forward into the third millennium.

To give further expression to its pursuit of creativity and innovation, Audemars Piguet recently announced a long-term Associate Partnership with Art Basel. ‘The story of Audemars Piguet is in particular one in which art and craft are closely intertwined,’ explains Audemars Piguet CEO, François-Henry Bennahmias. ‘We look forward to forging closer ties with the world of contemporary art and to developing a fruitful long-term collaboration with Art Basel.’

Sited in Hong Kong, Basel and Miami Beach, the series of art shows allows guests the opportunity to discover the world of the masterful Swiss watchmaker alongside works of modern and contemporary art. Here, Audemars Piguet introduce visitors to its place of origin, Le Brassus, in the remote Swiss Vallée de Joux. They also present a selection of its exceptional historic and contemporary timepieces including highlights from the brand’s 2012 global touring exhibition, From Avant-garde to Icon, which celebrated the 40th anniversary of the groundbreaking Royal Oak. Not only does this give visitors the chance to view a retrospective exhibit about this iconic timepiece, but it also showcases other classic pieces from the brand’s sensational 138-year history.

With twenty-three boutiques worldwide, the great Swiss manufacturer has just added another following the recent opening at the Bal Harbour Shops in South Florida. Bringing the ‘manufacture to the boutique’, this outlet will further showcase the story of Audemars Piguet’s history, craftsmanship and exquisite design.