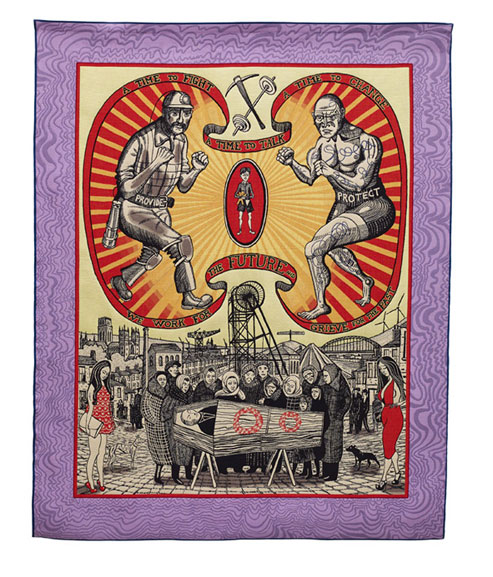 Grayson Perry’s latest exhibition, the somewhat ironically titled: The Most Popular Art Exhibition Ever! is set to comment on the political state of the UK. Topics such as Brexit and other relevant themes like masculinity and identity will take center stage. The event will run from 8 June-10 September—fittingly beginning on the day of the general election.

Perry describes his fun and mocking title as ‘a kind of provocation’ and insinuates that the exhibit will take a deeper look into the meaning of popularity within the artistic sphere. He makes a point that the exclusivity of certain art exhibitions can even be the sole reason for their appeal. Throughout history, there seems to be a pattern of those who dislike what is popular or ‘trendy’—simply because of the perceived attachment of commonality. Luckily, attitudes to art have begun to bend; the 90s saw an influx in new contemporary artists and modern galleries created to enthrall the masses. Since then, the viewing of art has transformed from a members’ only club to an all walks of life welcome affair.

Perry was the first ceramicist to win the Turner Prize back in 2003. He received critical acclaim for other of his solo exhibitions including: Tomb of Unknown Craftsmen at The British Museum 2011 and My Pretty Little Art Career at the Museum of Contemporary Art, Sydney, in 2015. His keen interest in demographics influences his decision to base his exhibitions on universally human subjects. Likewise, his alter ego, Claire, is a huge part of his individuality and is known to inspire his art. The exhibition will feature a plethora of intricate and interesting forms of traditional media such as ceramics, tapestry, printmaking and metalwork. It’s not an event to be missed.

If you have enjoyed reading this article on Grayson Perry’s latest exhibition, click here to read more on Arts and Collections about safeguarding the arts.