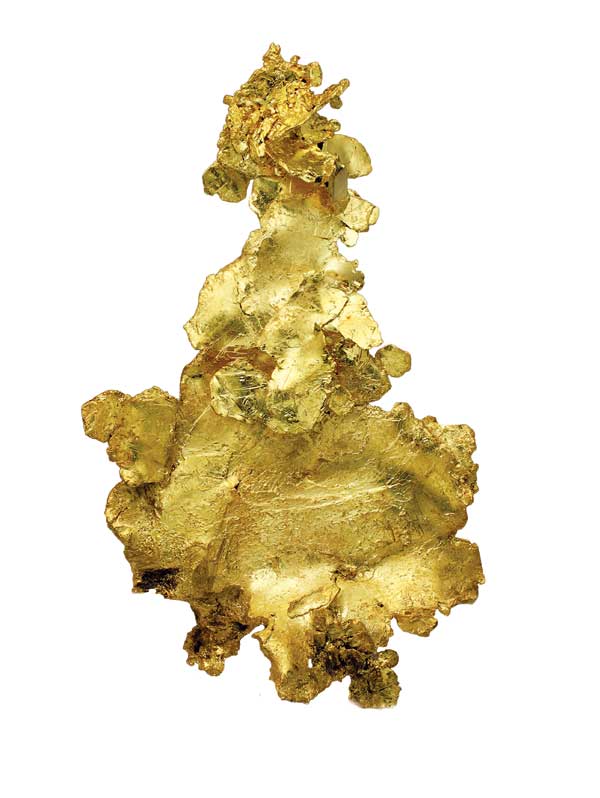 Gold has always cast a spell, offering collectors the double attraction of craftsman-made pieces that are also worth their weight as an investment.

Have you heard of the Mojave Nugget? It was found in the Stringer district near Randsburg, California, by prospector Ty Paulsen using a metal detector in1977. Amazingly, the nugget exists just as it was found—a solid chunk of gold, weighing in at more than 10 pounds, that’s 156 troy ounces. So, at the current dollar rate, the nugget would be valued at around $255,996 at least.

You can see this nugget as part of an exhibition, ‘California Gold’, at the Bowers Museum in Santa Ana, CA, until September. The exhibition highlights some of the finest examples of native California gold as it is found in its natural form, as leaves, crystals and nuggets.

These specimens on display are supplemented with very rare items from the rush era, including books, maps, and instruments.  And there’s a selection of artefacts that put a focus on the treasure from the SS Central America, sometimes referred to as the ‘Ship of Gold’. This ship was carrying 35,000 pounds  from the California goldfields to the national Mint in Philadelphia when it sank off the coast of South Carolina in 1857, taking with it the lives of some 400 passengers.

Aside from the human loss, the loss of so much value in gold was so severe that it caused a major economic panic for the United States. However, the ship rested undisturbed until recovery teams located it as recently as 1987. The treasure was valued at some $200 million. This exhibition also features specimens from one of the most successful California mines of the twentieth century, the Oriental Mine located near the small town of Alleghany in Sierra County. Today, there are few commercial mines still working in California, but the Oriental Mine is an example of how it can still be recovered from the ground 162 years after the California Rush.

While we may marvel at the gold artifacts and coins in museum glass cases, and look in wonder at gold recovered from sunken treasure ships, there is also the brisker atmosphere of modern commerce and investment that reminds us that this precious metal is still, as it has been for hundreds of years, the standard by which many national monetary systems are measured by a fixed weight of gold. And your personal investment in gold also remains one of the safest havens for your money.

However, it also pays to be cautious with your investment in bullion because the prices of gold can vary according to where you buy it and in what quantity. The rule tends to be, the larger your investment, the better the deal you will get. If you have sufficient funds, then bullion bars would be the way to go. These can be as small as one or half-ounce (or even one-sixteenth ounce) bars or as large as 3-pound bars or even the 400-ounce bars, although purchasers of this size of bullion bars would be very rare.

One investor, who prefers to remain anonymous, recommends buying small amounts on a regular basis: ‘Like a quarter, half or a full ounce at a time. It makes your investment more fun because it keeps you in touch with the changing gold rates. I often check out eBay because here you’ll get a good idea about the current value of gold from the prices investors are bidding. That’s what you need to know—what prices people are buying at, not the dealers’ selling prices.’ Current bidding, for example, on a 1-ounce Credit Suisse gold bullion bar suggests the going rate may stick at around $1,700-1,750.

Your bullion sits comfortably and quietly in the vaults of your bank, but how much pleasure are you getting from it? After all, this soft yellow metal is a tactile substance, one that men and women have wanted to adorn themselves with ever since its prehistoric discovery. Might we not just as well invest in jewellery and enjoy the pleasures of actually wearing our investment? To this, there are many who answer—yes!

Investing in jewellery may mean that you will soon start a collection, something that can become a fabulous family heirloom—even if it did start out as a solid investment idea. With more and more high-profile contemporary collections focusing on the glories of gold, its vitality and versatility, its color, texture, preciousness and meanings, the collector is also in a unique position to commission unique pieces from today’s leading artist-craftsmen.

India is today’s largest market for gold jewellery in the world, producing more than 748 tonnes per annum; coming as no surprise, it is China that has second place, accounting for 400 tonnes and rising each year, while the United States also produced a significant 129 tonnes of jewellery in 2010 and this figure continues to increase steadily. So, in order to invest in the best of the best gold jewellery, you certainly don’t have to stray from home territory.

Just in case you were to need any further assurance that gold investment and gold collecting remains a very solid option, the world Gold Council informs us: ‘Global demand for gold in 2011 rose to 4,067.1 tonnes, worth an estimated $205.5 billion—the first time that global demand has exceeded $200 billion and the highest tonnage level since 1997, according to the World Gold Council’s Gold Demand Trends. The main driver for this increase was the investment sector, where annual demand was 1,640.7 tonnes, up 5 percent on the previous record set in 2010 and with a value of $82.9 billion. The pre-eminent markets for investment demand in 2011 were India, China and Europe… The value of jewellery demand in 2011 reached a new annual record of US$99.2billion.’

If, on the other hand, you’re Stateside and you’re feeling lucky and want to follow the example of prospector Ty Paulsen by picking up your metal detector, there may not be much chance of finding a 10-pound gold chunk like the Mojave Nugget, but there are a number of individual states in which major amounts of gold have been found—and who knows what’s still there? Remember this: It’s been said that in three out of every five states, you have a decent chance of finding gold for yourself. Exactly which states these are, why should I say, especially as I’m feeling lucky myself.