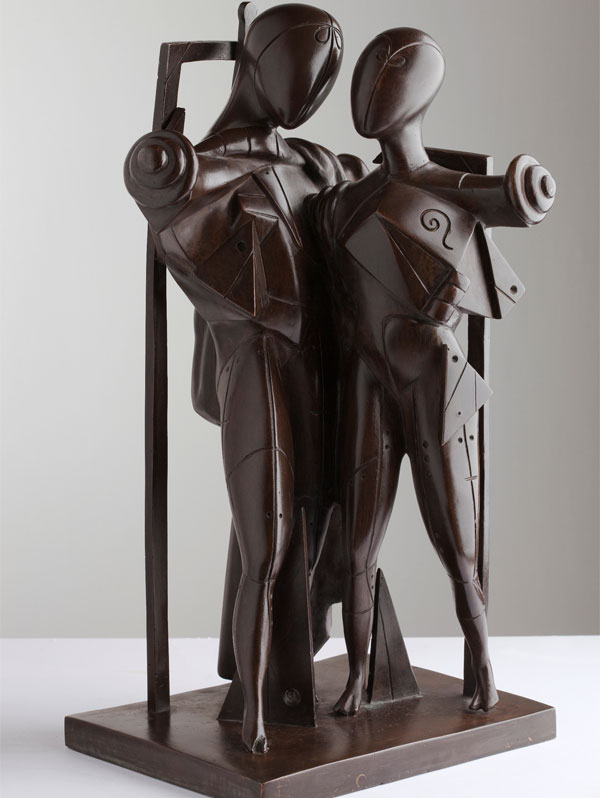 The exhibition Giorgio de Chirico: Myth and Mystery, on view at London’s Estorick Collection of Modern Italian Art from 15 January to 19 April 2014, will be a wonderful opportunity to explore the enigmatic world of Giorgio de Chirico.

Organised with Bologna’s Galleria d’Arte Maggiore, with which the Estorick recently collaborated on the successful exhibition of etchings by Giorgio Morandi, it will feature some twenty rarely seen sculptural works as well as a selection of drawings and paintings on related themes by the father of Pittura metafisica.

De Chirico (1888-1978) was born in Greece to Italian parents, and his education and immersion in Greek culture instilled an enduring fascination with classical subjects from an early age. He studied painting in Athens, Florence and Munich, where he was influenced by the Symbolists as well as the philosophy of Schopenhauer and Nietzsche, particularly the latter’s belief that ‘underneath this reality in which we live and have our being, another and altogether different reality lies concealed’.

Between 1910 and 1915 he established the characteristic iconography of Metaphysical painting: mannequins, illogical perspectives, incongruously juxtaposed everyday objects and deserted city squares. Such imagery exerted a decisive influence on the work of the erstwhile Futurist Carlo Carrà when the two artists met while undertaking military service in Ferrara during the First World War.

A number of other painters and poets gravitated towards what became identified as the Scuola metafisica around this time, including Filippo de Pisis, Giorgio Morandi and de Chirico’s younger brother, who adopted the pseudonym Alberto Savinio.

Metaphysical painting also had an enormous impact on the development of Surrealism in Paris during the 1920s, anticipating its fascination with the irrational and the workings of the subconscious. In fact, even before the First World War, de Chirico had declared that ‘to be really immortal a work of art must go beyond the limits of the human: good sense and logic will be missing from it. In this way it will come close to the dream state, and also to the mentality of children’.

De Chirico revisited and elaborated on Metaphysical iconography throughout his career, alongside works of a quite different character in which he explored Renaissance and Baroque imagery. Other thematic preoccupations also emerged over the years, such as the series of Mysterious Baths, as well as imagery concerning gladiators and galloping horses—subjects also represented in the selection of works on display.

Spanning a period of approximately forty years from the late 1920s onward, this exhibition explores de Chirico’s lasting obsession with certain motifs, themes and subjects, and the peculiar power of their translation into three dimensions.

Although de Chirico’s name is most closely associated with painting, sculpture was a continual source of interest. The depiction of statues was a constant feature of his pictorial work and, in 1927, de Chirico wrote a brief essay on the subject of sculpture in which he noted how ‘in the museum the appearance of the statue […] is similar to that of people glimpsed in a room we thought was empty.

The lines of the walls, the floor and the ceiling separate the statue from the outside world; the statue is thus no longer a figure destined to merge with nature, the beauty of the landscape, or to complete the aesthetic harmony of an architectural construction; it appears to us in its most solitary aspect, and is rather a spectre that shows itself to us and surprises us’.

De Chirico began to experiment with sculpture towards the end of the following decade, creating terracotta versions of the mysterious figures that had long populated his paintings with a particular emphasis upon his singular re-imaginings of characters from classical mythology such as Orpheus, Castor, and Hector and Andromache, with them depicted as tailors’ dummies or automatons.

During the 1960s he began to produce bronze casts of such works and, subsequently, devoted himself to the creation of multiples in silver patina and gilded bronze; it is these late pieces upon which the exhibition focuses in particular.  Such was the success of his work in this field that in 1972 he was awarded the Ibico Reggino Prize for Sculpture ex aequo with Henry Moore.

The works on display include a bronze re-working of the mannequin-like figures from de Chirico’s famous painting of 1917 entitled The Disquieting Muses, faithfully replicating the self-contained forms of the original.  Indeed, all of the sculptures approximate the stylistic qualities of the pictorial imagery upon which they are based, as in the rougher, looser handling characteristic of works such as The Archaeologists.

This piece relates to de Chirico’s work of the 1920s, when his figures were no longer only surrounded by architectural elements, but also became fused with them.  It reproduces the more fluid modelling and atmospheric brushwork typical of this later phase of the artist’s career that can also be seen in works on paper such as Fight of Horsemen and Infantrymen.

Focusing on an aspect of de Chirico’s oeuvre that will be unfamiliar to many, this exhibition will expand visitors’ appreciation of a great artist—one of the few undisputed geniuses of 20th century European culture—and will vividly evoke that sense of magic and surprise that de Chirico himself associated with sculpture and statuary.