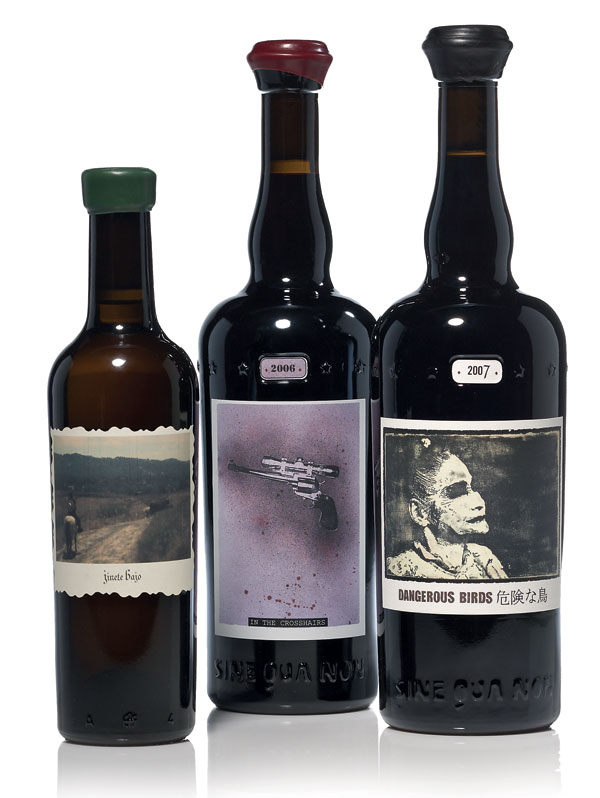 Small is indeed beautiful as the developing trend in wine today comes from the microwinery and microchateaux, producing the newly labelled Garage Wine or vins de garage—cult wines that are very appealing for both connoisseurs and collectors.

For your weekend wine, many of us may be perfectly content with a favourite from our local store. However, for the true connoisseur and wine collector, fine wines can become an obsession, and obsession is what defines a collector. The emergence of cult wines means that there are now interesting alternative options to the established U.S. and European classics. France has its ‘Garage wine’ or ‘Vins de garage’, while California, in particular, has Screaming Eagle, Harlan, Colgin, Sine Qua Non, and Araujo, which are just some of the ‘Cult California’ wines that are currently attracting the connoisseur’s attention at select auctions of fine and rare wines.

The intentionally provocative vins de garage emerged in France in the 1990s when small winemakers challenged the traditional establishment and old-fashioned styles of the Bordeaux wines. They tracked away (and still do) from those high-end classics, the great cuvées, boasting a far bolder, bigger and fruitier wine than is customary for that highly refined wine region. So, rather like the 1980s beer trend in some parts of the world for microbreweries, wine has its counterpart with the microchateaux.

And they exist not only in some of the classic wine regions of France, but garage wines are also appearing in Spain and Italy. Where these vins de garage score for wine collectors and investors is their scarcity due to low production and, frequently, the wines’ high tannin content which makes them ideal for a long aging processes, along with a pleasing accruement in value with the passing years.

Some of these virtually unknown wines have been fetching high prices—mostly via internet auctions—and in 2000 the New York Times picked up on this development and ran a story headlined: ‘$1,000 Wines You’ve Never Heard Of’.

Is a high-priced wine collectable because of its price tag? In some instance that would seem to be the case: one wine supplier has commented that they could not sell bottles at $78 but when they increased the price to $125, they sold out. The wine experts say that this microwinery trend is here to stay which, on all counts, is good news. It could be argued that the U.S. cult wine producers have been ahead of their European counterparts for some time, with ‘California Cults’ frequently making an appearance in some of the leading fine wine auctions. Here are just three of the leading California Cult wineries:

Roughly translated as, without which it cannot exist, this collective winery was formed in 1994. The winery is in Ventura, not far from the Santa Barbara vineyards where the fruit is sourced from the region’s best vineyards. One key selling point is that each vintage produces a unique wine and therefore each vintage is given a unique name. And the names are way out from the traditions we’ve known for so long—for instance there’s ‘whisperin E’, ‘Rien Ne Va Plus’, ‘The Straw Man’, ‘Just For the Love of It’ and ‘hollerin M’, to name just a few of these high-class blends.

The winemaking philosophy here is to work in very small batches, while adopting gravity flow and natural yeasts whenever possible, a lengthy ageing process for the whites and repeated racking for the reds. With an echo of the New York Times story previously mentioned, Forbes referred to the brand as ‘the most coveted California wine you’ve never heard of—there’s a six-year waiting list to get on the list to buy the Syrahs, Roussannes and sweet Sémillons.’

Harlan Estate is the result of a 20-year search by founder H. William Harlan for prime hillside vineyards where the importance of location or terroir is the key factor. What resulted was the patchwork acquisition of 230 acres above the fabled Rutherford-Oakville beachlands. Harlan considered these oak-studded knolls and valleys ideal. Currently only a small percentage of the acreage is under vine.

The wines are to die for and so are the prices. The 2007 Harlan Estate (1.5l) has been listed at $2,999.99 by one dealer. But if you have a spare three grand, it’s probably money well spent if we listen to leading wine critic Robert Parker, who says of this wine: ‘This prodigious 2007 Harlan Estate reminds me of a hypothetical blend of the 2002 with a touch of the controversial 1997.

Dense plum/purple-coloured with sweet aromas of barbecue smoke, blueberries, blackberries, cassis, liquorice, hot rocks and subtle oak, it is a splendidly opulent, pure wine with a skyscraper-like texture as well as stunningly deep fruit that expands gracefully across the palate. The finish lasts nearly a full minute.

Because of its overwhelming richness and sweet tannins, this brilliant wine seems to be approachable now, but I suspect further nuances and complexity will emerge after 4-5 years in the bottle. This wine will still be going strong at age 25-30. Like the offerings from its sister estate, Bond, these Harlan Estate offerings are uncompromisingly brilliant examples of Napa viticulture and winemaking at its finest. Kudos to proprietor Bill Harlan.’

Perhaps the best known of the California cult wineries, Screaming Eagle Winery and Vineyards, was founded in Oakville in 1986 by Jean Phillips, producing a first vintage in 1992 (released 1995). The winery’s production is of the highest quality but tiny (only some 7-800 cases a year) which has made the wines extremely collectable, with top prices paid. A 2008 Screaming Eagle (750ml) was recently listed at $1,849.99 and the brand regularly fetches more than $1,000 a bottle. However, if you’re lucky enough to get onto the winery’s elite mailing list you could buy the same wine for $300.

In 2006, Jean Phillips sold her enterprise to Charles Banks, money manager to NBA players and other athletes, along with his business partner Stanley Kroenke, owner of Denver Nuggets. Screaming Eagle continues to hold its place as California’s most coveted wine brand.

If you’re thinking of starting your own microwinery, experts say you can produce 4-500 cases annually on less than ten acres—but they have to be pretty special acres. For those with more modest intent, and with so many investment sectors currently unstable, the intrepid investor may well find that the fine and rare wine market offers an opportunity that is as safe as some sectors and safer than many—with the added bonus, of course, that you might just have to sample a portion of your investment.