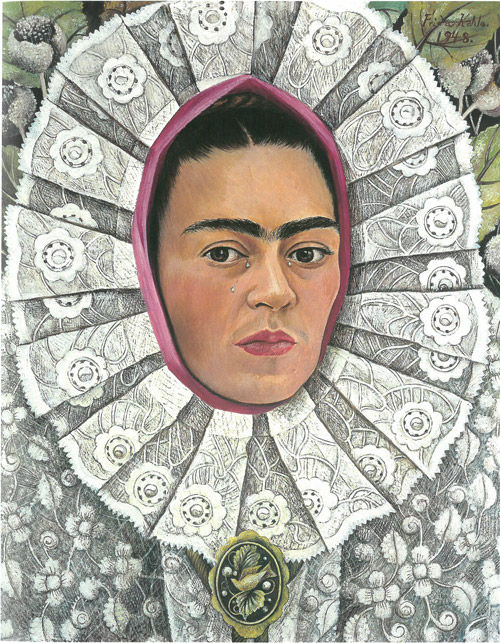 Her artwork is avidly collected by Madonna, she appeared on a bracelet worn by Theresa May and her iconic style has influenced the aesthetic of Gucci’s autumn/winter 2017 collection. Even today, her face remains a symbol of hope, resilience and empowerment. Magdalena Carmen Frida Kahlo y Calderón—commonly known as Frida Kahlo—was born 6 July 1907 in Mexico.

Her artwork is often praised for its progressive outlook and stirring visual concepts. Kahlo’s influence on art, fashion and politics has trickled down into modern-day culture, making a considerable mark on today’s society.

Frida Kahlo’s father was born in Germany, while her mother was of primarily indigenous and Spanish descent. Although their marriage was quite unhappy, they had four daughters together—Frida being the third. When the Mexican Revolution broke out in 1910, Kahlo was only three years of age.

She was famously quoted saying she was born the same year as the revolution, inferring that she was the embodiment of Mexico’s reawakening. Kahlo and Mexico were inextricably bound by revolution and renaissance. Within her writings, Kahlo described memories of her mother ushering her and her sisters into the house as gunfire echoed through the streets of her hometown. Such events left a lasting impression on Kahlo and ultimately steered her political stance.

Kahlo’s childhood was plagued by a series of unfortunate events. At six years old she contracted polio; this disability made her left leg shorter and thinner than the other. Later into her teenage years she was involved in a road traffic accident. She recalled the event in vivid detail: ‘The handrail pierced me as the sword pierces the bull’.

The accident—which resulted in several serious injuries—meant she suffered from recurring pain for the remainder of her life. It was at this stage that Kahlo abandoned her dream of becoming a doctor and began to follow artistic pursuits. At first she painted simply to occupy herself during her long recovery. Her mother even fashioned her a special easel so that she could paint from her bed. This blossomed into a passion that would establish her as one of the most influential artists and public figures in history.

Kahlo only produced around 200 paintings throughout her lifetime. She drew upon her personal experiences to enrich her work and impart her emotions onto the canvas.

Above all, she is remembered for her searing self-portraits, which employed a distinctive folk style. ‘I’ll paint myself because I am so often alone, because I am the subject I know best,’ she said.

Even for those who are unfamiliar with Frida Kahlo’s work or background, the artist’s distinctive appearance is immediately recognisable. Her furrowed brow, jet-black hair and prominent mouth established her as an iconic symbol.

Kahlo was famous for embracing her dark facial hair; it was an act of defiance against what she deemed to be old-fashioned and unrealistic perceptions of femininity. Within her self-portraits, her expression is often that of candor with an air of immersed contemplation.

Kahlo’s fashion choices also contributed to her persona. While women of her generation were mimicking western styles, she remained true to her roots by wearing authentic Mexican attire. She would even occasionally wear outfits created for men—an act that was unheard of in this era. Kahlo is often portrayed with her hair bound in plaits with a crown of native flowers, her arms adorned with bold ethnic jewellery.

Today, some of the biggest names in fashion have saluted Kahlo by incorporating her style into their clothing lines—Gucci being one of the most notable. Vibrant ruffles, oversized bows and intricate Latin-inspired embroidery have all been featured on the catwalk this year.

Kahlo’s style was a way of expressing herself, an act of empowerment. ‘She was one of the first women to use fashion to broadcast a feminist message of independence,’ said Susana Martínez Vidal, fashion and lifestyle journalist.

Kahlo’s paintings usually involved vibrant colours influenced by her Mexican heritage. While her artwork was mostly autobiographical, it also encapsulated strong characteristics of fantasy. As Kahlo’s career unfolded, it became clear that her art was an outlet for her pain.

Many of her pieces portray physical and emotional wounds that stem from her life experiences. Symbolism also plays a key role in Kahlo’s body of work; monkeys are one of the creatures that feature heavily. In Mexican mythology, monkeys are a symbol for lust. However, Kahlo depicted them as protective and tender creatures. Other taboo topics such as identity, abortion, abuse, post colonialism, gender and class also make an appearance within her paintings and sketches.

As Kahlo grew up, she retained a headstrong attitude to politics. As an adolescent, she belonged to the post-revolutionary Mexicanidad movement that sought to redefine Mexican identity. Later in life she participated in the Mexican Communist party and eventually the US Left Opposition, which broke the Stalinist Third International.

Her paintings often made explicit references to her political convictions. But, rather than merely reflecting her inner world, they began to transform into Marxist interpretations of reality—a term that she coined ‘revolutionary reality’. One of her best-known paintings, What the Water Gave Me (1938) reveals Kahlo’s leftist sympathies.

The painting depicts Kahlo in the bath, represented by her protruding legs from the water. Images from her personal life flood the scene: a dead bird, a skeleton upon a mound, the empire state building within a volcano and Frida herself drowning. The latter image serves to represent her own death but also as a metaphor for Mexico drowning under foreign domination.

There have been strong debates as to whether Kahlo’s unique style falls within that of Realism or Surrealism. The artist, Andre Breton considered Kahlo to be a fellow Surrealist; but she had an ambivalent attitude towards the movement. According to musings found in her personal diary, she merely drew reality as she saw it.

In 1928, Kahlo married the celebrated muralist, Diego Rivera. Kahlo admired his work and he eventually became her mentor. The two shared a passionate and volatile relationship that saw both spouses having affairs. On several occasions, the pair split and then returned to one another. Kahlo famously sent Rivera a number of passionate love letters stretching across the 27-year span of their relationship.

Sadly, Kahlo’s talent was not fully recognised during her lifetime. She was mainly known as Rivera’s wife until the late 1970s, when young activists finally discovered her work. Today, Kahlo’s image appears emblazoned on all manner of merchandise and fashion accessories from mugs and T-shirts to yoga pants and jewellery. She represents the resilience, pain and empowerment of a vibrantly fierce woman of the revolution.

If you have enjoyed this article: ‘Frida Kahlo: Resilience, Pain and empowerment’, click here to read more on Arts & Collections about Pablo Picasso.

A History of the Colour Orange