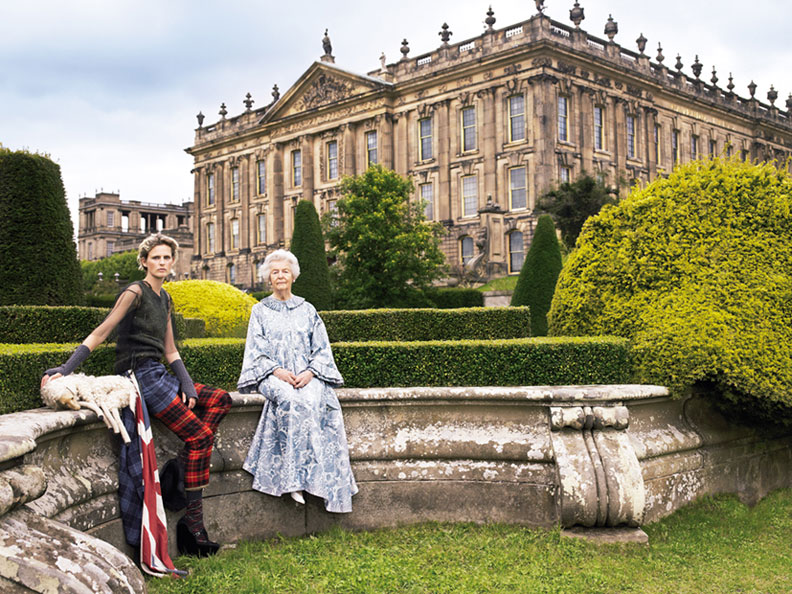 In a lavish and ambitious exhibition, Chatsworth House becomes the stage upon which the stylish legacy of the Cavendish family is revealed.

Sixteen generations of the Cavendish family have occupied Chatsworth House and—over the centuries—shared their heritage and style through their wardrobes. House Style: Five Centuries of Fashion at Chatsworth, running from 25 March until 22 October 2017, seeks to uncover the history, intricate beauty and bewildering grace of the characters that lived in the lavish manor.

The idea for the show was conceived when Lady Laura Burlington, fashion buyer and wife to the heir of the estate, was scouring the household’s textile rooms for a christening gown for her son. Amongst the dusty boxes, she found a plethora of valuable outfits ranging from stylish couture and livery to coronation robes.

After inviting fashion journalist and American Vogue’s editor-at-large Hamish Bowles to survey the collection, it became clear that the textile treasures had to be shared with the world. Six years of planning has resulted in the most extensive exhibition to grace the halls of Chatsworth—in fact, nearly every room in the large manor house is occupied with precious, historic items.

Bowles curated this monumental show with creative direction by Patrick Kinmonth and Antonio Monfreda. The team have enhanced the traditional setting of the estate and converted it into an Eden of glamour; each room exuding an air of opulence. The project has been sponsored by Gucci and the three-year long collaboration has allowed the major fashion brand to impart their ultra-modern flair onto the event. The juxtaposition of Gucci’s daring contemporary style with the manor’s bygone age, somehow, works harmoniously. The luxury brand has even used Chatsworth’s grounds—designed by architect Capability Brown—to stage their new ad campaign for their 2017 clothing season.

Visitors will be astonished by the utter detailing, design and flourish with which the dresses, cloaks, tiaras, accessories, uniforms, livery and gowns are presented. Whether the garments were worn frequently or were considered ephemeral, each have a fascinating story to tell. The exhibition itself is organised thematically, leading from art history to fashion, jewellery, archive material, design and textiles.

The collection brings to life the most illustrious and influential characters from the Cavendish family, demonstrating the power of their fashion statements. We are guided through a timeline from the founding of the house in 1552 and ending around the vibrant 90s.

Icons featured within the exhibit include Bess of Hardwick, a key influencer during the 16th century; the Duchess of Devonshire, Georgiana Cavendish, who was also known as the ‘empress of fashion’; and Adele Astaire, the relative and dance partner of Fred Astaire. Stella Tennant, a fashion supermodel, poses as one of the most contemporary faces of the show. Samples of her wardrobe and possessions form an interesting contrast between the old and modern eras.

Quirky and surprising items are scattered throughout the exhibit, giving guests insight into the lifestyle of the upper classes. A solid gold dog collar, nose ring, belt buckle and Elvis emblazoned slippers are just a few of these items on display. A series of woollen jumpers embroidered by Andrew Cavendish—the 11th Duke of Devonshire—pose as a comical tidbit, with snappy slogans such as ‘Never Marry a Mitford’ and ‘Bollocks’. This light-heartedness is echoed in various points throughout the exhibition. ‘There’s definitely a humorous thread that runs throughout House Style,’ explains Burlington.

Accompanying these quirky items are scrapbooks, letters and polaroids that provide further detail to the retrospective. Visitors will be able to grasp a more tangible sense of who the residents were, their beliefs and how each lived their lives. A drawer full of Georgiana’s bills is evidence of her extravagant nature, revealing outlandish spending on jewels and accessories. Many of her bills remain unpaid to this day.

Fashion aficionados will rejoice with the sight of Christian Dior’s pink Carmel gown (1953), which is guaranteed to turn heads. Other highlights include the exquisite couture garments designed by the likes of Jean Philipe Worth. Joining them are various contemporary items from well-known designers such as Gucci, Vivienne Westwood, Erdem, Alexander McQueen and Helmut Lang.

One of the most outstanding moments of the exhibit can be experienced within Chatsworth’s art collections, which span a staggering 4,000 years. Beneath the ornate 17th century ceiling painting, The Incredulity of St Thomas, is an evocative collection of mannequins adorned with christening gowns, funeral apparel and ethereal wedding dresses. The combination of overbearing surroundings and dramatic attire create a spectral feeling that will leave audiences dazzled.

The treasures within the exhibition conjure thoughts of rummaging through an old manor house’s dressing-up box—albeit a richer and more elaborate one. The wealth of memory attached to each piece will leave visitors with a lasting impression. With this exhibition, Centuries of Fashion, Chatsworth House is allowing visitors a peek into the traditions of a family described by Lady Burlington as ‘wonderful.’

When asked about the exhibition, Bowles remarked: ‘Chatsworth is a real treasure house. The characters of generations of Cavendish family members who have peopled its rooms, gardens and landscapes is revealed as vividly through their choice of clothing and adornments, as through the canvases and lenses of the great artists and photographers who have memorialised them through the centuries.’

If you have enjoyed reading this article, click here to read more on Arts & Collections about the history of fashion.