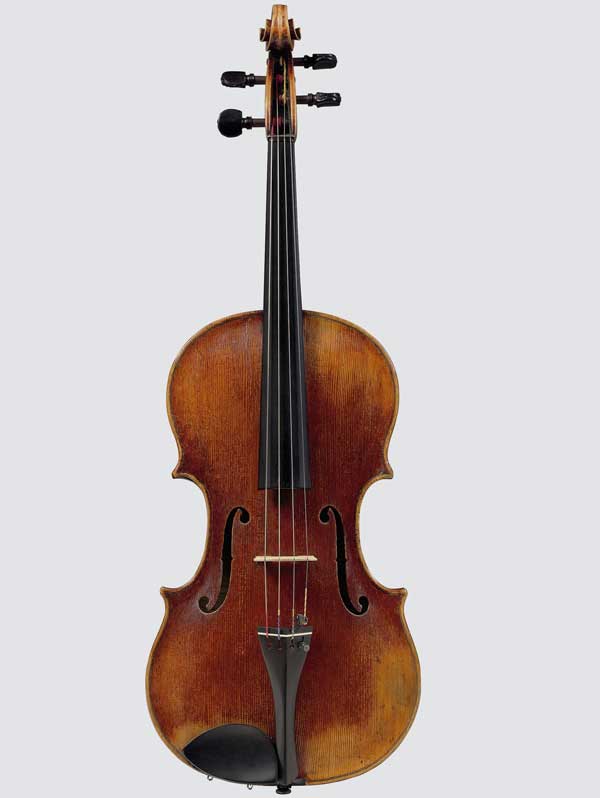 Works of high value have too often been copied, faked and forged, and fake musical instruments are no exception, in particular Stradivari and Salò violins. So when rare instruments make an appearance at auction houses, like a unique viola of 1575 at Christie’s New York, it often causes a stir.

If you think you own a violin made by Antonio Stradivari, because the label says so, you are very likely to be in for a disappointment when you take it along to a dealer for authentification. The fact is that Stradivari’s instruments are recorded and their provenances are very well known, as indeed is the case for the best-known of his contemporary instrument makers.

But this has done nothing to deter literally thousands of fake instruments from being produced over the last few centuries. Some of these fake instruments were purpose built for deception, while other instruments—violins, violas, cellos, typically—will have started life in an honest way, only to have their labels changed, to that of some famous Italian maker who flourished in the seventeenth or eighteen century.

Of course in modern times all the famous makers’ labels have been meticulously scrutinised and frequently catalogued, but the fakers and forgers of the nineteenth century in particular sometimes forgot to cross their t’s and dot their i’s, so to speak, so some pretty laughable forgeries appeared in long-passed sale catalogues ‘ascribed to Antonio Stradivari’. However, today’s top instrument specialists can spot whether an instrument is fake or not, were it to have no label at all.

How is this done? The identification of a bowed instrument, for example, as being by a particular maker, lies in the subtle design and execution of certain details. Familiar to the expert, in the same way that Bernard Berenson recognised the stylistic ‘fingerprints’ in Renaissance paintings, one instrument maker would cut the f-holes in a particular style and would carve the scroll in the headstock in an individual manner, along with many other tiny details such as the vaulted style of the belly and back that would identify that instrument as being from one particular maker.

Christie’s Kerry Keane, International Specialist Head of Musical Instruments, gives his own insight: ‘You open a case and the violin staring back at you has all of the correct attributes for a particular maker, and you can confidently attribute it to them. But there are about 12,000 listed violinmakers, historically, and no one person can know them all. So in some cases, the evaluation begins with your gut feeling. Sometimes, frankly, it just smells right. Then you begin an investigation to place it into the correct time period and school, and from there, determine the maker. It can be a marvelous journey of discovery.’

What created a big stir in 2013 amongst musical instrument aficionados was the appearance at Christie’s New York sale of a viola by the forerunner of Stradivari, Gasparo da Salò of Brescia, dated 1575. Kerry Keane admits he was concerned about the authenticity of this extraordinarily rare instrument: ‘I was a bit apprehensive, because the market is flooded with spuriously attributed works by this maker. But when we opened the case, I felt this one was right.

Visually the outline, arching, volute and even the wood choice all hung together. We ran a dating test called dendrochronology to analyse the age of the tree rings on the top wood, and discovered the growth rings on this example dated to 1570. We then learned the wood matched another viola and a violoncello by da Salò as well as multiple other recognised works from sixteenth century Brescian makers. Finally, I consulted with my colleagues in the field, all experts familiar with da Salò. As if by committee they all agreed with the attribution.’ The stunning viola was one of the highlights of the Christie’s April 2013 sale.

Not only did the da Salò instrument pass the experts’ close scrutiny, the viola also has impeccable provenance. What is heart-warming to note from the long list of owners is that this instrument has been consistently in the hands of professional players and, rather than being encased in glass as a museum item, this instrument is once again owned by a professional musician who paid $542,500 for this treasure in April 2013.

It may be that, in order to start a collection of fine instrument, you might begin in a lower price range than a da Salò or Stradivari. Here is Kerry Keane’s advice: ‘There are many top-of-the-line Italian violins outside of the Stradivarius family. A perfect example from the April 2013 sale is a violin by Carlo Giuseppe Testore.

The Testores were one of the two most important seventeenth and eighteenth century violin-making families in Milan. Their instruments have a consistently spectacular sound, and they are priced more reasonably than their Cremonese counterparts. Because they combine premium Italian quality with good value, they are a popular choice among professional musicians.’