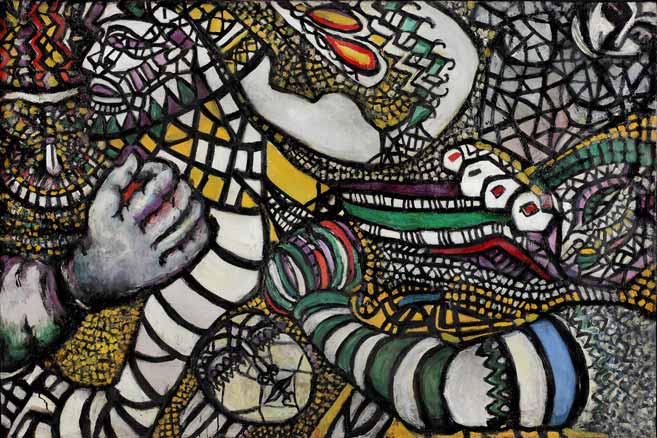 Zeid was born in 1901 on the island of Büyükada off the coast of Istanbul to a prominent Ottoman family of intellectuals and artists. Introduced to painting at an early age, in 1919 she became one of the first women to train formally as an artist in Istanbul when she enrolled at the Imperial School of Art. She later studied in Paris in the 1920s under the tutelage of critic and Cubist artist Roger Bissière, a period that would have a profound effect on Zeid’s art.

Zeid’s work in the first decades of her career danced between different styles, subjects and movements—from fauvism to cubism—and showed an increasing preoccupation with colour. She first came to public prominence in the early 1940s through her experimental work with the avant-garde Turkish group ‘Group D’.

Her work from this period reflects a distinctive, highly individual approach that blended western and eastern aesthetics. She held her first solo—highly successful—exhibition in her own apartment in Istanbul in the mid-1940s, and pieces from that show, such as Three Ways of Living (War) (1943) and Three Moments in a Day and a Life (1944) will be on display at Tate Modern.

A shift in focus

Zeid’s move to the United Kingdom in 1945 coincided with a shift in focus from figurative to abstract pieces, and it was a period of critical success for the artist, who lived between London and Paris as her husband, Prince Zeid El-Hussein—a member of Iraq’s ruling Hashemite royal family—worked as the Iraqi ambassador.

Notable pieces created during this time that reflect Zeid’s transition into abstract art include Fight against Abstraction (1947), with its bold use of black lines, and Resolved Problems (1948), whose vivid hues and motifs anticipated op and kinetic art. The peak of Zeid’s career as an abstract artist who fused eastern and western sensibilities in her work will be represented by key pieces from her important 1954 exhibition at the Institute of Contemporary Art in London, such as My Hell (1953), The Octopus of Triton (1953) and Sargasso Sea (1953).

Zeid and her husband were made to leave the luxurious surroundings of the Iraqi embassy when the Hashemite royal family was assassinated in a military coup in Iraq in 1958. Moving into a smaller flat and learning how to cook for herself, her culinary endeavours inspired new artistic experiments, with Zeid casting turkey and chicken bones on stained glass-like polyester resin panels—examples of which will be seen in the show at Tate Modern.

The latter part of her career saw Zeid switch back to the figurative painting of her youth, spending the last 20 years painting anti-naturalistic portraits of friends and family. Examples of these, such as the imposing Charles Estienne (1964), will also be on show. She saw out her last years in Amman in Jordan, where she set up her home as an informal art school for an international collective of female students. She died, aged 89, in 1991.