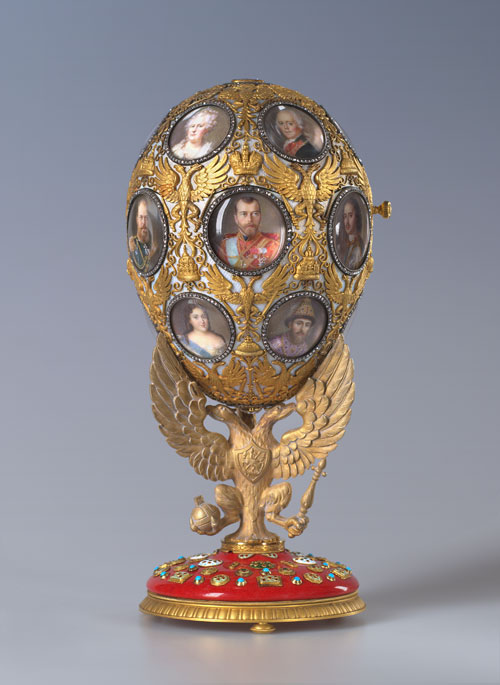 Made of gold and coated in white enamel. The first-ever imperial Fabergé egg—the Hen Egg—was made in 1885 for Tsar Alexander III.

It was the Tsar’s gift to his wife, Empress Maria Feodorovna, for Easter, one of the most important celebrations of the Russian-Orthodox ecclesiastical calendar. Inside it was a round golden ‘yolk’, which once opened revealed a gold hen set with ruby eyes, itself concealing a gold and diamond replica of the crown and a ruby pendant suspended on a chain. The gift was so well-received that Tsar Alexander placed a standing order with renowned jeweller Peter Carl Fabergé to produce an egg for his wife every Easter after that, requiring that each egg be unique and contain a ‘surprise’ within it. According to Fabergé family tradition, the company was given complete creative freedom for these imperial eggs and spared no expense.

When Alexander III died in 1894, his son, Tsar Nicholas II, decided to keep the tradition alive and commissioned two eggs a year, one for his mother Maria and one for his wife Alexandra. Though the exact figure is still unknown, it is believed that Fabergé made around 50 imperial eggs for the Romanovs between 1885 and 1917. These objets were made each year except 1904 and 1905, during the Russo-Japanese war.

In 1917, after Nicholas II’s abdication, the Romanovs went into exile. They were violently executed a year later. By that time, Fabergé’s workshop had disbanded, and the Fabergé family had left Russia. After the Bolsheviks took St Petersburg during the Russian Revolution, the 50 imperial eggs were transported to Moscow; many were sold, the ‘surprises’ within them given away separately. Out of the original 50, only 43 are known to still exist. Today, they are each worth millions; some are in the possession of private owners and others housed in prestigious museums and collections around the world.

Every egg, which was designed to be a piece of art in its own right, is a completely one-of-a-kind creation. Made from a wide range of materials including rock crystal and gold, these precious masterpieces were known to take around one or two years to create. They ranged in size, too; each between three to five inches tall. Although Carl Fabergé was at the helm of the process, he never participated in the actual construction. The eggs were left to be realised through the hard work of various craftsmen—from painters and metalsmiths to master diamond-cutters—all bound by the utmost secrecy.

Among the most famous examples is the Imperial Coronation Egg (1897), currently housed in the Fabergé Museum in St Petersburg. The gold and yellow enamel creation conceals a precise miniature replica of the 18th-century royal coach that carried Tsarina Alexandra to her coronation. Missing from the egg are a few ‘surprises’ including an emerald pendant and a glass-enclosed jadeite stand. Another notable Easter egg is the Fifteenth Anniversary Egg (1911). Made of gold, green and white enamel, this creation is decorated with various diamonds and rock crystals. Its designs commemorate the 15th anniversary of Tsar Nicholas II’s coronation. Unlike most eggs, this particular one wasn’t engineered to open or conceal a ‘surprise’.

These opulent objects enjoyed great fame from the start. Fabergé was commissioned to make similar versions for an impressive list of private clients, including the Duchess of Marlborough, the Rothschilds and the Yusupov Russian noble family. As many as 12 eggs were also created for nobleman and industrialist Alexander Kelch—who is most famously known for his gold-mining fortune—though only seven appear to have been completed. Their influence travelled well beyond Russia, too. Countless artists tried to make their own versions and designs, though none reached the same level of influence and fame as the original Fabergé eggs.

Devoted Fabergé collectors and scholars have focused their attention on the seven missing imperial Easter eggs. In 2012, the 43rd egg resurfaced from obscurity. The Third Imperial Egg (1887), was found at the home of an American—he had bought it at a flea market. At the time, it was estimated to be worth around $33 million. In 2007, one of the Rothschild eggs—which were made in 1902 for the famous American banking family—sold for an eye-watering £8.9 million at a Christie’s auction. Although not an imperial egg in itself, it was still made according to the same high standards required by the Romanovs. A previous auction record was held by the Fabergé Winter Egg (c.1913), which fetched £6.6 million in 2002. At the time of its creation, the Winter Egg was the most expensive ever made; it cost Nicholas II 24,700 Russian rubles at the time.

Fabergé’s last imperial egg also went under the hammer. Crafted in 1916, it reflected an unstable moment in Russian history and was less opulent and elaborate than previous pieces. The Order of St. George Egg (1916) was given a more ‘modest’ design—though it was still made out of diamonds and enamel—in keeping with the austerity of World War I. In 1960 it was sold at a Sotheby’s auction for over $30,000 to the Fabergé Company. In 2004, as part of the Forbes Collection, it was sold again—with eight other imperial eggs alongside it—to Ukranian businessman Viktor Vekselberg for $100 million. The nine eggs are now housed in the Fabergé Museum in St Petersburg.

For the most part, Fabergé eggs remained economically ‘out of reach’ for the middle class at the height of the company’s fame. However, the jeweller also produced cutlery and other objects aimed at Russian up-and-comers. The brand became so iconic that ‘people started to talk about setting the Fabergé, rather than laying the table,’ said Toby Faber, author of Fabergé’s Eggs: The Extraordinary Story of the Masterpieces that Outlived an Empire. In November 2008, Sotheby’s auctioned various pieces of Fabergé—including a gold and diamond snuff-box, a gold and enamel diptych and a gold cigarette box. The sale realised a total of £1.9 million.

Over a century on, Fabergé eggs continue to enjoy high standings in the estimations of collectors, historians and art connoisseurs alike. In addition to being precious in their make, their fascinating history continues to capture the public’s imagination. Interest in these opulent eggs shows no signs of fading, in part because of their finite number, the mystery surrounding the missing creations, their stellar monetary worth and the sentimental value they held for the Romanovs. A little over 10 years ago, Fabergé started producing exquisite pieces of jewellery reflecting the romantic decadence and lavishness of the brand. These pendants—which sport the unmistakable egg charm—are a modern symbol of the jewellery firm’s reputation, which is deeply rooted in history. •