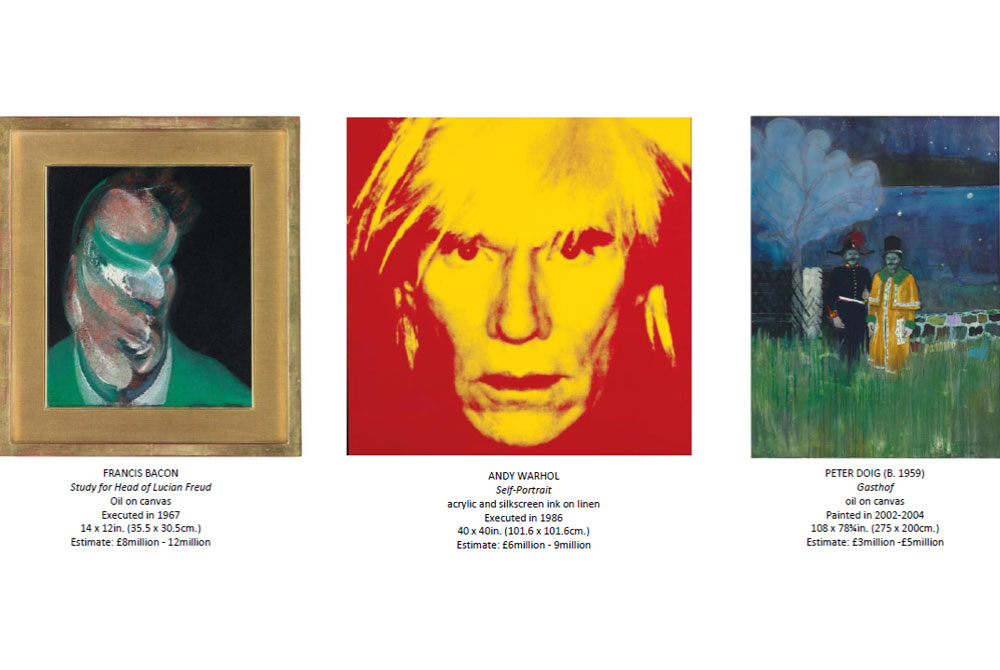 The sale represents many of the most important artists and movements of the 20th and 21st centuries, including works by Andy Warhol, Francis Bacon, Tracey Emin and Peter Doig that challenged the notion of the traditional portrait and changed the face of contemporary art practice.
Highlights also include major works from the Blum Collection and the Langen Collection, two exceptional European private collections built up over the past half century.

Francis Outred, Christie’s Head of Post-War & Contemporary Art, Europe, says: “Following the record success of the Christie’s Post-War & Contemporary Art Auctions in London in February – which was a record for Europe – and in New York in May, we are delighted to present a distinct set of works that form a mini-survey of the portrait from the second half of the twentieth century to today.
Highlights include Francis Bacon’s luminous portrait head of Lucian Freud from the collection of the writer Roald Dahl; Andy Warhol’s haunting late great self-portrait;  and the iconic My Bed by Tracey Emin, an artist who has turned her entire career into a self- portrait.

It is also a privilege to present two legendary European private collections – the Collection of Rudolf and Leonore Blum from Switzerland, and the Collection of Viktor and Marianne Langen from Germany. Both collections bring a strong selection of Post-War art into our auction. From the Blum Collection we are sellinga drip painting by Jackson Pollock  – the first major painting by the artist to come to auction in London – and from the Langen Collection we find its reflection in European abstraction of the same period, including works by Burri, Tapies and Dubuffet.”

Building on the success of the record-breaking sale of Francis Bacon’s triptych of Lucian Freud, which sold for $142 million in New York in November 2013, the London Post-War and Contemporary Evening Auction will offer one of only two single portrait heads of Lucian Freud, Study for Head of Lucian Freud, 1967 (estimate: in the region of £8million – 12million).

Bacon uses his rapid, impulsive brush marks to create an intimate and animated portrait that has spent its entire life in the collection of the celebrated writer Roald Dahl and subsequently in the collection of his estate. Where Bacon chose to transform the representation of a person through paint, Tracey Emin chose to present her self-portrait through her installation, My Bed (estimate: £800,000 – 1.2million).
An iconic piece that encapsulates Emin’s work exploring the relationship between her life and her art, My Bed caused a furore when it was shortlisted for the Tate’s Turner Prize in 1999, prompting public debate about the nature of contemporary art.