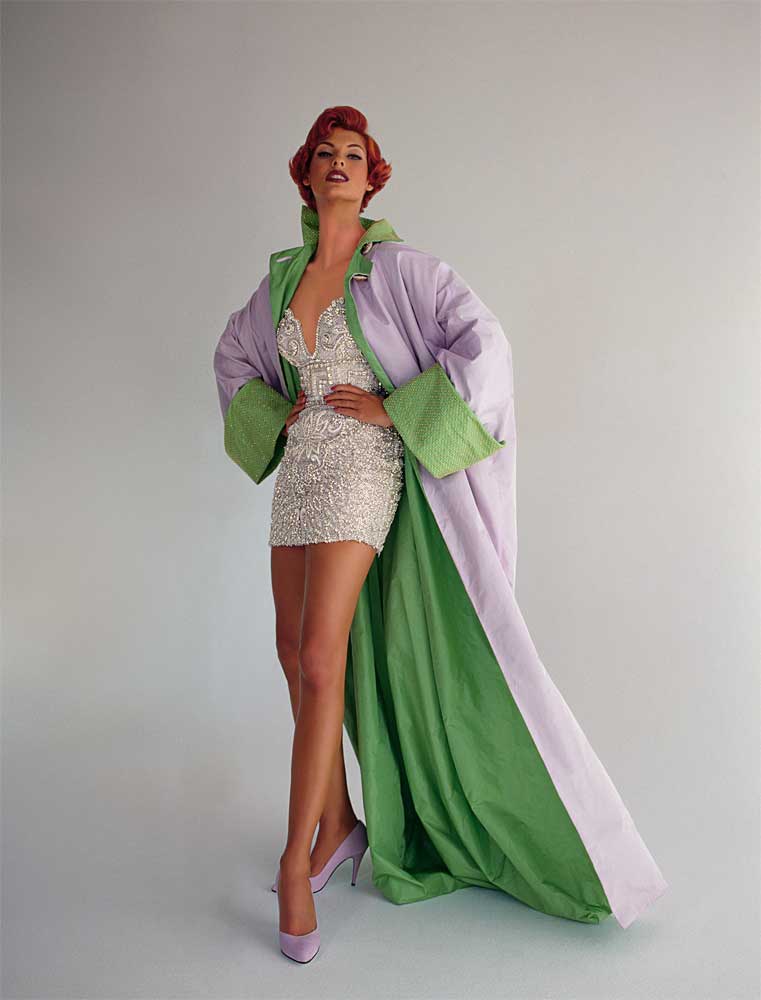 For 100 years British Vogue has led the way with its cutting-edge fashion and beauty coverage, as well as becoming a platform for some of the world’s leading photographers.

Often toted as ‘the fashion bible’, Vogue was launched in 1892 thanks to Arthur Turnure, who funded the weekly publication in the U.S. The aim was to feature fashion and social affairs celebrating ‘the ceremonial side of life’, targeting debutantes and affluent Americans.

The American Vogue was imported and sold in Britain until a British version was published in 1916, which had successful sales despite the First World War. British Vogue (or ‘brogue’, as insiders apparently call it) was the first overseas edition of the magazine, and many other foreign-language editions followed: French Vogue arrived in 1920, Spanish and German editions arrived in 1928, and 18 further editions were released worldwide, including Australia and China.

Initially, British Vogue was identical to American Vogue, only with anglacised spellings. However, British Vogue’s first editor and fashion designer, Elisapeth Champcoummunal, thought it important to streamline the magazine to focus on fashion.

Third editor Alison Settle is often credited with creating the first successful version of British Vogue, thanks to her well-respected journalistic skills, noted fashion sense, aesthetic awareness, and enthusiasm for women’s rights—the luscious, art-deco rich covers produced during her tenure in the 20s and 30s are a testament to her vision.

British Vogue’s current editor-in-chief is Alexandra Shulman, and under her direction, Vogue is one of the best selling magazines in the UK. She is renowned for developing collector’s issues, such as the ‘Gold Millennium issue’, and using famed celebrities and supermodels (Kate Moss, Gigi Hadid, Rihanna) as cover stars.

She is recognised for her use of ‘up-and-coming’ photographers like the (now distinguished) Mario Testino. She has also pushed designers to stop using size-zero models, which she has been praised for. Speaking of the current exhibition at London National Portrait Gallery, Alexandra Shulman says: ‘Vogue 100: A Century of Style is a landmark exhibition in the history of magazine photography.

I am incredibly proud of this collection of exceptional photography and of the whole concept of the exhibition, which shows the breadth and depth of the work commissioned by the magazine as well as Vogue’s involvement in the creation of that work. The National Portrait Gallery is a wonderful place for this show, which mixes portraiture and contemporaneous artistic style in the same way as much of the Gallery’s own collection. Anybody interested in photography, fashion, fame and magazines will find this an unmissable experience.’

The exhibition, which will run at the National Portrait Gallery until 22 May 2016, showcases the significant collection of photography that has been commissioned by British Vogue in its 100-year long reign as the ruling fashion magazine.

See also: WATCHES AND TIMEPIECES: THE LUXURY OF TIME

The exhibition will also include many of the faces that have formed the cultural landscape of the twentieth century, from Henri Matisse to Francis Bacon, Lucian Freud and Damien Hirst; Marlene Dietrich to Gwyneth Paltrow; Lady Diana Cooper to Lady Diana Spencer; and Fred Astaire to David Beckham. Also featured in the exhibition will be the fashion designers that constructed the pioneering looks of the century, including Dior, Yves Saint Laurent and Alexander McQueen.

‘British Vogue has played a pivotal role in the development of photographic portraiture over the past century, commissioning leading photographers and designers to produce some of the most memorable and influential images in the history of fashion.

We are extremely grateful to Alexandra Shulman and her team for giving us unprecedented access to the treasures of the Condé Nast archive and for allowing us to present a panoramic view of this hugely important British institution on a scale that has never been seen before.’

Robin Muir, who is a Contributing Editor to British Vogue, curated the exhibition. He has arranged many exhibitions over the last twenty years, focusing on fashion and portrait photography, including Under the Influence: John Deakin and the Lure of Soho at the Photographers’ Gallery (2014), Unseen Vogue: The Secret History of Fashion Photography at the Design Museum (2002) and Snowdon: A Retrospective at the National Portrait Gallery (2000).

Muir has also curated major exhibitions for the V&A, the Museum of London, and the Yale Center for British Art, New Haven. His books include People in Vogue: A Century of Portraits (2003) and Vogue Model (2010).

Highlights of the exhibition include the entire set of prints from Corinne Day’s scandalous Kate Moss underwear shoot, taken in 1993 at the pinnacle of the ‘grunge’ trend; Peter Lindbergh’s famous 1990 cover shot that defined the supermodel era; a series of exceptional Second World War photographs by Vogue’s official war correspondent, Lee Miller; a rare version of Horst’s famous ‘corset’ photograph from 1939, which inspired the video for Madonna’s hit song Vogue; and vintage prints by the first professional fashion photographer, Baron de Meyer.

The National Portrait Gallery has also recently included never-before-seen photographs of Jude Law and The Beatles. The Beatles portrait has remained unpublished in Vogue’s archives until now and the Jude Law image was published in British Vogue in 1996, but has not since been shown in a gallery or museum.

Albert Watson photographed the then 23-year-old Jude Law, along with other British actors and directors, at a studio in London for the March 1996 edition of British Vogue. The 20-page special, ‘Vogue’s film star salute: celebrating 100 years of British film’, was a homage to British cinema and featured new photographic portraits of prominent 1990s British actors, directors, scriptwriters and producers.

Diana Vreeland at American Vogue commissioned the Beatles portrait by the young British Vogue staff photographer Peter Laurie in 1964. Her British assistant art director, Nicholas Haslam, who was dispatched to Northampton to have them photographed after a concert, suggested the idea to Vreeland. Scheduled for publication in BritishVogue, the moment came and went, and the portrait lay unpublished in the magazine’s archives.

See also: STING AND TRUDIE STYLER’S COLLECTION UP FOR SALE