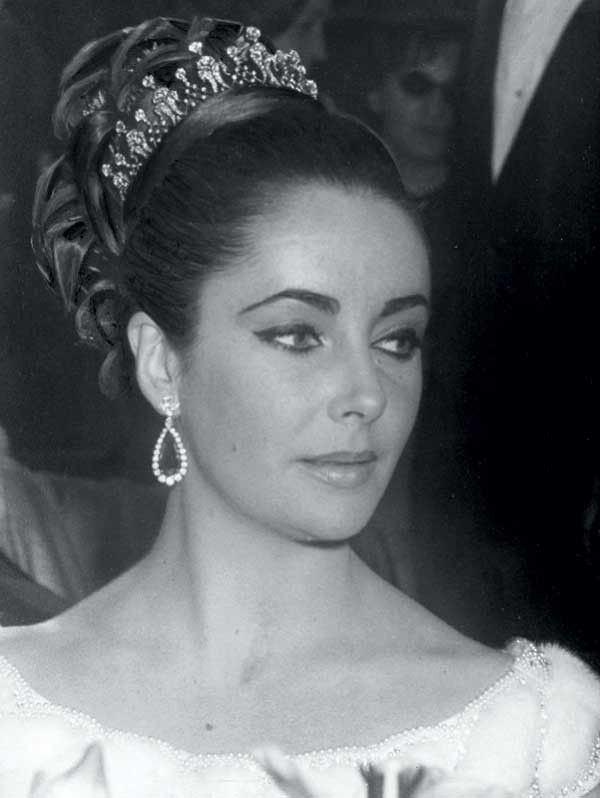 Elizabeth Taylor, described as ‘the last of the true Hollywood icons’, is as well known for her opulent jewellery as for her acting career. We now have the opportunity to admire, and buy, her precious collection.

Elizabeth Taylor’s passion for jewels was apparent from early on. She said: ‘My mother says I didn’t open my eyes for eight days after I was born, but when I did, the first thing I saw was an engagement ring. I was hooked.’

Her style was sumptuous and she was the epitome of Hollywood glamour for many years. The double Oscar winning actress died at age 79 in March this year. Famous for her roles in National Velvet, Cleopatra and The Girl Who Has Everything, she left a legacy of memorable films. But her legacy extends also to the humanitarian with her AIDS foundation and, of course, her famous jewellery collection. It is this collection that’s making the headlines, with the upcoming US$30 million sale
at Christie’s.

Widely celebrated as one of the greatest private collections ever assembled, this dazzling array of jewels includes 269 of Elizabeth Taylor’s most iconic diamonds, gemstones, historic jewels, and one-of-a-kind creations, as well as a treasure trove of personal mementos and gifts.

Marc Porter, Chairman and President of Christie’s Americas says: ‘From her most jaw-dropping diamonds, gems, and one-of-a-kind historic jewels, to cherished “It’s Tuesday, I love you” gifts, and never-before-seen keepsakes, Elizabeth Taylor’s magnificent collection of jewels promises to captivate the auction world this fall. This is without a doubt the greatest private collection of jewellery ever assembled in one place, and Christie’s is honoured to have been entrusted with the global tour of the collection this fall, and the sale of the collection in its entirety
this December.’

Many of the items for sale were gifts from Richard Burton, who Taylor met on the set of film Cleopatra. Their romance was notoriously tumultuous; they married, and divorced, twice. Their story of their affair was captured in the book Furious Love, which is being made into a film with Paramount. One thing about their relationship was certain: Burton showered Taylor with many extremely extravagant gifts.

François Curiel, International Jewelry Director and President of Christie’s Asia, says: ‘It was clear that she possessed an expert’s eye for craftsmanship, rarity, quality and history.  She collected the best pieces from the best periods, and as a result her collection boasts exquisite examples from the most celebrated of jewellery designers, including BVLGARI, Boucheron, Cartier, JAR, Schlumberger, Tiffany, and Van Cleef & Arpels, among others.’

Let’s take a look at this exclusive collection.

This 33.19 carat diamond ring was a gift from Richard Burton in May 16, 1968. It is classed as Type IIa Potentially Internally Flawless and estimated to achieve $2,500,000-3,500,000. The spectacular stone was a constant in Elizabeth Taylor’s life and became the ring she wore virtually every day. She noted, ‘My ring gives me the strangest feeling for beauty. With its sparks of red and white and blue and purple, and on and on, really, it sort of hums with its own beatific life.’

Richard Burton famously purchased a remarkable pearl for Elizabeth Taylor at auction in 1969 for $37,000, after successfully outbidding a member of the Spanish Royal family.

Inspired by a sixteenth-century portrait of Mary Queen of Scots, she later commissioned Cartier to design an exquisite new mount of matched natural pearls and rubies to offset what she called ‘the most perfect pearl in the world’.

The sixteenth-century pearl is 203 grains in size—equivalent to 55 carats—and ranks as one of the most important historic pearls in the world. Discovered in the 1500s in the Gulf of Panama, the pear-shaped pearl became part of the crown jewels of Spain. Prince Philip II of Spain was among the first recorded owners of the pearl and it later passed on to the Spanish queens Margarita and Isabel, who proudly wore the pearl in seventeenth-century portraits painted by Velázquez. It is estimated to sell for $2,000,000-3,000,000.

As noted in her 2002 book My Love Affair With Jewelry, Elizabeth Taylor’s husband at the time, Mike Todd, presented her with this antique diamond tiara, saying, ‘You are my queen.’ She wore it to the Academy Awards in Los Angeles in 1957, where Todd’s film Around the World in 80 Days won for Best Picture. It is estimated to achieve $60,000-80,000.

Inscribed with the name Nur Jahan, the wife of the Mughal Emperor Shah Jahangir, this heart-shaped diamond is believed to have been a gift from the ruler to his son, who became the great emperor Shah Jahan (1592-1666). At the age of 35, it is believed that the young prince presented the diamond to his favourite and most beloved wife, Mumtaz-i-Mahal.

The emperor’s grief at her death just four years later was legendary—in her memory he commissioned the majestic Taj Mahal—one of the seven wonders of the world. Richard Burton was captivated by the history and significance of this special diamond, and gave it to Elizabeth to mark her 40th birthday in 1972 in a Gold and Ruby Chain, by Cartier. It is estimated to achieve $300,000-500,000.

In keeping with Elizabeth Taylor’s life-long devotion to humanitarian causes, Christie’s has announced that a portion of the monies generated by exhibition admissions and events will go to The Elizabeth Taylor AIDS Foundation (ETAF).

The exhibition starts September 15 and will tour Moscow, LA, London, Dubai, Geneva, Paris and Hong Kong before finishing in the Rockefeller Center gallery space for four days of auctions in December. For the full tour schedule, visit www.christies.com/elizabethtaylor.

Memorabilia Collectors Of Pop And Celebrities