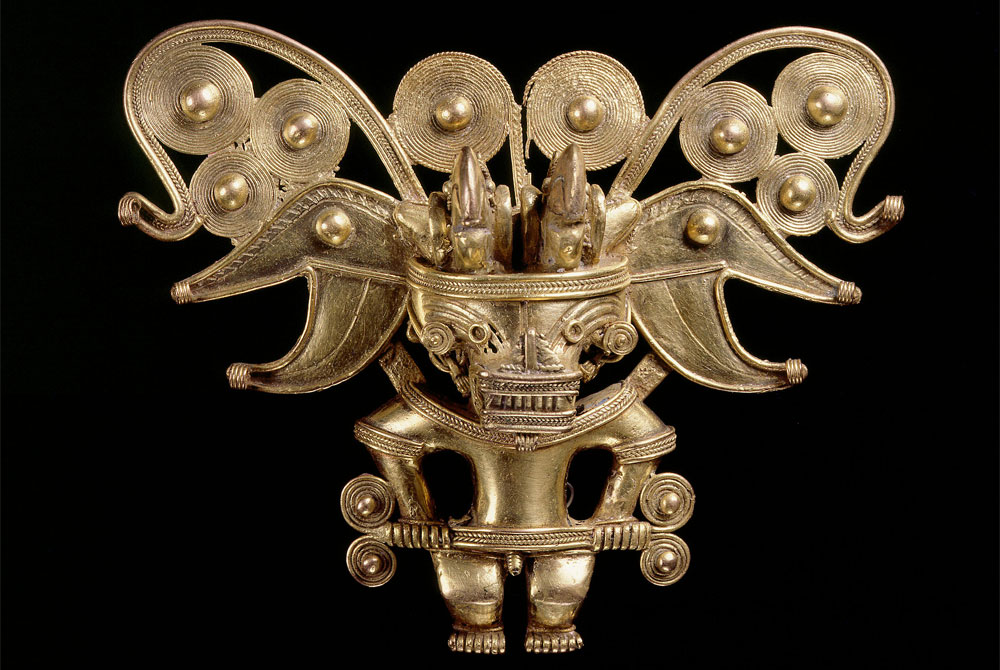 It was a land where gold was so abundant it had no value in modern terms, but its cultural significance went to the heart of an ancient Colombian civilisation. What remains today makes up the world’s most extraordinary collection of exquisite gold artefacts.

It was the legend of El Dorado – “the golden one” and his a city of gold – that beyond the forests of the Amazon, attracted the conquistadors with their lust for gold. The myth went through various transformations and affected many human lives over the centuries. Today we can glimpse the legend through a collection of rare artefacts, currently on show in London, courtesy of the Museo del Oro, Bogotá, that give a fascinating insight into the ancient cultures of South America.

Legend has it El Dorado, translated literally “the golden one”, was a hidden city of unimaginable wealth where the mineral was to be discovered in great amount. Blinded by the vision of an easy fortune, European explorers set off on numerous treasure expeditions, which each time ended in failure and cost many lives. What the conquistadors heard, from captive natives, was that El Dorado was the name of a tribal chief who would be covered in gold dust as part of an initiation ceremony. The myth grew that the city El Dorado ruled was a city of gold.

Recent archaeological research confirms that the myth indeed refers to an authentic ritual practiced by the Muisca tribe. The specific rite was a welcoming ceremony of the Muisca chief. The future ruler was covered in gold dust and placed on a raft alongside his servants who carried baskets filled with gold and emeralds. During the festivities, the chief would dive into Lake Guatavita (near present-day Bogotá) together with the glittering offerings, known as tunjos, to the accompaniment of chants and ritual dances.

By around 500 BC it is evident that the people of ancient Colombia had mastered goldsmithing. They had developed sophisticated techniques and gold-blending processes from which thousands of artefacts were created. However, gold did not represent prosperity and wealth in pre-Hispanic Colombia and was not used as currency.

The precious metal was valued in purely spiritual and aesthetic terms, mainly as a material to produce votive offerings to the gods. Gold was also associated with the energy and creative powers of the sun. Chiefs and spiritual leaders were said to communicate with both supernatural and animal spirits, and these had the power to maintain the balance and welfare of the community and protect the people from evil. This gave only the initiated tribal chiefs the right to wear the golden ornaments and masks that represented their rank and social status.

Interestingly, these wonderful objects were not only made of gold or an alloy of gold and copper, known as tumbaga; ornaments were also crafted from wood, shells, birds’ feathers, animal skins, ceramics, and even stones and textiles. In addition, these tribal dignitaries used permanent body decorations such as lip plugs, ear and nose pendants.

They also used small sticks, brushes and ceramic rollers or stamps with embossed patterns, with which to decorate their bodies. Using potent drugs, these spiritual leaders believed they could transform themselves into animals. By imitating various creatures this would protect them from predators, such as jaguars and crocodiles. These drug-induced transformations would guarantee the wildlife’s goodwill.

The El Dorado exhibition currently in London takes us beyond the myth and illustrates the complexity of gold craftsmanship and the role gold production played in lives and rituals of the pre-Hispanic societies in Colombia. The exhibition focuses on six most characteristic regions—Zenú, Tolima, Muisca, Quimbaya, Calima, Tairona—which best represent the creativity and technical skills of the ancient artists.

The director of the British Museum, Neil MacGregor, commented: “Ancient Colombia has long represented a great fascination to the outside world and yet there is very little understood about these unique and varied cultures. As part of the Museum series of exhibitions that shine a light on little known and complex ancient societies, this exhibition will give our visitors a glimpse into these fascinating cultures of pre-Hispanic South America and a chance to explore the legend of El Dorado through these stunning objects.”

El Dorado: power and gold in ancient Colombia is organised by the British Museum, in association with Museo del Oro in Bogotá. Open to the public from October 17, 2013 through March 23, 2014, it brings to light many mysteries behind a fascinating combination of myths and truths about famous El Dorado.

Mechanical Watches for a Humanitarian Cause