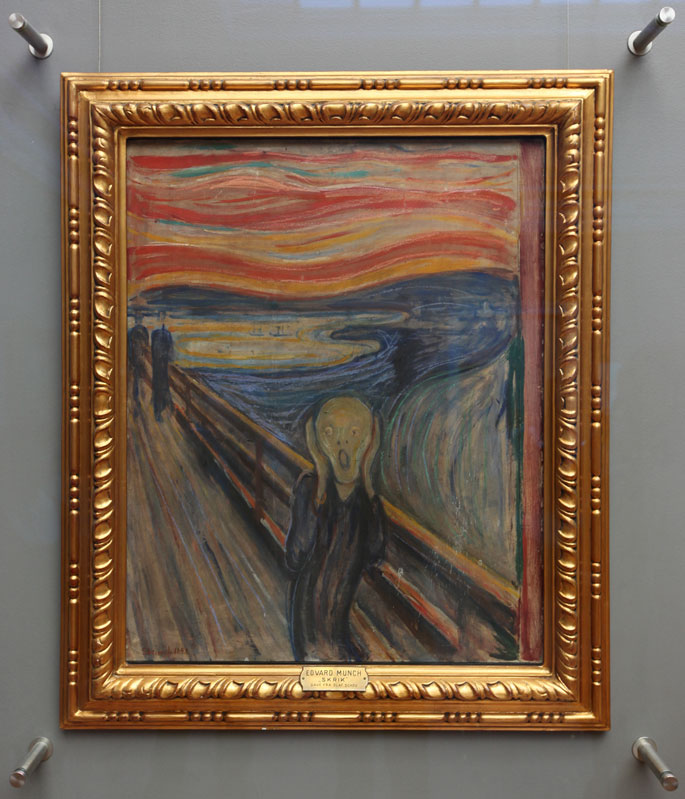 Edvard Munch (1863-1944) was a Norwegian painter and printmaker. He is widely admired for his most famous artwork, The Scream (c.1893), although avid art enthusiasts know him to be one of the most prolific and influential figures of modern art.

Born the son of a priest, Munch grew up in Ådalsbruk in Løten, Norway. Not long after his birth, Munch’s mother died from tuberculosis, leaving his father to raise him and his siblings. Munch’s father suffered from mental health issues which would affect the way he brought up his children. This experience hugely influenced Munch’s work, explaining the dark tones employed in many of his art pieces. The heartbreaking prose of Munch’s life continued when his younger sister was institutionalised—she eventually died later into his career.

This tragic mix of circumstantial events were explained by his Christian fundamentalist father as acts of divine punishment. This troubled Munch heavily as an artist, and in turn influenced his choice to focus on topics of human vulnerability and emotional suffering.

He began his career as a protégé for artist Christian Krohg—an avid advocate for Naturalistic styles. However, Munch’s tendencies moved away from that of his teacher’s; he began applying his own emotionally driven, expressive style to his work. During this time, Munch experimented with concepts of Impressionism and other styles. He was heavily criticised by his peers early on in his profession; they did not understand his methods or his use of ‘random blobs of colour’. After more experimentation, Munch came to the conclusion that the Impressionist style did not satisfy his needs as an artist. He found it too akin to scientific experimentation; he felt the need to explore matters of energetic and emotional content.

Throughout his life, Munch was known to binge drink and had suffered from depression. Upon the instruction of a close friend, Munch began to self-reflect, capturing his thoughts and feelings through his art. The Sick Child (1886)—inspired by his young sister’s death—was one such example, which Munch described as his first ‘soul painting’. It also proved to be his initial break away from Impressionism.

As Munch became more self-assured in his abilities, his brushwork became bolder. He concentrated on psychological themes and matters of human mortality such as chronic illness, sexual liberation and religious aspiration. Munch expressed his ideals through works with intense colour palettes and mysterious subject matter. As Munch’s style matured, many of his works were described as being part of the Symbolist movement—instead of purely depicting the subject itself, his paintings extended beyond, representing a broader, emotional story.

The Scream remains Munch’s most famous and celebrated work and it exists in four versions: two pastels (1893 and 1895) and two paintings (1893 and 1910). Both paintings were separately stolen: one from Oslo’s National Gallery in 1994 and the other from the Munch Museum in 2004. Both were recovered with little damage. He also made several lithographs of the piece. The colours within The Scream are vibrant, bold and stirring. Red streaks across the sky give the piece an overall feel of fear and anguish. We are presented with a high viewpoint, looking down upon a screaming figure whose facial appearance almost resembles that of a skull. Munch described his motivations for The Scream: ‘I was walking down the road with two friends when the sun set; suddenly, the sky turned as red as blood. I stopped and leaned against the fence, feeling unspeakably tired. Tongues of fire and blood stretched over the bluish black fjord. My friends went on walking, while I lagged behind, shivering with fear. Then I heard the enormous, infinite scream of nature.’

Munch had an effect on subsequent painters in Europe and across the pond in the United States. German expressionist painters—such as Kirchner, Kandinsky and Beckmann—are said to have taken considerable inspiration from Munch’s ability to express psychological concepts through intense colour and semi-abstraction.

Upon his death in 1944, Munch bequeathed all of his works—finished and unfinished—to the city of Oslo. 1,100 paintings, 4,500 drawings and 18,000 prints were recovered; they make up the collection of a museum made especially for the artist. Some also contribute national museums across the globe, eternalising his emotional messages.

If you have enjoyed this article: ‘Edvard Munch: Human Vulnerability and Emotional Suffering’, click here to read more on Arts & Collections about Georgia O’Keeffe.