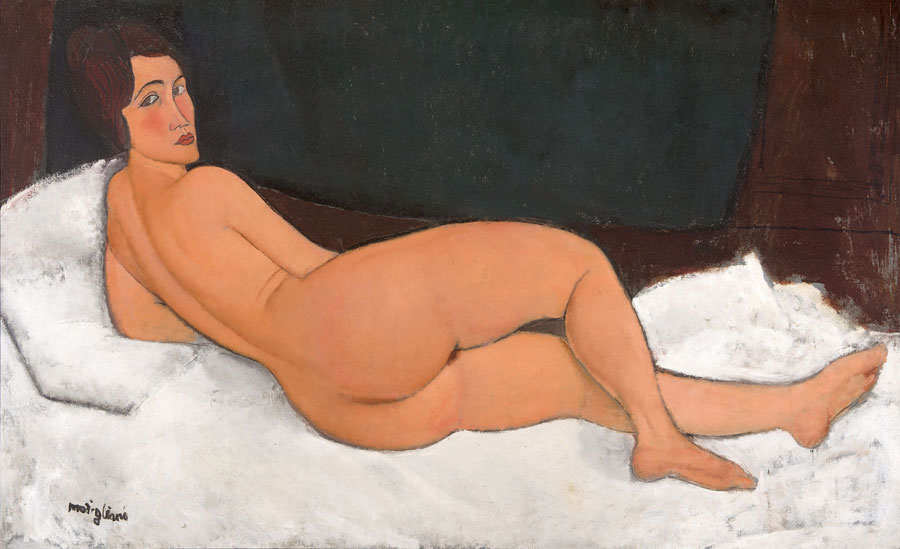 Tate Modern’s new Modigliani exhibition will highlight the work of one of the most famously tormented artists of the 20th century, a visionary who transcended the boundaries of art at the time.

Credited with modernising two of the most common themes in art history—the portrait and the nude—Amedeo Modigliani is, to this day, still one of the most famous avant-garde artists of the 20th century. Tormented by ill health for the majority of his life, the Italian painter and sculptor is among the many visionaries that found little fame during their lifetime. Modigliani was born in Livorno, a city in the western coast of Tuscany. He was interested in art and poetry since a very young age, a passion that his family supported as much as their modest lifestyle allowed. While suffering from typhoid fever at the age of 14, he told his mother he wanted to become a painter. A year later he gave up schooling to study drawing with Guglielmo Micheli and soon left for Florence to focus on the art of figure drawing at the Scuola Libera di Nudo.

It wasn’t until he moved to Paris in 1906 that Modigliani began experimenting with the modern portraits and nudes characterised by elongation of features that he is famously known for today. While in the French capital, he came into contact with artists such as Pablo Picasso and Constantin Brâncusi—two figures that had a deep impact on his work. Although his oeuvre includes paintings and drawings, Modigliani also devoted himself to sculpting from 1909 to 1914. While his personal artistic style was not closely associated with any particular movement or ‘ism’ of the 20th century, his work did take on some elements of Cubism, juxtaposing them with hints of non-Western and African art. Perhaps one of the most interesting and tormented artists of the 20th century, Modigliani’s works were not well received during his time. They did, as is often the case, achieve greater popularity after his untimely death and sold for high prices at various art auctions and events thereafter. Modigliani passed away in Paris in 1920 aged 35 after a short battle with tubercular meningitis.

From 23 November until 2 April, Tate Modern in London will stage the most comprehensive Modigliani exhibition ever held in the U.K. The show will bring together a stunning variety of the artist’s best works, including his famous nude paintings, portraits and sculptures. Taking a look at the experimentation that shaped his career, the retrospective will include 100 rarely-exhibited paintings, almost 40 of which have never been seen before in the country. It will also bring together the largest ever group of nudes shown and reunited in the U.K., including Nude (1917) and Reclining Nude (c.1919). These explicit depictions, which led to the police censoring his only solo exhibition in his lifetime at Berthe Weill’s gallery in 1917, are debatably the artist’s most recognisable works.

The exhibition will begin with Modigliani’s arrival in Paris, a period of time during which he experimented with different elements of pop culture and drew inspiration from the art of Cézanne, Toulouse-Lautrec and Picasso. Early canvases, such as Bust of a Young Woman (1908) and The Beggar of Livorno (1909) demonstrate the artist on his way to developing his own distinctive visual language. The display will also consider the role of women in Modigliani’s work, including famed editor and writer Beatrice Hastings—a pivotal figure in the cultural landscape of the time. It will continue with various representations of people—such as Young Woman of the People (1918) and Boy with a Blue Jacket (1919)—which he painted while he was in the south of France during a moment of particularly poor health. Concluding with some depictions of Modigliani’s nearest and dearest, the exhibition will bring visitors full circle through to the turbulent end of the artist’s life.

Other highlights of the retrospective comprise of Modigliani’s sculptures, including a substantial group of his Heads made before the First World War. Visitors will discover lesser known but radical and thought-provoking works of art as well as representations of some of his closest influencers; namely Picasso, Brâncusi and his partner Jeanne Hébuterne with whom he had a child. The exhibition, which was made possible with the help of Bank of America Merrill Lynch, also boasts a pioneering collaboration with HTC Vive, bringing art and technology together to create a stunning experience. This exhibit will allow art lovers visiting the Tate Modern to be transported to the heart of 20th century Paris using the latest virtual technology.

Modigliani remains a dramatically fascinating artist, his legacy is intertwined with the romanticism of the typical bohemian artist. Countless films and biographies have been produced on the subject of his life, all focusing on the artist who lived a truly passionate, decadent and self-destructive lifestyle.

If you have enoyed reading this article, click here to read more on Arts & Collections about the Louvre Abu Dhabi’s highway art gallery.