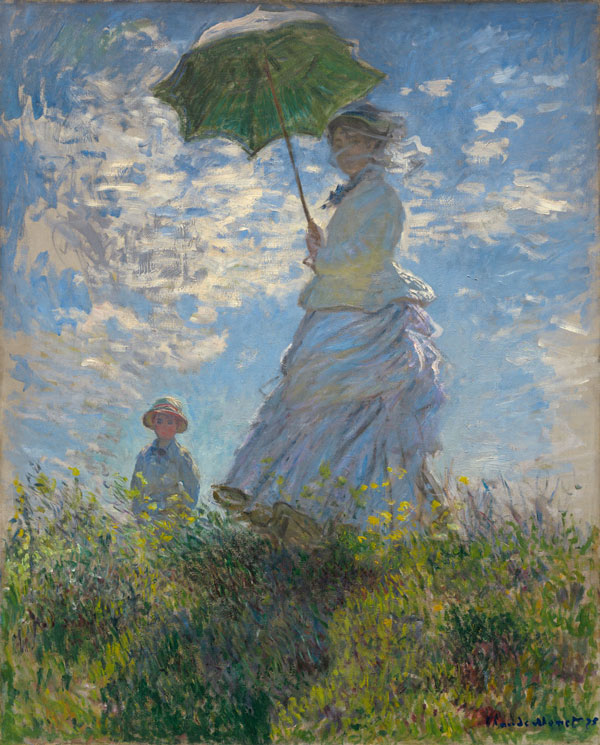 The first inklings of what would become known as Impressionism began in France in the early 1860s with Édouard Manet—the collective’s ‘founding father’. Manet’s work was rejected for display at Paris’ annual art show—the official exhibition supported by the French government—at the Paris Salon in 1863.

His work was deemed to be a radical breakaway from the conservative realist painting style of the time, but the rejection of his painting—along with thousands of others—caused a public outcry and pushed Emperor Napoleon III to initiate the Salon des Refusés. This exhibition was especially curated to display the works of those that had been rejected at the Paris Salon. Manet, a little-known artist who hadn’t yet sold many of his paintings, would become a major source of influence for young artists such as Claude Monet, Edgar Degas and Camille Pissarro.

In 1870, Monet and Pissarro fled to London to escape the Franco-Prussian war. It was in London that these young painters met affluent art dealer, Paul Durand-Ruel who would turn the likes of Manet, Monet, Degas and Pissarro from artistic rejects into celebrities of the art world.

Durand-Ruel took quite a shine to these men—despite negative reviews and harsh opposition stacking up against them. In his memoirs, he mused: ‘All my efforts were thwarted by the violent campaign mounted against Manet, Monet, Renoir, Sisley, Degas and Puvis de Chavannes.’ He added that he and his clients were ‘attacked and reviled by upholders of the academy and old doctrines, by the most established art critics, by the entire press and by most of my colleagues’.

Upon their return to France after the war, the painters formed the Anonymous Society of Painters, Sculptors and Printmakers. The society hosted an independent exhibition in Paris in 1874 to display their paintings, and it was here that art critic Louis Leroy—who had happened upon Monet’s Impression, Sunrise (1872)—famously coined the term ‘impressionist’.

In a review titled ‘The Exhibition of the Impressionists’ in French magazine Le Charivari, Leroy wrote, ‘Impression—I was certain of it. I was just telling myself that, since I was impressed, there had to be some impression to it…and what freedom, what ease of workmanship! Wallpaper in its embryonic state is more finished than that seascape.’

The term Impressionism refers to the capturing of the sensory effect of a scene. Those who had adopted this new style had moved away from Realism and the fine, intricate brushstrokes that depicted history and Biblical scenes. They instead moved towards painting moments with short, quick and deliberate brushstrokes and unblended bold colours which sought to capture the fleeting effects of light upon subjects.

Inspiration for these works came from nature, everyday rural life and illustrations of the middle and lower classes who were once considered unfit for serious paintings. Radical for his time, Manet was one of the first artists of his era to depict men and women together in an equal setting—he often made women the subject of prominence within his paintings.

This is particularly evident in Manet’s famous Music in the Tuileries Gardens (1862). While the vast majority of the subjects in the scene are men—wearing mostly dark attire—the subjects who draw attention to the eye are the two fashionably dressed women in pale yellow gowns, wearing bright blue bonnets.

Scientific discoveries and new inventions during the 19th century had a profound impact on the development of Impressionism. The impressionists had learned that what the mind understands and what the eye perceives—a culmination of light and colour and not clear and defined images—are separate experiences. The introduction of the camera helped the likes of Monet study movements and alternative perspectives by capturing off-focus and blurred photographs.

In 1840, brightly coloured synthetic paint in portable tubes replaced powdered paint and revolutionised the way impressionist artists worked. Artists found that painting outside meant that they could render the quality and momentary nature of light and produce non-distinguished portrayals of shadow, form and movement en plein air (in open air). Many of Monet’s paintings—including Woman with a Parasol (1875) and The Water Lily Pond (1899)—were produced under the employment of this technique.

In contrast, Pissarro’s enthusiastic paintings would depict the renovated city of Paris. Baron Haussmann, the emperor’s prefect, had rebuilt the city to be safer, cleaner and more metropolitan between 1853 and 1870. Wide boulevards, grand buildings, railways and public gardens were an abundant source of inspiration for Pissarro, as seen in his world-renowned painting The Avenue, Sydenham (1871).

Although Degas is recognized as an important figure in Impressionism, his paintings focus mainly on the human body and—in particular—the female form. His works, like Dancers at Rest (1884-1885), tend to be voyeuristic in nature and photographic in capture; often cropped unconventionally with subjects not entirely in the frame.

The impressionist movement was an important one. Radically changing not just the conservative style of painting at the time, Impressionism also brought to the forefront the lives of the lower classes. This style would go on to propagate the Avant-garde movement.

If you enjoyed reading this article on Impressionism, click here to read more on Arts & Collections about the history of mosaics in art.