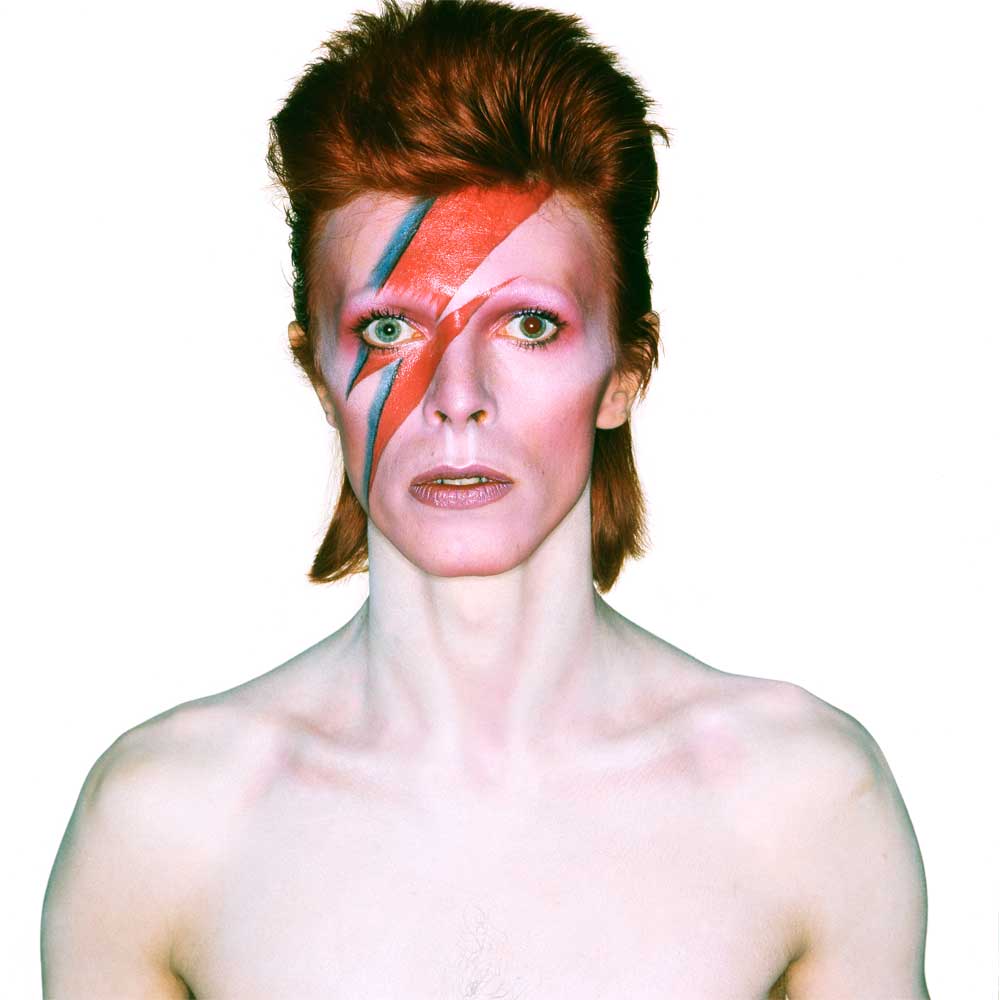 On January 10 2016, the world woke to news that David Bowie, one of the most influential musicians of his era, died peacefully following a courageous, and private, battle with cancer. The world mourned the loss of the glam-rock icon, with an outpouring of emotional tributes from other celebrities (Lady Gaga at the Grammys, Lourdes at the BRITS) and shrines erected by fans in David Bowie‘s child hood home of Brixton, Southwest London.

Two years before his death, in March 2013, David Bowie shocked the world by releasing The Next Day, his first no. 1 album in the official UK charts since Black Tie White Noise in April 1993. The production of the album was kept in complete secrecy, and Rolling Stone magazine had described the release of the new songs as ‘the best kept secret in rock’. The release of this secret album coincided with the opening of the Victoria & Albert Museum’s most popular exhibition to date, ‘David Bowie is’. More than 42,000 advance tickets were sold when the retrospective first opened in 2013, more than double the advance sales of previous exhibitions at the museum.

The Victoria & Albert Museum was given exclusive access to the David Bowie’s personal archive to curate the first international retrospective of his extraordinary career. The touring exhibition, ‘David Bowie is’, explores the creative process of Bowie as not only a musical visionary but also a cultural icon, tracking his pioneering style and reinvention across five decades. More than 1.3 million people have visited the touring show, which has since visited Toronto, Berlin, Chicago, Melbourne and Paris.

V&A curator Geoffrey Marsh explains that David Bowie offered curators full access to his enormous and impeccably kept archives, but declined to talk to them. The exhibition is, instead, the curators take on his life: ‘He was very generous and, in a curious way, quite self-effacing. I think he was genuinely interested in what someone else might make of it all.’

The exhibition, which is made up of over 300 objects from his 50-year long career includes films, fashion, photography, set designs, music videos, drawings, handwritten song lyrics and his legendary costumes—such as the Ziggy Stardust jumpsuit that David Bowie wore in 1972 when he performed Starman on Top of the Pops. One item missing from the exhibition is a Bakelite Grafton saxophone given to a 13-year old Bowie (who was then known as David Robert Jones) by his father, Haywood Stenton Jones. Marsh explains that Bowie declined the request to lend the saxophone, possibly because it was quite delicate but more so because it meant so much to him: ‘it was very poignant. Apart from that, he lent everything we asked of him.’ The exhibition does include other personal items, including never-before-seen storyboards, handwritten set lists as well as Bowie’s sketches and diary entries, which reveal the progression of his ingenious concepts.

Included in the exhibition is one of the most recognizable album covers, not only of David Bowie’s but also of any musician’s, Aladdin Sane (1973). The cover image features Bowie with a flame-coloured mullet hairstyle and lightening bolt painted across his face, shot by photographer Brian Duffy. The album introduces one of David Bowie’s many flamboyant alter egos, Aladdin Sane (a pun on ‘A Lad Insane’), although technically considered an extension of Bowie’s predecessor alter ego (and the one that propelled him to his international fame), Ziggy Stardust.

Bowie described this kind of ‘schizophrenia’ as wanting to be on stage performing his songs, but ‘not wanting to be on those buses with all those strange people’ [in reference to his time spent in America]. The schizophrenia is conveyed by the makeup; the lightning bolt represents the dichotomy of the mind, and the teardrop placed by photographer Brian Duffy. Bowie told Rolling Stone that the lightening bolt was, ‘an electric kind of thing. Instead of, like, the flame of a lamp, I thought he would probably be cracked by lightning. Sort of an obvious-type thing, as he was sort of an electric boy. But the teardrop was Brian Duffy’s, he put that on afterward, just popped it in there. I thought it was rather sweet.’

See also: Sting and Trudie Styler’s Collection Up for Sale

The image has been emulated many times since: the covers of both British Vogue in 2003 and Vogue Paris in 2012 had Kate Moss as the cover model with the iconic red and blue lightening bolt across her face, and her hair styled in a mullet.

Lady Gaga also channeled the look in her debut video for Just Dance in 2008, which sees her wearing a blue lightening-bolt sticker beneath her eye. The singer has since had a tattoo of the Aladdin Sane image on her ribs, as a tribute to the man who she claims changed her life, ‘when I fell in love with Bowie, when I was living on the Lower East Side, I always felt that his glamour was something he was using to express a message to people that was very healing for their souls’, she said in an interview with The Hollywood Reporter, conducted shortly before Bowie’s passing. Following his death, the singer performed a tribute at the 2016 Grammys in Los Angeles. The tribute, which opened to an image of Gaga dressed as Aladdin Sane, consisted of a multi-song medley of Bowie’s best known songs: Space Oddity, Changes, Ziggy Stardust, Suffragette City, Rebel Rebel, Fashion, Fame, Let’s Dance, and concluded with Heroes which earned her a standing ovation.

Bowie’s work has both influenced and been influenced by broader movements in art, design, theatre and contemporary culture, and the colossal popularity of the exhibition both before and after his death shows Bowie’s impact, his innovative style and reinvention cements him as an icon to all generations. As Marsh explains, ‘there are very few performers who engender that kind of love. There are lots of bands that people really like and admire, but the intimacy people feel with Bowie is something very, very rare. And the fact he kept doing it for 50 years is extraordinary.’