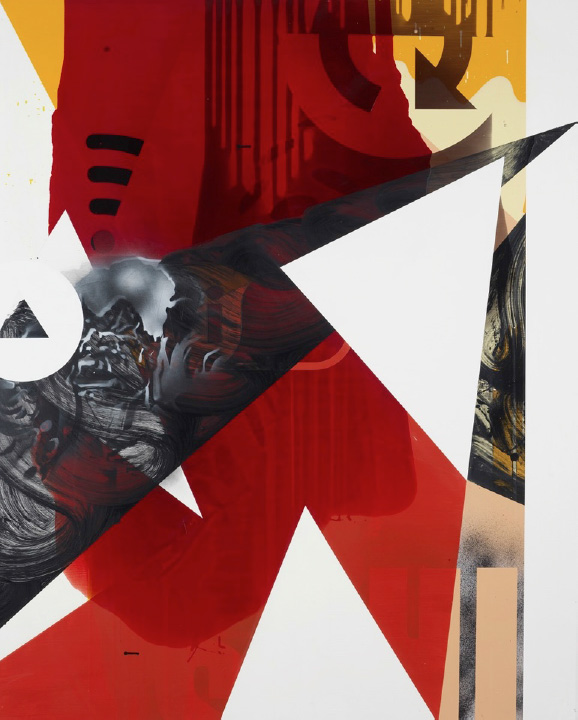 Paul Morrison, Barry Reigate, Michael Stubbs and Mark Titchner aim to evoke through their oeuvre the rich tradition of painting in Britain and beyond. Aiming to demonstrate the medium of painting is alive and well in the 21st century, their show takes its title from the concept of superimposition.

‘These four artists operate at the interface of popular culture and aesthetics,’ say Superimposition’s curators, Catherine Loewe and Michael Stubbs. ‘Through distinct, highly individual processes, each one employs a free-style play of forms and idioms, extracted from the cultural zeitgeist of the early years of the 21st century. Yet their work is also underpinned by an awareness of, and deep affection for, the rich repository of British art from the previous century.’

Derived from the Latin word superimponere, meaning ‘to place over’ or ‘to place above’, ‘superimposition’ is mostly associated with the world of graphics—when one image is layered on top of another to partially or totally cover the previous one, sometimes using different materials. Superimposition is a process-based intervention; one layered or mapped act follows the previous one to reveal the final composition.

The British canon of contemporary art has a long-standing penchant for superimposition, with its roots in the pop art collages of Richard Hamilton and his contemporaries, 1940s merz assemblage by Kurt Schwitters and Ben Nicholson’s abstract paintings.

Each of the exhibition’s four artists is finding new ways to experiment with the concept of superimposition using the medium of paint.

Michael Stubbs is perhaps closest in outcome to the pop artists and abstractionists of the 20th century, piling up riotous fragments and configurations of over-layered colour, while simultaneously introducing graphic logos. His preference for household paints and coloured floor varnishes gives his work a bold and striking aesthetic. As a result, his work takes on an angular quality that is jarring and satisfying in equal measure. Overall, the Rustington-born artist’s work is both accessible and mesmerising.

Turner Prize nominee Mark Titchner has interpreted the superimposition motif verbally. He writes words, phrases and ideas onto his works—duly transforming not just their appearance but also their semiotic function as purveyors of meaning. Titchner’s large-scale public projects superimpose his texts onto the streets—and into people’s lives. He takes his words from song lyrics, corporate mission statements and maxims of revolutionary communism. The viewer tacitly understands he or she is being asked to respond to them, but how and why is never clear.

Barry Reigate’s approach is to apply acrylic paint to canvas with an airbrush. His work combines street art aesthetics, merging cartoon characters with disembodied limbs and passages of purist abstraction. Its many elements don’t simply compete for our attention but seem to fight with each other in a race ‘upwards’ to occupy the picture surface.

Enjoyed reading about this exhibition? Click here to find out more about the V&A’s Frida Kahlo show.