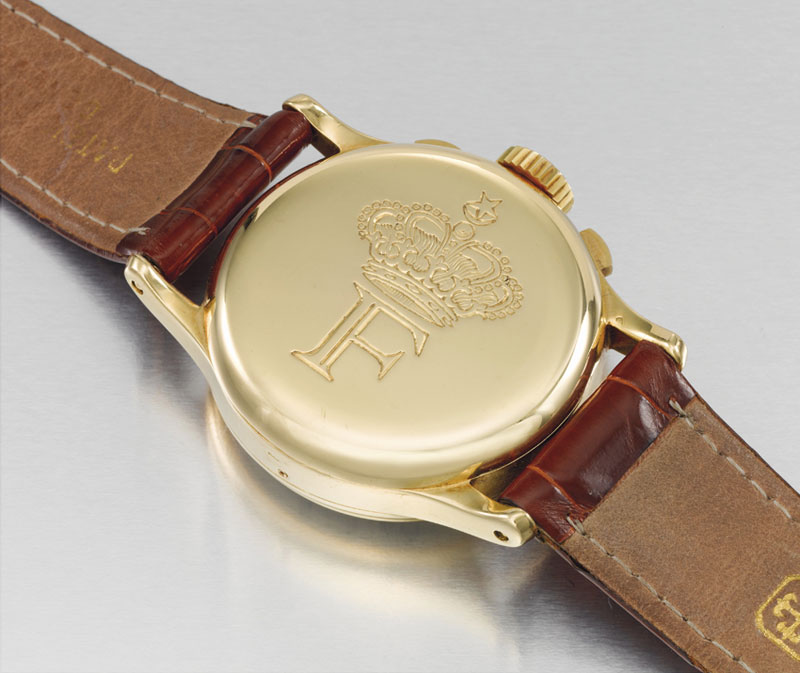 Every year, Christie’s gathers horology experts and connoisseurs from far and wide to marvel at the stunning collectables at their watch auction in Dubai. It has been confirmed that Christie’s will auction King Farouk’s watch as part of the ostentatious event: the Patek Philippe Reference 1518 wristwatch.

The British auction house will offer the personalised timepiece, formerly owned by King Farouk of Egypt and Sudan—who was also the great grandson of Muhammed Ali of Egypt—in their upcoming auction. The ruler’s reign spanned 16 years and was eventually ended after he was overthrown during the Egyptian Revolution of 1952. The pre-sale estimate for King Farouk’s watch is currently in the region of $400-800,000. Being sold alongside King Farouk’s watch is the Patek Philippe extract from the archives, which confirms the production details of the watch and its subsequent sale in 1945.

Known as an avid collector of luxury timepieces, King Farouk had a particular attachment to this item—he had it specifically crafted to fit his design criteria. Farouk’s passion for horology was inherited from his father, King Fuad, who owned an impressive collection of some of the world’s finest watches. The Patek Philippe Reference 1518 watch was commissioned in 1941 and was one of only 281 watches of its kind to be created—making it all the more covetable for collectors. The watch is a bespoke model made especially for King Farouk. An intricate engraving lies on its case; emblazoned on the metalwork is the royal crown of Egypt with its crescent moon and star, alongside the letter ‘F’. The Reference 1518 model was the first perpetual calendar chronograph wristwatch to be produced in a series by any watchmaker.

‘King Farouk’s Patek Phillipe Reference 1518 is a crowning element of Christie’s Dubai watch sale next month—it is a storied piece with provenance from the Middle Eastern region and is already attracting tremendous interest from the region and beyond,’ commented Remy Julia, head of watches for Christie’s Middle East, India and Africa.

Christie’s has reported an influx of interest in vintage watches in the Middle East over the last few years. This has been demonstrated by a 26 percent increase in their global sales to £5.1 billion in 2017, with overall sales from Europe and the Middle East totalling a whopping £1.5 billion—up by 16 percent.

Christie’s will auction their timeless wonders from 23 March 2018, although 180 of the items will be available for public viewing from 19 March 2018.