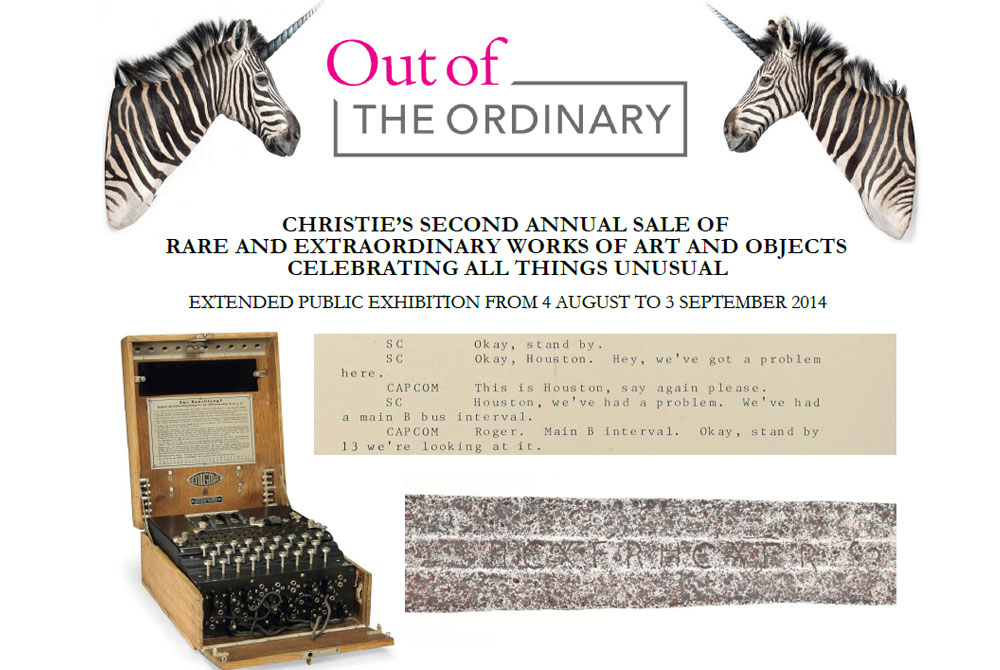 South Kensington, London – Following the success of the Out of the Ordinary 2013 sale Christie’s is happy to announce full details of the second annual sale which will be held on 3 September 2014 and will once again feature an eclectic selection of fascinating items celebrating the joy of the unconventional. The Out of the Ordinary sale will be on extended public view for five weeks from 4 August until the auction on 3 September. The exhibition displaying the intriguing items will offer inspiration to those with a broad range of interests and will appeal to new and established collectors.

Out of the Ordinary will comprise over 180 lots with estimates ranging from £500 to £120,000 providing opportunities for collectors with a wide array of budgets. A portion of this sale will be offered exclusively online giving collectors of the rare and curious the chance to participate from anywhere in the world at any time. Bidding will begin on 27 August and run until 10 September 2014.

Leading the Out of the Ordinary sale is an extremely rare LATE MEDIEVAL BROADSWORD with earlier Viking blade and bearing the arms of the De Bohun family (estimate: £80,000 – 120,000, illustrated left). The sword‟s illustrious story begins in the 11th century where it was possibly captured at the Battle of Hastings by Humphrey De Bohun and later remounted to become a family sword.

Several generations later Sir Humphrey de Bohun, 4th Earl of Hereford and Essex, fought in the Battle of Bannockburn where he witnessed his young nephew Henry de Bohun fall victim to King Robert‟s axe, and joined the retreat after it became clear on the second day of fighting that victory belonged to the Scots. He was taken prisoner at Bothwell Castle and eventually ransomed for the safe return of King Robert‟s queen, Elizabeth, his daughter Marjorie Bruce, two bishops and other prominent Scots captives.

This sword, whilst not being a war sword in its present form, would have been used as a clear badge of identity with its gold and enamelled coat of arms on the pommel and eminently more practical as a side arm around camp when not mounted and armed for battle and appears to be the first of four swords mentioned in Sir Humphrey‟s will of 1319.

Unusual pieces of POP MEMORABILIA in the sale include the front door from the childhood home of Sir Paul McCartney 20 Forthlin Road, Allerton, Liverpool (estimate: £6,000 – 8,000, illustrated right). The McCartney family moved to Forthlin Road in April 1956, leaving behind another terraced council house in Speke, South Liverpool.

Developing a friendship over their shared passion for rock and skiffle, Paul and his school friend George Harrison began to play music together at 20 Forthlin Road – Paul on his trumpet and George on guitar. After meeting John Lennon at the Woolton Parish Church Garden Fete on 6th July 1957, Paul joined John’s band The Quarrymen, purchased his first guitar, invited George to join the group, and 20 Forthlin Road became one of the main places the band would rehearse, and where Paul and John would compose and try out new songs. Over 100 songs are believed to have been written at this house, including Love Me Do, I Saw Her Standing There and When I’m Sixty-Four.

OUT OF THE ORDINARY—THE ONLINE EDIT

Christie’s is delighted to bring a portion of this sale exclusively online so collectors of the rare and curious can participate from anywhere in the world at any time. Bidding will begin on 27 August and run until 10 September 2014. Highlights of the Online Edit include a group of ten Fornasetti ‘Tema e Variazoni’ porcelain plates (estimate: £1,000 – 1,500, detail illustrated left), an Elephant Bird egg, Madagascar, pre-17th century (estimate: £10,000-15,000) and a David Linley for Dunhill architectural jewellery box, circa 1994 (estimate: £7,000-10,000).