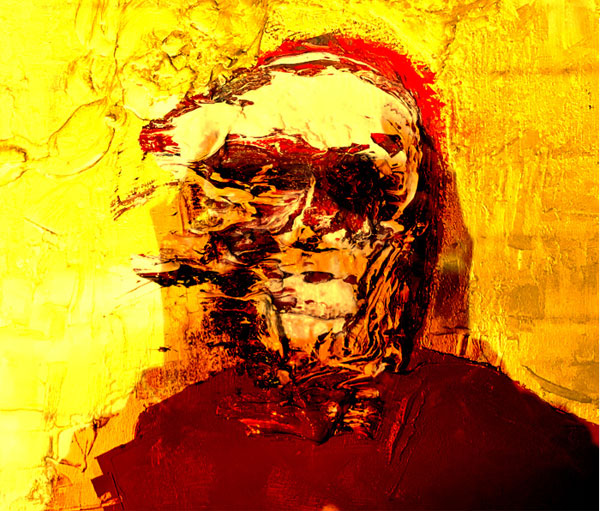 Art world maverick Lincoln Townley today announced his exhibition at La Biennale in Venice at the prestigious Palazzo Bembo on the Grand Canal.

The exhibition, which is the artist’s first outing to the esteemed organization, will take place in May 2019.

Townley, who recently sold one of his major ‘Hell’ works using the cryptocurrency Bitcoin for over half a million pounds, will use the Venice exhibition to unveil his ‘Behind The Mask’ collection, valued at over £5 million.

On the collection, the London-born artist told Arts & Collections: ‘It’s about what we hide, what we don’t want people to see in our personality.’

He added: ‘I’m inspired by the insanity of mankind; I’m intrigued by what people are willing to do to become wealthy, to become famous—that drive is what my work is about.

‘I don’t see humans as very free; I try to look at that energy in the painting. And that’s why it’s called ‘Behind the Mask’, because this is about what’s really going on.

‘I’m a subject of this as well. I want to become extremely famous, as an artist. So I look at my drive—that’s the energy I use.’

Townley explained his Biennale show was an opportunity to control his own destiny, instead of waiting for a gallery to arrange the next show.

The artist, who revealed he often spends days on end in the studio, also raised the issue of how we all hide behind a certain façade online.

‘We’re masquerading on the net, hiding behind false identities, creating the relationship we feel we need to have with somebody—that’s what this is about. And it’s a very evil thing.’

Multi-millionaire Townley’s dramatic rise to fame in the global art market has seen him grow from nothing six years ago to today, where his work sells for in excess of £1 million.

His works on paper will also be on display in Venice, which fetch in excess of £150,000.

Last year, he sold a diamond-encrusted portrait of the late Princess Diana for a personal record-breaking £1 million.

The Princess Diana painting, a huge two-metre square oil and acrylic spray on linen, had over £100,000-worth of diamonds embedded into the canvas to give a spectacular finish.

The self-taught artist has struggled against an established art market and is now collected across the world including America, Australia, the Middle East and Europe.

James Nicholls, managing director and curator of the Maddox Gallery, Mayfair, London, said: ‘In each generation it is a rare occurrence when an artist has the potential to become iconic, and it is our considered opinion that Lincoln Townley is such an extraordinary artist.

‘Sir Michael Caine recently described him as the new Andy Warhol, and others see a Francis Bacon-like quality in his work. The value of his work has risen 200 percent in the last two years alone.’

Townley—who earlier this year was commissioned to create portraits of legendary Brazilian footballers Pele and Ronaldinho to celebrate global peace—has also enjoyed sell out shows at London’s Saatchi Gallery, the Royal Academy and across the world, including Los Angeles and Brisbane.

On his Biennale exhibition, he said: ‘This global show is about me the artist and me the ultimate marketing machine.

‘Sales of my own work and the global following which I have created play an important part in my creativity and they have also given me the confidence to show my work at Venice’s La Biennale.

‘This exhibition will be the peak of my career to date and I’m now seeing all my hard work pay off. I’ve never stopped pushing for what I want and this is what artists need to do. They need to fight, fight, fight for what they want.

‘If I can do it, so can anyone. I’ve gone from nothing six years ago to mixing up the art world up and creating my own position. I’m selling works before I’ve even finished them and this is possible for all artists but they have to look outside the studio and start connecting with buyers themselves.’

The Venice Biennale has been established for over 120 years and is one of the most prestigious cultural institutions in the world.

Established in 1895, the Biennale has an attendance of over 500,000 visitors every year.