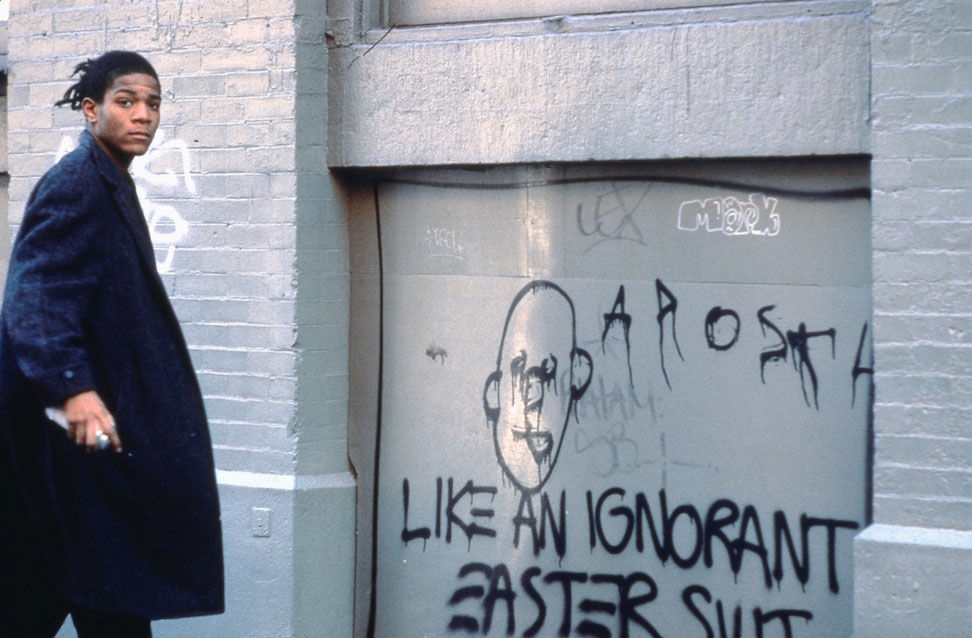 He was a pioneering prodigy who gradually rose from the depths of the New York underground art scene to become one of the most notoriously daring and charismatic artists of his generation. Jean-Michel Basquiat is the focal point of the Barbican Centre’s new exhibition in London—Basquiat: Boom for Real, running from 21 September 2017 until 28 January 2018. The peculiar name, ‘Boom for Real’ was a phrase used by Basquiat when he loved something—fittingly, it has been used to represent this vivid display.

Valuable new research revealing truths behind the artist’s creations will lay the foundations of the retrospective. The exhibition will seek to map out the evolution of Basquiat’s career, whilst shedding light on the dynamism of his practice through drawings, paintings, music, photography and rare video footage.

There has not been an institutional exhibition of his work in the U.K. in over 20 years, despite the artist’s historical popularity and success within the art community. Nor are there any current examples of his work in the country’s public collections. This lack of communal material posed problems for the curators of the exhibit—the majority of the artwork was obtained from private collectors. 100 pieces will be on show; 10 of which resided in public displays abroad and have travelled to London for the occasion.

With the support of Basquiat’s friends and family, newly found evidence has created a richer understanding of who the artist really was. Basquiat’s sisters, Jeanine and Lisane, said they were ‘delighted’ to be working with the Barbican on this important exhibition, labelling the project ‘long overdue’. Visitors are invited into the depths and complexities of his psyche, as they trail the collection of his greatest achievements. ‘You start to understand his world in a much more vivid way than has previously been the case,’ said Eleanor Nairne, curator of the exhibition.

The Brooklyn-born painter is admired for his graffiti-inspired works, which blend intense colours, iconic imagery and poetic captions. Often commenting on the social and economic climate around him, his no-holds-barred style has gained traction with art enthusiasts around the globe. Although Basquiat’s career was cut short by his untimely death from a drug overdose at the age of 27, his distinctive art and poignant messages left a lasting legacy.

A burning fascination with fame and stardom grew in Basquiat from a young age. This began to reflect in his work. He showed great admiration for burnt out stars like Janis Joplin and Jimi Hendrix—who both, ironically, met a similar end through drug abuse.

The renowned self-taught artist first gained media attention in 1978, when he collaborated with his school friend, Al Diaz. The pair gelled over their shared ideologies and artistic flair. Working under the joint pseudonym ‘SAMO’, they graffitied poetic and enigmatic slogans throughout various areas of New York. The SAMO tag became notorious with locals, as did the thought-provoking statements that accompanied it.

After years of struggling financially, Basquiat finally made his big break. The Barbican will reconstruct the artist’s first-ever public exhibition, which was part of a group show at the Manhattan commercial gallery PS1 in 1981. Using an old photo of the original display, curators have managed to reunite 15 works for the first time in 35 years. This reassembly will almost create a portal into the past, allowing attendees to feel as though they are a part of Basquiat’s debut.

A brilliant name in the art world

In the mid 80s, Basquiat began to make a name for himself within the art world, gaining further admiration from his peers. His success coincided with the rise of a new artistic movement, Neo-expressionism, for which he was a pioneer. It was developed as a reaction to conceptual painters; the style depicts objects or human entities in a violently emotional manner. This movement propelled other young and audacious artists—such as Julian Schnabel and Susan Rothenberg—into the spotlight.

Basquiat began to socialise with more influential figures and was eventually introduced to pop artist Andy Warhol. The pair clicked immediately and began a friendship that blossomed over the years. Both artists shared a passion for unearthing stigmas within society; their relationship prompted discussions on topics of social status and white patronisation of black art.

Warhol became a confidant to Basquiat; the pair spent their time painting each other’s portraits, visiting exhibitions together and sharing their views on topical issues. An obsession with stardom was also a commonality between the two—this connection will be explained in detail within Boom for Real.

While Basquiat was influential during his era, there were those who opposed his style. Art critic Robert Hughes once remarked: ‘The only thing the market liked better than a hot young artist was a dead hot young artist, and it got one in Jean-Michel Basquiat.’ The creators of Boom for Real seek to disparage this negative review by highlighting the intelligent concepts that posed as the building blocks of Basquiat’s projects.

Although Basquiat is occasionally labelled as a street artist, Nairne disagrees: ‘He would work in a graffiti vein but he wasn’t a street artist.’ She points out that while he used spray paint and other street art techniques in his work, this is not his defining characteristic.

Being a regular museum-goer, Basquiat drew his inspiration from various sources such as the human anatomy, ‘trashy’ television, surrealist films, bebop jazz and 19th century impressionism. During his career, he adopted various technical approaches, mixing oil paints with collage and scraps of material for a complex aesthetic.

His primitive style was unique and is said to have influenced various other artists such as Massive Attack’s Robert Del Naja. In an interview, the artist (rumoured to be the lucrative contemporary street artist Banksy) stated: ‘He changed my way of painting and thinking about art and I’d like to believe that his style and vision inspired the reactionary urban art movement of this generation.’

The Barbican’s new exhibition—Boom for real—comes at a time when Basquiat’s vestige has been revived. Earlier this year Sotheby’s held one of their most nail-biting auctions to date, where Basquiat’s illustrious Untitled (1982) was sold for a record breaking $110.5 million in New York. The painting of a skull includes all of Basquiat’s signature features: scrawled lettering, frenetic brush strokes and vibrant spray paint. The canvas feels visceral and emotive, whilst being highly textured.

Accompanying the exhibit, the Barbican Cinema will be running The Grime and the Glamour: NYC 1976-90—a lineup of films that capture New York during that time. A notable film from the roster is Susan Seidelman’s Desperately Seeking Susan (1985), featuring Basquiat’s former girlfriend Madonna. It’s rumoured that the artist even used the set as a makeshift home during filming. The series of blockbusters are designed to complement Basquiat: Boom for Real. They coincide with the exhibition’s emphasis on outstanding creativity during a period of political and social upheaval.

If you have enjoyed reading this article: ‘Boom for Real: Jean-Michel Basquiat’, click here to read more on Arts & Collections about Cristóbal Balenciaga’s new retrospective.