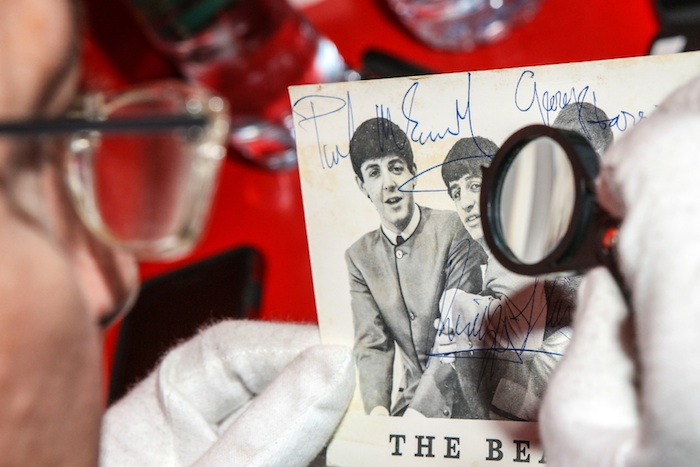 The event, which is being held at Hard Rock International—home to the world’s largest collection of music memorabilia—will give members of the public, fans and collectors the chance to have their Beatles and Rock ‘n’ Roll memorabilia appraised for free by experts.

Following the success of previous events held in Liverpool and London, where a steady stream of visitors brought an eclectic array of artifacts for valuation, both Julien’s and The Beatles Story anticipate a high level of interest.

Fans based in the U.S. are being urged to check their attics and garages for any hidden gems.

‘John Lennon spent a lot of time in New York during his solo years and we are convinced there will be some valuable and fascinating historical items just waiting to be discovered.’

Among the items from earlier events was a collection of 26 negatives containing rare never-before-seen photographs of John Lennon.

The images, which appear to depict intimate portraits of the former Beatle, were taken in February 1970.

Another unique find, a letter written by The Beatles’ John Lennon to the Queen, explaining the singer’s reasons for returning his MBE, was valued by Julien’s Auctions at around £60,000.

The letter’s owner, who wishes to remain anonymous, discovered the item tucked away inside the sleeve of a record that was part of a collection picked up for £10 about 20 years ago.

The ‘Discovery Day’ will take place at Hard Rock Cafe New York on Thursday 17th May 2018, from 3pm until 8pm.