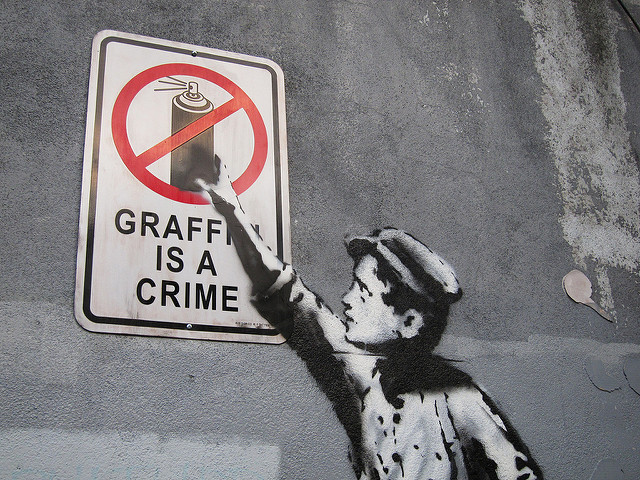 The sale of Banksy’s Civilian Drone Strike (2017) has raised £205k for groups against arms trade. The piece was sold at auction by Art the Arms Fair—an exhibition opposing an arms fair that took place in East London.

Within the first week of Defence and Security Equipment International (DSEI) arms fair in ExCeL London, more than 100 protesters were reportedly arrested.

The money from the sale of Banksy’s Civilian Drone Strike will be split between the groups Reprieve and Campaign Against Arms Trade. The piece itself depicts three drones that appear to be bombing a child’s drawing of a house. The auctioneers themselves described the medium as ‘Polymer resin, spray paint and destroyed children’s drawing’.

While the DSEI arms fair takes place every two years, Art The Arms Fair made its debut in 2017. They state on their website: ‘Time after time illegal torture equipment & cluster bombs are on sale, and the majority of countries on the UK Foreign & Commonwealth Office’s own list of human rights & democracy concerns list will be invited.’

Andrew Smith of Campaign Against Arms Trade added: ‘The arms fair is a moral abomination, it thrives on dodgy deals and secrecy—regardless of the consequences. If the government is determined to keep ignoring serious accusations of war crimes, as well as terrible repression and UK public opinion, then we need to take action.’

Campaign Against Arms Trade is an organisation that works to end the international arms trade. They were awarded the Right Livelihood Award in 2012 for innovative and effective campaigning against the global arms trade.

Smith said: ‘[The money raised] will be used to ensure we mobilise even more people against the immoral activities of arms companies, and against the next arms fair, so that we can stop it from happening. It’s time to shut it down for good.’

Reprieve is a group of ‘human rights defenders’. Recently, they have been collecting signatures for a petition against the ‘kill list’. The cosmetics retailer Lush has been a big supporter of this campaign.

It isn’t surprising that Banksy supports these organisations. Earlier this year a piece with a similar anti-war message depicting a girl hugging a bomb, which was painted on cardboard, sold for £10,000. The artist also created a piece featuring a young girl in a pink dress frisking a soldier back in 2007. In 2017 Banksy opened a hotel called ‘The Walled Off Hotel’ which claims to have ‘the worst views in the world’. All of the 10 rooms face the Israeli separation wall in the West Bank.

Other artists featured at the Art the Arms Fair were the Guerilla Girls, Peter Kennard and Darren Cullen.