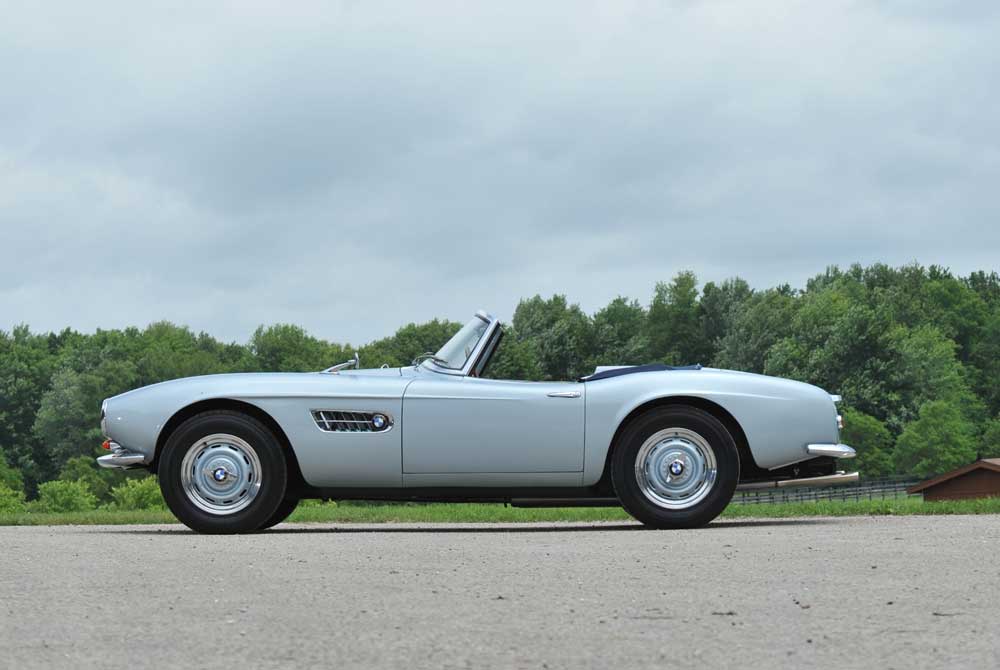 Automobilia Collectors with a passion for classic cars and motorcycles congregate every year to bid at the Exceptional Motorcars, Motorcycles and Automobilia auction, held this year at Pebble Beach.

Held during Pebble Beach Car Week in the picturesque location of Carmel Valley, California, the Exceptional Motorcars, Motorcycles and Automobilia auction is renowned for drawing in collectors from around the world to bid fiercely on their chosen motors. However, this year’s sale had a slightly different edge, as motorcycles had also been added into the eclectic mix.

Ben Walker, Bonhams’ International Director of Motorcycles, said: ‘Motorcycles are consistently attracting the interest of discerning motor vehicle enthusiasts and collectors, and their rising values confirm this.’ He added: ‘The addition of rare motorcycles at Quail Lodge is highly complementary to rare motorcars.’

Attendees at the Exceptional Motorcars, Motorcycles and Automobilia auction clearly approved of the additional motors, with total spending reaching an impressive $11 million (£6,850,800). It evidently showed that, even though we may be in troubled economic times, bidders were not afraid to part with their money for
quality investments.

Despite the excitement surrounding the motorcycles, it was always going to be the sports cars that caused the biggest buzz within the room, with bids for the 1957 BMW 507 Roadster realising just over $1 million (£622,800). Although popular during its heyday with celebrities like Hans Stuck and Elvis Presley, sales figures of the 507 were never profitable and BMW ceased production of the car after just 252 models have been made. The 507’s rarity and that each model was superbly hand-made led to the car being a popular choice for collectors.

The biggest shock in the racing car section came in the form of the 1957 BMW M1 Pro Car. Part of the ‘Art Car’ series, the M1 impressed the packed sales floor by blowing out all pre-sale estimates, with the final sale figure reaching $852,000 (£530,710.80.) The ‘Art Car’ series began in 1975 when Alexander Calder was commissioned to paint a car that was to be used during the 24 Hours of Le Mans race (the world’s oldest race sports car race).

The series has since evolved with other modernists joining in, including Andy Warhol, Roy Lichtenstein and Robert Rauschenberg. However, it was Frank Stella who put paint to car to design the M1. Specially ordered by world champion IMSA racer Peter Gregg, the car was painted as a tribute to the memory of his and Stella’s mutual friend, Formula 1 Grand Prix winning driver, Ronnie Peterson. Since 1999, the M1 has been kept at Guggenheim Museum until it was decided that it should go up for sale. All proceeds from the sale have gone towards supporting art acquisitions at the Guggenheim Museum.

Other vehicles to excite the eager bidders included the 1937 Duesenberg Model J Limousine, which sold for $220,000 (£137,038). Built at the special request of the Vatican to Ford Motor Company, it was used to convey Pope Paul VI around New York as he addressed the United Nations on World Peace. The ‘Popemobile’ was also used during the Chicago parade for the Apollo astronauts, its backseat passengers including Neil Armstrong. Despite the limousine’s impressive history, and the fact that it has been present for such memorable events during the sixties and the early seventies, the car has been well maintained and is in exceptional condition.

The enthusiasm that surrounded the Exceptional Motorcars, Motorcycles and Automobilia auction is not to say that the motorcycle sale didn’t leave ripples of excitement within the auction room as it most certainly did. The addition of the bikes clearly paid off, with the majority of the sales for the two-wheeled motors
exceeding expectations.

Mark Osborne, head of Bonhams’ US motoring department, said: ‘We are proud of our pioneering spirit and offering a select group of motorcycles demonstrates that we are not adverse to trying new initiatives.’

The motorcycles proved popular with bidders when a record sale was created for the 1928 Coventry-Eagle 980cc Flying-8 OHV, which went for $263,500 (£164,160.50), more than £5,000 over its estimated sale price. Having been considered to be the most attractive and expensive motorcycle of its time, the bidders gave this bike a warm reception. Consigned from a collection in England, the hand-built speed machine is rarely seen on the open market. For many, its sale provided a once in a lifetime opportunity.

Another highlight in the motorcycle collection was the appearance of the ultra-rare AJS E95 Porcupine. Named after the spiky cooling fins on its cylinder head, the Porcupine is one of just four E95s completed by the factory.

Malcolm Barber, Bonhams’ CEO, said: ‘As far as motorcycles go, the Porcupine is at the very top… It is arguably the most beautiful, graceful and innovative racing motorcycle ever built, the perfect blend of technology and art.’

Until the sale, the motorcycle had been on display for more than two decades at the National Motorcycle Museum, England. However, estimated to sell upwards of $750,000 (£474,000), the Porcupine failed to excite bidders as much as has been predicted and bids fell shy of the reserved price.

Mark Osborne commented: ‘Negotiations continue [on the Porcupine] and we’re hopeful of concluding a sale.’

The Exceptional Motorcars, Motorcycles and Automobilia auction has become a celebration of historic motors, attracting collectors from around the world. Before the dust had even begun to settle after the 2011 auction, Bonhams has already begun preparations for next year’s sale, to be held during Monterey Car Week in August 2012.