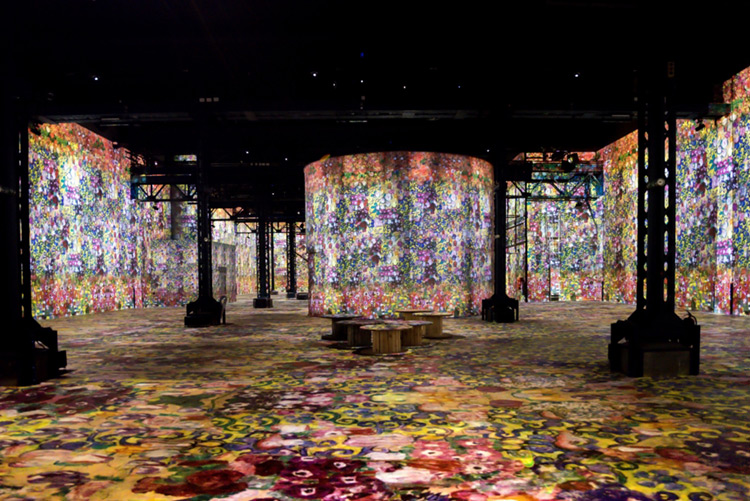 Art has taken a giant leap into the modern era this year, illustrated by Atelier des Lumières’ unveiling of an immersive Gustav Klimt exhibition.

The digital gallery—which translates to ‘studio of lights’—in Paris is transforming the way we consume art by allowing visitors to walk in and amongst the work of the world’s most prolific painters. Projection-based compositions create a whole new dimension of wonder for attendees to explore. The exhibition manipulates light and perspectives; towering images create an impressive spectacle of well-known masterpieces. Despite the show being in its infancy, it reportedly attracted 60,000 visitors in its first 10 days of opening.

The Atelier des Lumières display is managed by Culturespaces; it comes on the heels of a similar project the company managed for an establishment called Carrières de Lumières. On the opening of the contemporary museum, the president of Culturespaces said: ‘The role of an art centre is to de-compartmentalise and that is why digital technology is so important in 21st century exhibitions.

‘Used for creative purposes, it has become a formidable vector for dissemination and is capable of creating links between eras, add dynamism to artistic practices, amplify emotions and reach the largest possible audience.’

Located in a 19th century foundry of over 3,000 m², the venue seeks to map out Klimt’s ‘golden age’ and his association with the Vienna Secession—a movement that concerned itself with exploring art outside the confines of academic tradition.

Klimt was a symbolist painter and is revered for his stunning paintings, murals, sketches and other objets d’art. Much of Klimt’s work harnessed gold leaf, allowing his compositions to blaze with glowing splendour. One such example is The Kiss (1907-8), which is perceived as one his most famous masterpieces. This will feature in the event alongside other marvellous samples of his work. Other artists will appear within the display such as Friedensreich Hundertwasser—another Viennese visionary. Although Hundertwasser’s work became popular several decades after Klimt, his art echoes similar traits: namely the use of abstract shapes and vibrant hues.

The curators have harnessed the capabilities of approximately 120 projectors and a spatialised sound system in order to bring the event into fruition. Artwork within the immersive Gustav Klimt exhibition covers walls, ceilings and floors, with some standing at 10 metres tall. A specially curated soundtrack will play as visitors traverse the artistic landscape set out before them, further enriching the experience.

The immersive Gustav Klimt exhibition will display until 31 December 2018.