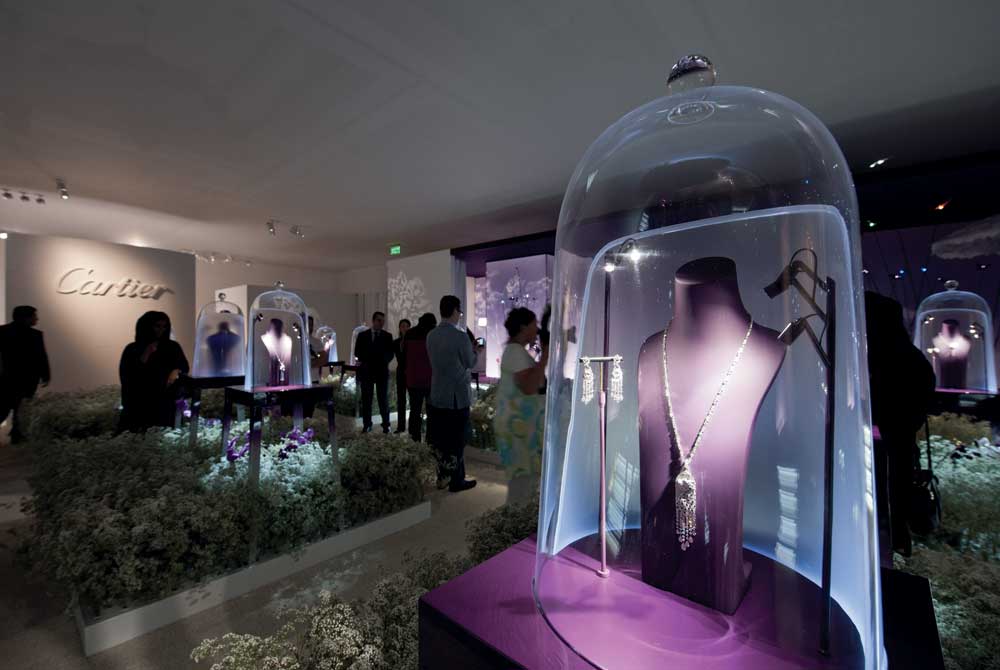 ‘Big girls need big diamonds. I adore wearing gems, not because they are mine. You can’t possess radiance, you can only admire it.’ Elizabeth Taylor was referring to the diamond ring bought for her by Richard Burton from Cartier renowned for its legacy of fabulous jewellery worn by many of the world’s most glamorous women. Earlier this year, Cartier was the most prestigious exhibitor as well as the main sponsor at Art Dubai, the international art fair.

The glamour, glitz and multicultural aspect of Dubai, which attracts and encourages businesses and entrepreneurs from around the world, has proved an ideal location for this now well established international art fair. Currently in its sixth year, Art Dubai was held at the resort of Madinat Jumeirah ‘Harbour of Peace’ where boutique hotels and courtyard summer houses border the beach. Seventy-five galleries were represented from around the world.

From its humblest beginnings, when Cartier was founded by watchmaker and jeweller Louis-François Cartier in Paris in 1847, the company went on to make many magnificent pieces, most famously the diamond necklace for the Maharaja of Patiala, Bhupinder Singh.

The necklace commissioned by him in 1925 was set with a pale yellow octahedron diamond weighing 234.69 carats. In the 1900s, Cartier made over 22 diamond tiaras for British royalty and during the 1940s, regular customers included Edward Prince of Wales and Wallis Simpson, for whom the famous Panthere Brooch was created, the beginning of Cartier’s ‘bestiary’ themed jewels.

At Art Dubai, the design and craftsmanship of Cartier’s jewellery was presented alongside the work of both new and established artists’ paintings, sculpture and installations. Displayed among gem inspired paintings especially commissioned by Cartier from the internationally acclaimed Brazilian artist Beatriz Milhazes, its latest ‘Cartier Naturellement’ collection of jewellery continued its iconic ‘bestiary’ theme of symbols from nature, themes that were originally used to illustrate manuscripts and first made popular in England and France in the twelfth century.

The panther, symbolising timeless and fearless femininity, remains the ultimate emblem for Cartier: ‘Regal and charming, she is aware of the world around her and follows her instinct with a sharp emerald eye, ready to pounce and enjoy life to the fullest.’ A gold panther with black enamel spots crouching on a cabouchon emerald was a brooch commissioned by the Duke of Windsor in 1948, one of a number of panther-inspired pieces he commissioned for Wallis Simpson.

In 2012, her famous articulated panther bracelet sold at Sotheby’s for a record-breaking £4.5 million. Shown at Art Dubai earlier this year, the latest ‘Cartier Naturellement’ collection continued the theme of exquisite jewelled wild life—birds with sapphire eyes and flowers of diamonds, sapphires, rubies and emeralds each displayed as miniature works of art in their own right.

Michael Jeha, Managing Director of Christie’s Middle East says: ‘Records tumbled in a standing-room-only saleroom, reflecting the increasing international appeal and quality of art from the Middle East. We were delighted to add 42 records to the 318 already established by Christie’s sales in the Middle East since 2006.’

Collectors visiting Art Dubai this year included Susan and Michael Hort from New York, whose Rema Hort Mann Foundation supports emerging artists. Beijing collector Richard Chang had come with a group from MoMA—one of 60 museum visitor groups. ‘This is my first visit and I’m adoring it. I really didn’t know the art of the region well,’ he said shortly after purchasing works by Tala Madani at the stand of London-based Pilar Corrias herself showing for the first time at the fair.

Artist Rashid Rana from Pakistan was first shown at Charles Saatchi’s gallery in London and was popular this year at Art Dubai. Rana collects imagery from magazines and disparate sources selecting and reassembling minute segments of them to create familiar imagery.

Regarding his painting ‘Red Carpet’, he explained: ‘to puzzle the audience is not the main objective; it’s more to do with taking fragments to create something very familiar. But when one looks at both the bigger and smaller picture together, it is then that preconceived notions about certain phenomena are challenged. Then they (the audience) make new connections and a meaning through very familiar imagery.’

Though Saatchi is renowned for his ‘Sensation’ exhibition of Young British Artists in 1997 at the Royal Academy, which sparked an explosion of controversy regarding new British art, he has long advocated Middle Eastern art and was one of the first to promote artists from the region overlooked by many other galleries. With regard to purchasing contemporary art, he says: ‘At the risk of being lynched—again—by the art crowd, I don’t think there is a great need any more to save paintings for the nation at the cost of supporting new art.

What difference does it make if a Titian is hanging in the National Gallery, the Louvre or the Uffizi? This isn’t the eighteenth century: people travel, so there’s no need to be nationalistic about the world’s art treasures. Much more important is to back living artists.’

Art critic Anthony Haden-Guest has also followed the Middle Eastern art market with interest for some time. ‘I find Art Dubai of particular interest,’ Haden-Guest says. ‘Contemporary art fairs tend to have an identikit aspect, the Big Four most unmistakably.

We talk about the “globalism” of the new art world and, yes, it has grown bigger in every way and, yes, the technology of communications makes mountains of data available 24/7 and, yes, uber-artists are global in the same sense as soccer-players and conductors. Abu Dhabi to me seems to have the international art market covered, so that you are more likely to see all the big western and American names on display there.

‘At Art Dubai, I saw no Damien Hirsts on the stands, no Richard Princes, no Murakamis and just one Warhol. Art Dubai is a regional fair, and it is all the more interesting for that. It is stronger on Arab art with some very good Iranian art. It’s not just another cookie-cutter fair selling blue-chip art. They are seriously showing what is being made out there in the region.’

Art Dubai International art fair is held annually in March under the Patronage of HH Sheikh Mohammed bin Rashid Al Maktoum, Vice-President and Prime Minister of the UAE, Ruler of Dubai. You can find out more at www.artdubai.ae