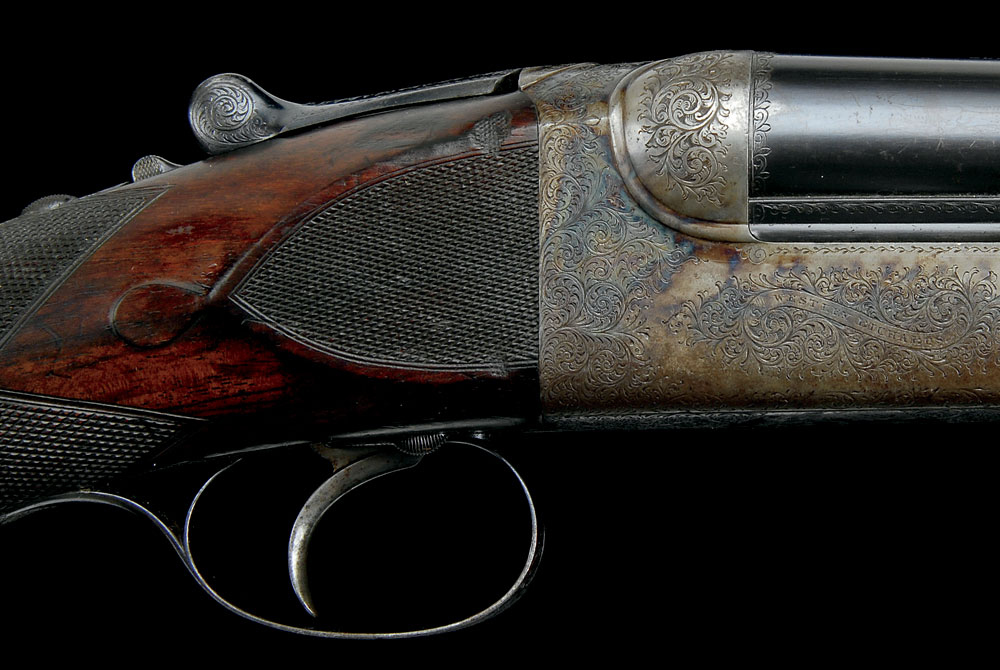 This is a collectors’ category with a very strong following. This field is a broad one and the following is an overview of just a few of the items that excite collectors of arms and armour.

Why Ernest Hemingway’s popularity as a writer should have faded so considerably since his heyday may in part be to do with some of the topics he wrote about so well—bullfighting and big game hunting—both sports now being either outlawed or considered barbaric. Wherever you stand on these topics, you’d have to admit Hemingway wrote magnificently about his African big game adventures, in books such as The Green Hills of Africa (1935) and The Snows of Kilimanjaro (a story first published in Esquire in 1936).

Arms and armour collectors will be more interested than literature lovers to know that a unique rifle recently came up for auction, a rifle used by Hemingway during his African adventures. This is the Hemingway’s W. Richards .577NE double rifle, sold through the leading auction house dealing in quality firearms, James D. Julia Inc (www.jamesdjulia.com/firearms.asp).

Westley Richards are known for designing guns specifically for the individual and they say that the double rifle is ‘the ultimate hunting rifle’. Hemingway’s .577 is at the upper end of the double rifle caliber, with only the .600 being at the top of the range. Gunsmith James Purdey the Younger described these double rifles in the 1850s as ‘Express’; they were, he thought, like an express train because of their ‘flat trajectory, heavy weight and high speed’.

The trend for firearms collecting remains strong especially in the U.S. where the firm James D. Julia says it has now established itself as the foremost firearms auction company in the world: ‘For five years we have consistently conducted some of the highest grossing firearms auctions in history.

In addition, our average sale value per lot recently topped $15,000 (the industry average varies from $800-3,000 per lot.) In October of 2008, we sold a rare Colt Walker pistol for $920,000, the most expensive single firearm ever sold at auction. Our focus and our success tends to be on the more rare and valuable items, whether it be important Winchesters, rare Colts, high art shotguns, Civil War or Class III machine guns.’

Fine custom-made shotguns continue to be built today—producing the collectors’ items of tomorrow. The names of Piotti, Purdey and Holland & Holland have produced some of the most famous shotguns over many years, pieces that every discerning sportsman and woman aspires to own. At the top of the league, as these gunsmiths are, craft and art are inseparable. Taking design and balance as a given, we then move into the exclusivity of the quality of the walnut gunstock, the type of grip, with metalwork enhanced by steel engravings of unique quality by master engravers such as Nigel Westaway Hand Engravers based in Plymouth, Devon.

Top Italian gunsmiths Fratelli Piotti say: ‘We produce a complete range of shotguns, able to satisfy the taste of each single passionate hunter or collector. We are the only producers in the world offering such a wide range of models, however, our annual production is intentionally limited to just a few dozen pieces. Unique, exclusive pieces. Just perfect!’

Also in great demand and of increasing scarcity over the last thirty years or so are Japanese arms and armour, with items dating from the eighteenth and nineteenth centuries proving to have been remarkably good investments for collectors who bought at the right time—the right time being before the strong buy-back trend set by Japanese and other oriental collectors. This trend has seen some superb examples of Japanese swords, for instance, bringing higher and higher results in western auction houses, where Japanese collectors vie with western collectors to bring their treasures home.

A sale last year at Christie’s saw a Japanese Wakisashi from the third quarter of the seventeenth century double its estimate to sell for £2,375. In the same sale, a Japanese Katana with a mid-eighteenth-century blade, also doubled its estimate, selling for £2,375—this piece being described as ‘with single-edged polished blade of traditional form and construction, the later hilt comprising nam bam tusba retaining some original gilding, matching fuchi kashira decorated in low relief with gold foliage, and cord-bound shagreen-covered grip, in black scabbard 27in (68.5cm) blade’.

If you’ve ever viewed up close the extreme craftsmanship in a Japanese sword of the eighteenth century or earlier, you’ll understand why these pieces are so coveted by collectors. Each part of the blade, for example, has a specific name; even the tempering pattern on the blade is respectfully named (hoso-suguha).

One such sword very recently on the market, through Christie’s New York, is an Echigo tachi—a unique sword blade from the Muromachi period (fourteenth century), estimate $7,000. The majority of fine-edged weapons in this category are now registered as works of art, Tokubetsu kicho token (Sword worthy of preserving), by the Society for the Preservation of the Japanese Art Sword.