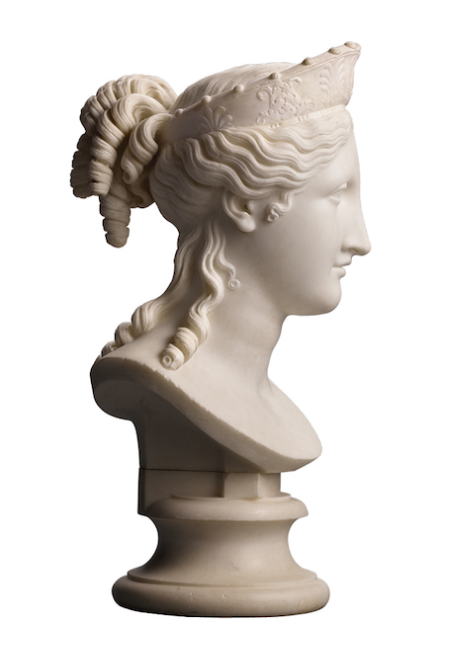 A Sotheby’s auction will offer a stunning masterpiece by revered Italian sculptor Antonio Canova at its 4 July sale in London.

Bust of Peace (1814), not seen in public for more than 200 years, is one of only a handful of autograph Canova works to ever come to market.

The monumental work, first shown at the 1817 Royal Academy summer exhibition, was carved for Canova’s first British patron and close friend, John Campbell, Lord Cawdor. A lover of Italy and connoisseur of the arts, Lord Cawdor wrote to Canova in letters that reveal their enduring friendship.

Canova’s Bust of Peace was given, in part, to thank Lord Cawdor for his help in repatriating art from Italy, looted by French armies during the Napoleonic Wars. The sculpture belongs to Canova’s illustrious series of Ideal Heads (Teste Ideale). Perhaps among the artist’s most intimate works, the Ideal Heads convey Canova’s ideal of beauty and were produced as gifts for his loyal friends and patrons.

The captivating Bust of Peace was passed down through generations of the Cawdor family, following John Campbell’s death in 1821. Over time, the sculpture was forgotten.

Now, following extensive research by the present owner, who acquired the sculpture as an unattributed work, it has been identified as the Bust of Peace. The masterful work is a significant rediscovery, of seminal importance within Canova’s oeuvre, and has great historical resonance.

‘This is one of the most exciting rediscoveries I have encountered, the culmination of years spent piecing together fragments of information that together now tell the complete story of what is a truly exceptional, long-lost work,’ said Christopher Mason, director at Sotheby’s European Sculpture & Works of Art department.

‘Each marble is executed with a befittingly high degree of care and attention. The sculptor’s ability to breathe life into cold marble is unrivalled in neoclassical sculpture.’

Mason described the sculpture as a technical tour de force, displaying Canova’s absolute mastery in marble, particularly with the beautiful carving of the hair and the purity of the expression.

‘Autograph works by Canova are fantastically rare on the market,’ Mason explained. ‘To be offering this bust, newly rediscovered and with such a special story behind it, is something remarkable indeed.’

Canova (1757-1822) is the artist behind one of the UK’s most celebrated sculptures, The Three Graces and is as esteemed today as he was in his lifetime.

Honoured in verse by Lord Byron, Canova was considered the preeminent sculptor of his time, recognised not only for his carving skills but also as a diplomat and dignitary for the Papal court.

Canova was one of the few artists to transcend political restrictions imposed by revolutionary awakenings and the Napoleonic wars. Despite only having visited England on one occasion, he had enchanted the nation with his sculpture of The Three Graces, completed and delivered to Woburn, the family seat of the Duke of Bedford, and now The Victoria and Albert Museum, London.

A symbol of peace

Canova’s Bust of Peace is indicative of its time. Presented by the artist to his patron and friend within months of Napoleon’s downfall, it represents, by virtue of its subject, the peace brought about by the Great Powers.

At the very least, the Bust of Peace was offered as a token of Canova’s gratitude, as Pope Pius VII’s plenipotentiary minister, towards the British for their role in defeating Napoleon.

Canova was first approached to sculpt a full-length statue of Peace by the Russian Foreign Minister and Chancellor Count Nikolay Petrovich Rumyantsev (Romansov) in 1811.

The Romansov family had a long and distinguished history as peacemakers. The Count’s commission for a statue of peace in 1811 was intended to serve as a memorial to his family’s role as peacemakers in Europe.

It came at a time when Canova’s reputation in Russia was approaching its zenith. Due to the hostilities between Russia and the French Empire in the intervening period, the Statue of Peace was only finished in 1815, and delivered to St Petersburg in November 1816. The statue is now in the Varvara and Bogdan Chanenko Museum, Kiev.

If you enjoyed reading this article, click here to read more about Sotheby’s sale of an extremely rare Imperial porcelain vase as part of their sale of Asian art in Paris this June. And click here to read about the stunning Atelier des Lumières immersive Gustav Klimt exhibition.