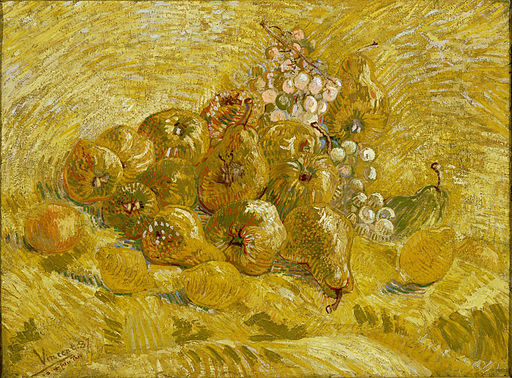 Yellow has been one of the major colour trends of 2017—Emma Stone’s sunshine yellow dress in the Oscar-winning La La Land led to yellow dresses popping up everywhere, from high street shops to the red carpet. While the popularity of the colour has somewhat been revived in recent times, the hue itself isn’t new. Alongside red, yellow is one of the oldest colours in art history.

Yellow is present in some of the oldest paintings dating back to ancient Egypt and ancient Rome—it can even be found as far back as prehistoric times featured in cave paintings. The yellow sun has been worshipped by countless religions with numerous sun gods wearing yellow as representations of it. Because of its associations with sunlight, yellow is often seen as a warm colour, accounting for the connotations with happiness and optimism.

Alternatively, in religious paintings, yellow is typically the colour Judas wears—in Christianity it symbolises deceit. It is possible that this negative root is the reason the colour also symbolises cowardice: an example of this is the American expression, ‘yellow-belly’. In Christianity, the colour also grew to represent outsiders of faith. During the Renaissance Jewish people were marked with the colour yellow. This was brought back in the times of Nazi Germany, when Jews were marked with a yellow star.

Yellow ochre is one of the oldest pigments in existence. Cave paintings over 17,000 years old use this pigment, which was made from the natural ochre mineral. An artificial substitute for yellow ochre was found in the 1920s, and it is still used today.

Van Gogh is known for using multiple vibrant colours in his art such as blue, due to his experimental and innovative style. He used yellow most of all. This can be seen most famously in his sunflower paintings and The Yellow House (1888). In Irises (1890) he contrasts the blue of the flowers with a bright yellow background, and similarly in The Starry Night (1889) he uses yellow to emphasise the stars and the moon. A lesser-known painting, Quinces, Pears, Lemons and Grapes (1887), showing the artist’s skill in the utilisation of colour theory, was painted with almost exclusively one shade of yellow but still creates a coherent still life.

Yellow is thought of as a very bright colour, and it is often used to emphasise certain aspects of a work of art. During Picasso’s blue period, while blue was the colour he predominantly used, the painter incorporated yellow as a contrast and highlight for faces and significant objects. Renoir would use yellow to add shine and definition to hair, or to bring out the most important element of a painting, such as the boat in The Skiff (1875).

Outside of the art world, yellow stands out as a colour, hence why it is often used as a key colour of emergency vehicles and taxis. The colour gave an added significance to The Beatles’ song Yellow Submarine (1966)—the band have always said that it was intended as a fun children’s song, however many commentators believe it has a hidden meaning. Time magazine interpreted it as a “symbol of the psychedelic set’s desire for escape”. As music journalist Peter Doggett wrote, the song “became a kind of Rorschach test for radical minds.” Most likely these interpretations came about due to the use of the colour yellow—the complete opposite to the steely greys and khaki greens with which such watercrafts are usually painted.

Despite being the colour most associated with optimism and happiness, yellow is not a very popular colour. In a 2000 survey, only six percent of respondents said their favourite colour is yellow, compared to the 45 percent whose favourite colour is blue. Nevertheless, it is still a colour widely used in contemporary art and in commercial marketing.

Read more: A History of the Colour Green