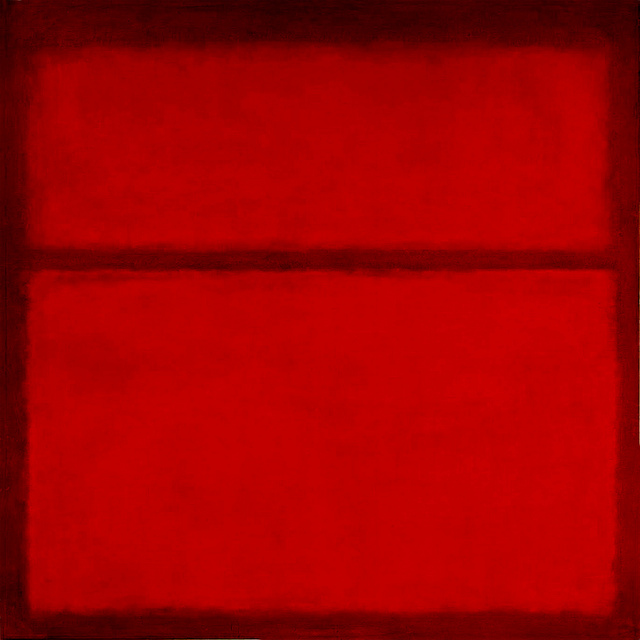 Throughout history, the colour red has had two opposing connotations; good and bad, love and anger. Either way it is certainly the colour of passion and strong emotion, and is one of the oldest colours used in art.

Unlike the colour blue, red pigment exists in abundance in nature—from human and animal blood to red dirt and metals. Ochre, a clay coloured red by iron oxide, was ground up and used as body paint and to create cave paintings. In a cave in Spain, a painting of a bison dating back to 16,500-15,000BC was found coloured with this red ochre. Other early red pigment came from lead tetroxide, used by the Han Dynasty in China (200BC to 200AD), the rubia plant from India, cinnabar and cochineal, which up until recently was used as a red food dye by Smarties chocolate.

In the Renaissance period, bright reds were used to draw attention to the most important figures in a painting. A great example of this is The Assumption (1516-1518) by Titian, a painting in which the figures of God, the Virgin Mary and two apostles are highlighted by their vermillion robes. Some artists would make their reds even brighter with the use of translucent glazes that gave the colour additional luminosity. This effect can be seen in Vermeer’s The Girl with the Wine Glass (1659-1660).

In Asia the colour red is commonly associated with luck and happiness and is also the colour of traditional Indian and Chinese bridal outfits. In the Indian subcontinent, women put red dots on their forehead or scalp to show that they are married. In contrast, red in western culture is seen as a symbol of sexuality, hence why brides where white to symbolise purity. This can be derived from the use of the colour in Christian imagery; for example in the Book of Revelation, the Whore of Babylon wears red and ‘sits upon a scarlet coloured beast’. Even today, red is associated with prostitution; Bangkok and Amsterdam’s red light districts are a prime example of the link between the colour and promiscuity.

Red has been used as a colour of war and rebellion for many historic events. ‘Red: the blood of angry men’ sing the French revolutionaries in the musical Les Misérables while the British army were known as the ‘red coats’ during the American Revolution. Additionally, in ancient Roman mythology, Mars the god of war was associated with the colour red, hence why the ‘red planet’, coloured by iron oxide, was named after him.

Red paint has a notoriety, but not for the reason you would expect. The colour is known to fade and change over time—a famous example is in Van Gogh’s work as the red hues in his paintings, especially those mixed with other paints, faded after as little as 20 years. You can see this in his 1890 painting, Roses, where the flowers—once pink—are now green and white. This affects certain pigments more than others.

Some art enthusiasts have pointed out that the highest-earning paintings on record heavily feature the colour red such as Munch’s The Scream (1893) and Modigliani’s most expensive nudes. No. 6 (Violet, Green and Red) (1951) by Mark Rothko sold for $186m in 2014—the artist was known for the use of the colour red in his abstract paintings. He used the colour to inspire deep emotions, stating that his interest was ‘in expressing human emotions tragedy, ecstasy, doom, and so on.’

If green is the colour of nature, in today’s world red is the colour of humanity. Despite the differing views of different cultures on the colour, it features heavily in art and design. It is one of the most used colours for country flags and official uniforms—yet it still has connotations with anger and sexuality. It is likely that this confused colour holds so many meanings simply because it was one of the very first pigments used by humans. As an old colour, it has come a long way.