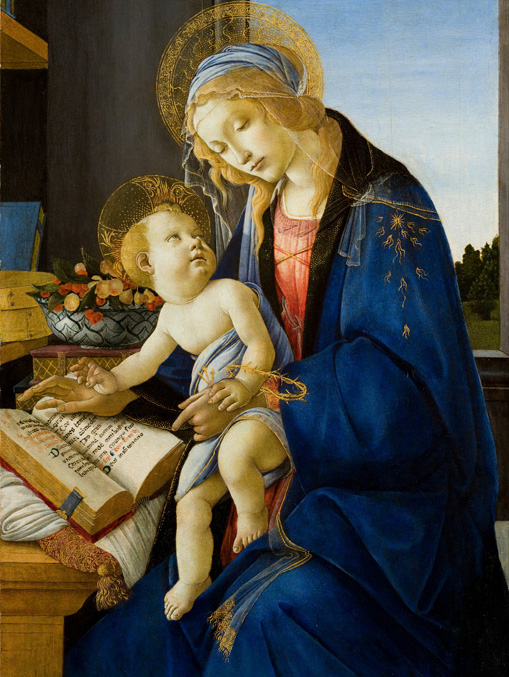 What does the colour blue remind you of? The hue has been an important part of art and paintings for centuries; Arts & Collections takes a look at its history.

Go back far enough into art history and you will find that the colour blue—as we know it today—simply did not exist. The ancient Greeks didn’t seem to have a word for it, combining it instead with what we would think of as several different colours, such as red and purple. Homer himself typically described the sea as ‘wine-dark’ rather than calling it blue.

In art, the colour blue was deemed a luxury. In nature, blue pigment is hard to come by—in the early days of art and painting there were no immediate materials to make this particular dye with. It wasn’t until the Egyptians started mining and found lapis lazuli that people were able to create art featuring the colour blue. As a semi-precious stone, lapis lazuli was very expensive; it was ground up to make the valuable ultramarine pigment used by artists for centuries to come. Blue was later made by combining metals, but until a method of extracting dye from the leaves of plants was found, blue was—for a long time—seen as a prestigious colour.

Due to its value, the colour blue was used to depict important people in Renaissance and pre-Renaissance eras. The Virgin Mary is most commonly depicted wearing blue as a mark of respect and to make her stand out. Blue became associated with royalty when the monarchy in France began regularly wearing the colour—a fashion trend that was adopted by royals from other countries. In the 12th century it became part of the royal coat of arms of France; paintings of the mythical King Arthur began to show him dressed in blue.

While blue continued to be seen as a prestigious colour in art, the introduction of plant-based dyes for clothes meant that blue became available to the masses. Indigo and wode were made by soaking plant leaves. Working class people were able to don this ‘luxurious’ colour, but artists still struggled to find a cheaper alternative to ultramarine to use in their paintings. Before a decent alternative was found, high quality ultramarine cost more than gold gram for gram.

For centuries, artists tried to find blue colours that would not only look good, but were also cheap and long lasting. Prussian blue was ‘invented’ in 1709 by Johann Jacob Diesbach because of his experimenting with potassium and iron sulphides.

This new colour was favoured by many painters. The famous Japanese painting, The Great Wave (1829-1833), uses this new blue. Impressionists used it alongside newly invented blue pigments. Renoir, Turner and Manet regularly used cobalt blue to create many notable paintings. Van Gogh wrote of cobalt blue: ‘There is nothing so beautiful for putting atmosphere around things.’ The Impressionists experimented with the colour and placed it against its complementary colours of orange and yellow.

In the early 20th century, Picasso dedicated a whole era of his painting to the colour blue. His ‘Blue Period’ utilises the emotional and symbolic values of the colour. He painted many monochromatic paintings of beggars, prostitutes and drunks, reflecting his depression following the suicide of his friend Carlos Casagemas.

Today, blue is used in a great variety of ways. It can be a serious colour, like the blue uniforms of the New York City Police Department; or it can be emotional and used to display sadness or faith. The colour has given its name to a number of movements: the Bluestockings women who campaigned for female education rights were given the name due to the colour of their informal blue hosiery; blues music got its name from its trademark sad and melancholic themes. Although it is a primary colour by all modern accounts, our world had to go a long way to get the great variety of blues we have today.

Read more: A History of the Colour Red