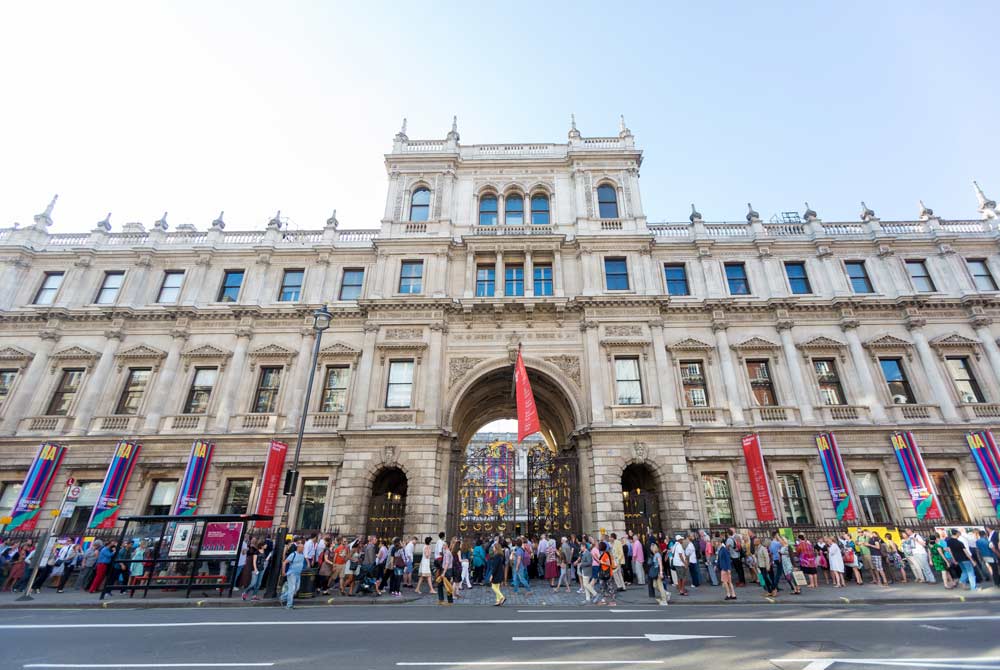 The Royal Academy of Arts was established in 1768 and has been in Burlington House since 1775. The Royal Academy is internationally renowned for its support for artists as well as its many important and inspirational public exhibitions.

There are a great many more reasons than eight for visiting the Royal Academy of Arts in London; however, we must limit ourselves to a selection of masterpieces from an exhibition of more than 120.

As our thoughts turn to springtime and the promise of warm summer gardens, the latest blockbuster exhibition at the RA is one exceptionally good reason to come to the capital city and centre of the art world.

‘Painting the Modern Garden: Monet to Matisse’ examines the role gardens have played in the evolution of art from the early 1860s through to the 1920s.

With good reason, the starting point of this inspiring garden stroll is Monet, who, perhaps more than any other painter in the history of art—through his later and obsessive painting of his garden at Giverny in particular—opened the gate onto a new vision of the garden landscape and its meaning.

The paintings displayed at the Royal Academy help us to trace the emergence of the modern garden in its many forms and glories, taking us through a period of great social change and innovation in the arts. Here are the paintings of some of the most important Impressionist, Post-Impressionist and Avant-Garde artists of the early twentieth century as they explore this garden theme.

Monet, arguably the most important painter of gardens in the history of art, once said that he owed his painting ‘to flowers’. But Monet was far from being alone in his fascination with the horticultural world—the exhibition includes garden-inspired masterpieces by Renoir, Cezanne, Pissarro, Manet, Sargent, Kandinsky, Van Gogh, Matisse, Klimt, and Klee.

For these artists and others, the garden gave them the freedom to break new ground and explore the ever-changing world around them. Highlights include a remarkable selection of works by Monet, including the monumental Agapanthus Triptych, reunited specifically for the exhibition, Renoir’s Monet Painting in His Garden at Argenteuil and Kandinsky’s Murnau The Garden II. The exhibition includes some 120 masterpieces from which we have made a small selection, as follows.

Since 1775, Burlington House has been the home of the Royal Academy of Arts, with the Academy itself established in 1768. The most famous of the RA’s founding fathers is Sir Joshua Reynolds who was the Academy’s first President. In two years’ time the Academy will celebrate its 250th anniversary, by which time some major enhancements to the RA’s facilities will have been made.

It was the garden and its lily pond at Giverny that in later life became an obsession for Monet, who created some 250 paintings of water lilies.

It was in Murnau that Kandinski became a keen gardener, where the inspiration of garden and surrounding Murnau landscapes caused the dramatic and rich intensity of his colours. It is believed that Kandinsky had synaesthia, a condition that causes a person to perceive colour not only as visual objects, but also with sounds of different qualities and intensities. Of colour he once wrote: ‘In general, colour is a means of exerting a direct influence upon the soul. Colour is the keyboard. The eye is the hammer. The soul is the piano, with its many strings. The artist is the hand that purposefully sets the soul vibrating by means of this or that key.’

This is considered one of Sorolla’s finest works. Its broad expanse of colourful yellow, white, and blue flowers, the deep blue of the waters of Long Island Sound flashing in the background, and the complex whites of Tiffany’s summer suit, together create a work of irresistible attraction. Tiffany’s steady gaze engages the viewer as he pauses at his easel, palette and brushes in one hand, the brush with which he works in the other.

Monet Painting in his Garden at Argenteuil, 1873

Renoir and Monet were lifelong friends, often setting up their easels side by side. Argenteuil was a rural escape from Paris at the time of this painting, being just eight miles from the city centre. Today, Argenteuil is a suburb of Paris.

An early Impressionist work by the group’s leader, Claude Monet. Painting outside, en plein air, the garden is drenched in sunlight but there is also a poignancy in this summer scene in the solitary figure.

A masterpiece of panoramic perspective, radiating a sense of tranquil repose in an idyllic summer setting.

The artist met Monet in the same year that Matisse produced this remarkable painting, with its cool but intense colours.

Exhibition has been co-organised by the Royal Academy of Arts and the Cleveland Museum of Art.

With its timeless Regency architecture and central location, offering unlimited opportunities for discovery, Le Méridien Piccadilly is recognised as the landmark hotel in Piccadilly Circus. Relax in the authentic, yet modern décor of our hotel rooms in Central London’s most popular locale and enjoy beautiful facilities such as one of the largest hotel indoor swimming pools in London.

One of the world’s most famous luxury hotels, the Ritz has a total of 136 guestrooms comprised of 111 bedrooms and 25 suites. The exquisite collection of lavishly decorated private dining rooms and residential suites have been retained in their original Italian Renaissance style décor and the majesty of William Kent House is now resplendently reborn.

Read more: MASTERS OF THE EVERYDAY: DUTCH ARTISTS IN THE AGE OF VERMEER