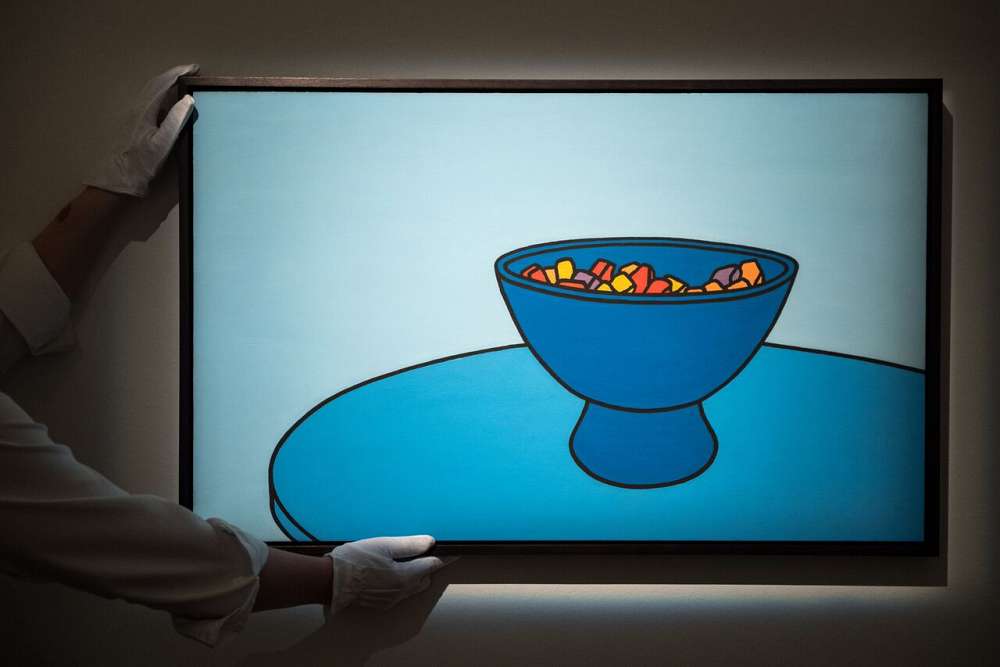 In a week of Sotheby’s auctions, art from the Middle East & India sold for a total of £13.6 million. Across four different sales, over 600 lots were sold—61 percent of which went for prices above their pre-sale high estimates.

The top lot of the week was Bhupen Khakhar’s painting De-Luxe Tailors (1972) from his Tradesmen series. The pre-sale estimate was £250,000-£300,000, however an anonymous buyer snapped it up for a whopping £1,112,750. This broke the artist’s personal record for a painting sold at auction. The highest earning piece that had been sold prior to this auction was Night (1996) which sold for £434,500 in 2014. De-Luxe Tailors was sold alongside several other pieces from the personal collection of Howard Hodgkin, who died earlier this year. The Hodgkin sale was named Portrait of the Artist for the insight it gave into his sources of inspiration and love of Indian art.

Another top lot was Manjit Bawa’s Untitled (Figure with Bull) (1997). Bawa’s pieces are psychedelic whilst still containing echoes of a traditional Indian style. This painting sold for £428,750 at the Modern & Contemporary South Asian Art sale.

The auctions also presented artifacts from around the Middle East. A rare 19th century Ottoman enameled gold dagger with its scabbard was sold in the Arts of the Islamic World auction. The hammer went down at an incredible price nearly five times the estimate at £112,500. The top lot from the Islamic World auction was a magnificent Royal coat embroidered with Basra seed pearls from 19th century India—it was sold for £320,750. Sotheby’s said: “From the golden age of the pearl trade, [the Royal coat] exemplifies the thriving sea-trade between the Gulf and South Asia as well as the craftsmanship in the opulent courts of the Maharajas.”

The week certainly saw an incredible display of high-earning lots driven by participation from 54 countries and the significant number of buyers new to these collecting categories.

Edward Gibbs, Sotheby’s Middle East & India Chairman, said: “The week has been punctuated by benchmark prices achieved in each of the week’s sales, and characterised by the wonderful collection of Howard Hodgkin featuring so fittingly.

“The chapter is yet to be closed on this season’s offerings and the market’s strength. We now look to our inaugural Boundless: Dubai in just a couple of weeks’ time with great anticipation, when a further rich offering with a truly global appeal lies in store.”