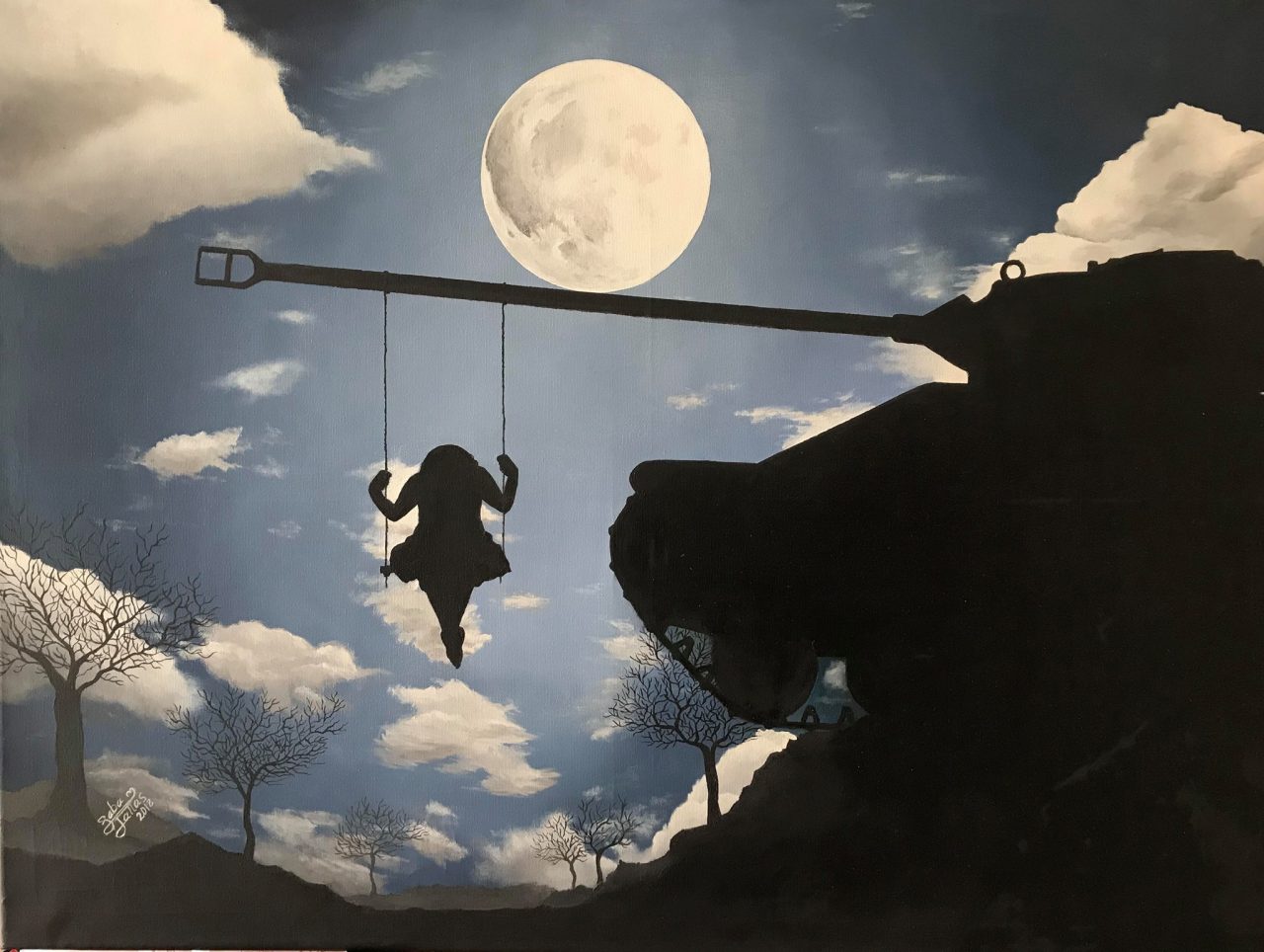 ATAF will present art works from artists across the globe; the line-up includes Peter Kennard, Guerrilla Girls and a selection of other artists from conflict zones. Prior to the exhibition’s opening for public viewing on September 3rd, there will be a private viewing on September 2nd exclusively for the press and artists.

Among the many artists that have submitted their work already are Yemeni graphic designer and cartoonist Ahmed Jahaf, photomontage artist Peter Kennard, Yemeni artist, Saba Jallas and feminist activists known as the Guerrilla Girls, alongside satirical artist and illustrator, Darren Cullen.

Not only do these artists provide hard-hitting impressions of our current political landscape and warfare, artists such as the 28 year-old Ahmed Jahaf continue to produce art within conflict zones. Highly influenced by the Yemen conflict, Ahmed Jahaf lives under bombardment and blockade in Yemen’s capital, Sana, where the creation of radical art could potentially endanger artists.

Speaking of his art works, he says: “Art has become a talent for me because of the war, the fear, and the suffering. In my artworks there [are] only two words: “WAR & PEACE,” and I’m just trying to show the ugliness of war, this is what happens by war while the world is watching in silence. This is my way to protest against the injustice of this forgotten war and for peace.”

Similarly, Peter Kennard has been creating photo montages with politically radical standpoints and perspectives to vehemently protest against the arms trade for over 50 years. He has encouraged individuals to open their eyes to the arms trade, after the Campaign for Nuclear Disarmament (CND) has worked for more than half a century to avoid a nuclear catastrophe. He stated, “This art is uncompromising, brutal & hard-hitting – but also very beautiful. It’s beautiful because it wants to keep us alive. All of us. (Even the lazy ones). It’s a jolt of electricity. A shot in the arm.  A kick up the backside. You know what? It’s a wake-up call.”

Origins of “Art the Arms Fair”

“Art the Arms Fair” was established in 2017 and won the Observer and Nesta New Radicals Award. Following the success of 2017’s “Art the Arms Fair”, this year’s exhibition will include sponsors such as Lush and the Network for Social Change. All profits accrued from the exhibition will be donated towards the Campaign Against the Arms Trade (CAAT). In addition to the exhibition, numerous creative events have been scheduled presenting different forms of art from both the fine arts and performing arts.

One of organisers of Arts the Arms Fair, Rhianna Louise, summarised: “The work on display will explore the causes and impacts of war, as well as envisioning a different world. The 2017 event was a major success, and this one will be even bigger and better. The DSEI arms fair brings war and conflict to London. We will challenge it with something powerful, provocative and beautiful.”

For further information, please contact Rhianna at rhianna@artthearmsfair.com or Andrew on 07990 673232.

How Can You Make the Most Out of Your Art Move?

Sotheby's Celebrates The Art of Collecting in "Inspired by Chatsworth" Exhibition