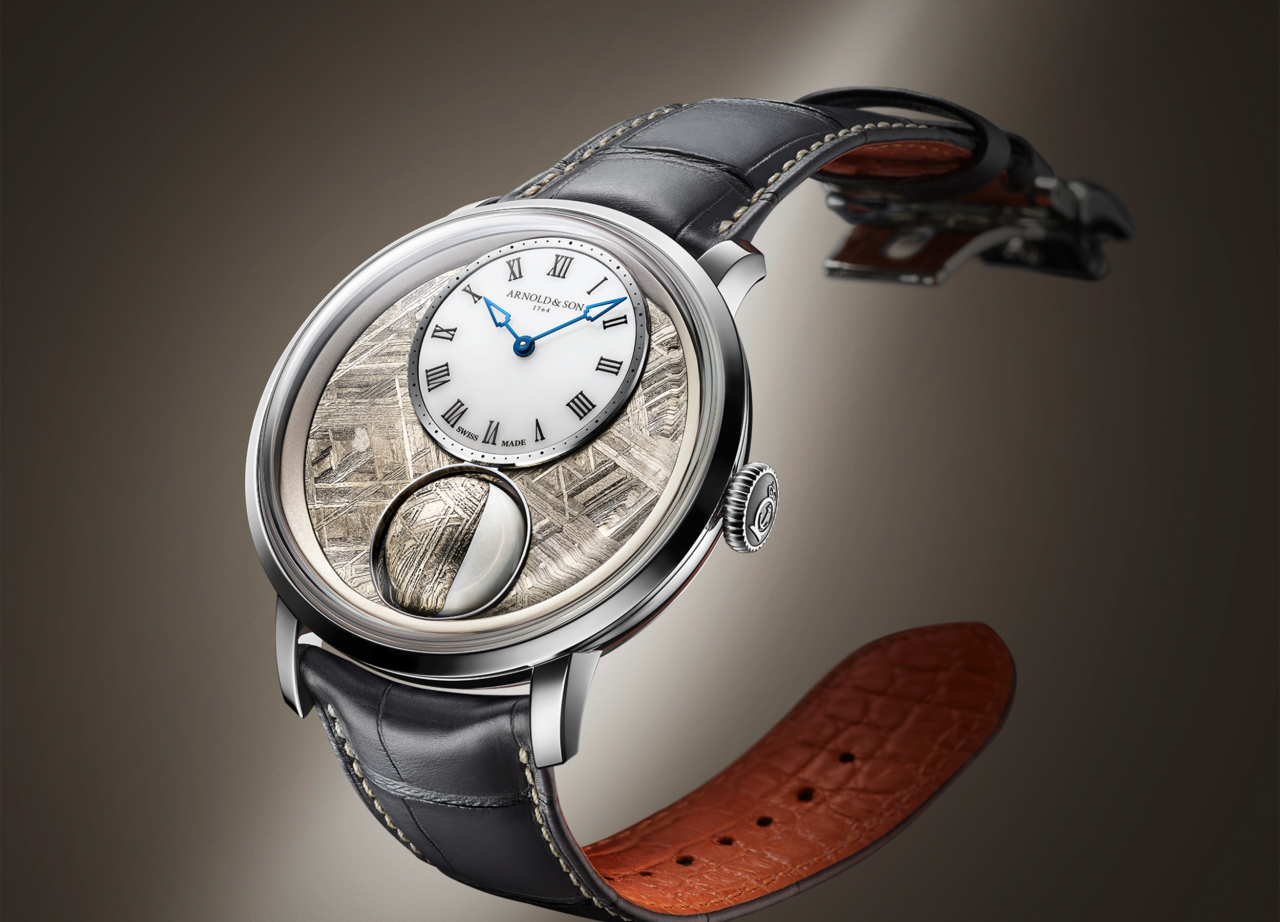 Arnold & Son have revealed their new Luna Magna Platinum model which combines materials and complications, released in a limited edition of 28 pieces.

This high watchmaking timepiece with a spherical astronomical moon is adorned with a sand-colored, PVD-treated meteorite dial surrounded by a platinum case (Pt 950). To complete this limited edition’s cosmic references, the part of the moon in shadow is also made from meteorite. In a final harmonious touch, Luna Magna Platinum shines with a distinctive glow at night thanks to the Super-LumiNova coating on its moon hemisphere and opal subdial.

The spectacular timepiece, the largest and most spectacular moon in the watchmaking cosmos, has garnered a nomination this year from the 2022 Grand Prix d’Horlogerie de Genève, nominated in the Calendar and Astronomy Category.

The ever-changing moon is an inexhaustible source of inspiration for Arnold & Son, and so begins a new cycle with Luna Magna Platinum. With a satin circular-grained finish, the hour and minute subdial is crafted from white opal, a semiprecious gemstone known for its purity and delicacy and befitting of Luna Magna’s complication. The off-centered position of this display frees up the dial, which is adorned with a large sand-colored meteorite disc. At 6 o’clock, the three-dimensional moon is carved from the same meteorite and Cacholong opal whose properties lend it to sculpting. Lastly, the understated shine of the platinum case establishes the distinguished elegance of this limited edition.

Arnold & Son chose a meteorite from the octahedrite class that, once worked, reveals “Widmanstätten patterns”, which are instantly recognisable for their jagged criss-crossing structures. The PVD treatment in a grey-beige shade reminiscent of stardust brings out the striking geometric motifs, creating a sense of harmony with Luna Magna’s astronomical complication.

The various materials catch the light and give this timepiece multiple different faces. The cool shine of the platinum is tempered by the iridescence of the meteorite and the milky whiteness of the various opals. Arnold & Son selected these stones both for their moon-like porcelain hue and their properties which make it possible to add Super-LumiNova – invisible by day but glowing blue-green at night.

Luna Magna Platinum is driven by the A&S1021 calibre, which has been fully developed, manufactured, assembled and adjusted in the Arnold & Son Manufacture. This hand-wound calibre, which has been designed with the lunar globe in mind, features a 90-hour power reserve and a regulating organ oscillating at a frequency of 3 Hz. The movement includes a secondary display detailing the age of the moon on the case-back side. Its clearly readable markings are designed for high-precision adjustments.

The sophisticated mechanics are also based on precise astronomical reality. The duration of a complete lunar cycle is 29 days, 12 hours, 44 minutes and 2.8 seconds. The Manufacture has managed to replicate it in such a way that it will take 122 years for the movement’s display to deviate from the correct celestial reading by one day. The correction required at this time will be easy to make, as the Luna Magna Platinum’s moon-phase function can be accessed directly via the crown. This practical feature has been made possible by Arnold & Son’s total mastery of the watchmaking process.

For more information about the timepiece, visit www.arnoldandson.com

The Dalmore and V&A Dundee Partner in World-First Collaboration