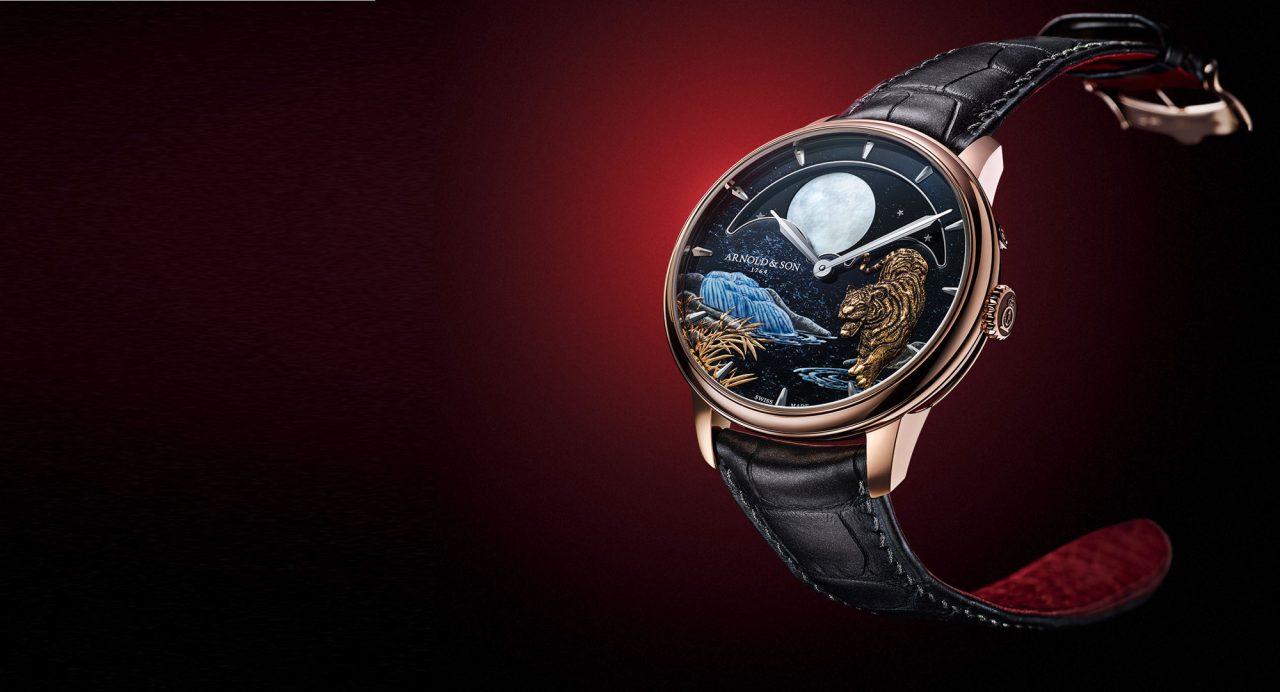 To celebrate the start of the new year in the traditional Chinese astrological calendar, Arnold & Son has embodied the year of the Water Tiger in an expressive new 8-piece limited-edition version of the Perpetual Moon timepiece, featuring a golden tiger on the prowl. In the background, a waterfall symbolizes the element that tempers this feline’s ferocious energy. The highly refined and symbolic scene is the result of consummate craftsmanship and the wide range of precious gemstones and materials employed, including hematite mother-of-pearl, aventurine, and rose gold.

The Year of the Tiger starts on Tuesday, February 1, 2022, and is considered particularly auspicious. The tiger’s courage and power are tempered by the element of water, symbolizing a year of dynamic energy and surprises. The animal featured on the dial of the “Year of the Tiger” Perpetual Moon, therefore, appears on this precious watch dial depicted poised and expectant on a riverbank, ready to enter into a promising new world.

On the canvas of the watch dial, Arnold & Son has allotted ample space for a large moon phase display. A turning disc reveals the waxing and waning of the celestial body, the appearance of the crescent moon, and its light. The moon in low relief has been crafted of mother-of-pearl enhanced and painted with Super-LumiNova. In daylight, it appears grey, almost white. In the dark, the moon appears lit from within and takes on a new aspect, brimming with gleaming detail. This ethereal effect is echoed by the dial’s aquatic details, which have also been hand-painted with luminous pigments. In the background, the disc bearing the star is made from a deep black aventurine glass.

The centerpiece of this dial is, of course, the tiger itself. Sculpted in three dimensions, it is crafted from 18-karat rose gold. Its expression, its pose, and the details of its fur have been painstakingly hand-engraved and -burnished.  This meticulous, high-caliber work testifies to Arnold & Son’s exceptional attention to detail in their limited editions that pay tribute to the Chinese zodiac.

The same attention to detail extends to the dial in every aspect. The bamboo has been painted in gold powder atop a hematite disc, exhibiting infinite glittering inclusions. To round off this dazzling scene, the “Year of the Tiger” Perpetual Moon is mounted on a glistening black alligator strap backed with red alligator leather and stitched with platinum thread.

Like all the movements used by Arnold & Son, the A&S1512 caliber was entirely developed, produced, decorated, adjusted, assembled, and finished between the walls of the brand’s manufacture in La Chaux-de-Fonds. This caliber is based on two barrels with an oscillation frequency of 3 Hz, delivering a 90-hour power reserve.

Last but not least, the moon-phase display of this movement will remain accurate for 122 years before deviating from the actual lunar cycle by a single day. In this way, the “Year of the Tiger” Perpetual Moon observes this auspicious year and takes part in the broader astronomical, astrological cycle.

SEE ALSO: A Coffee Maker With a Royal Lineage

Six Ways to Enhance Your Fine Wine Collection in 2022