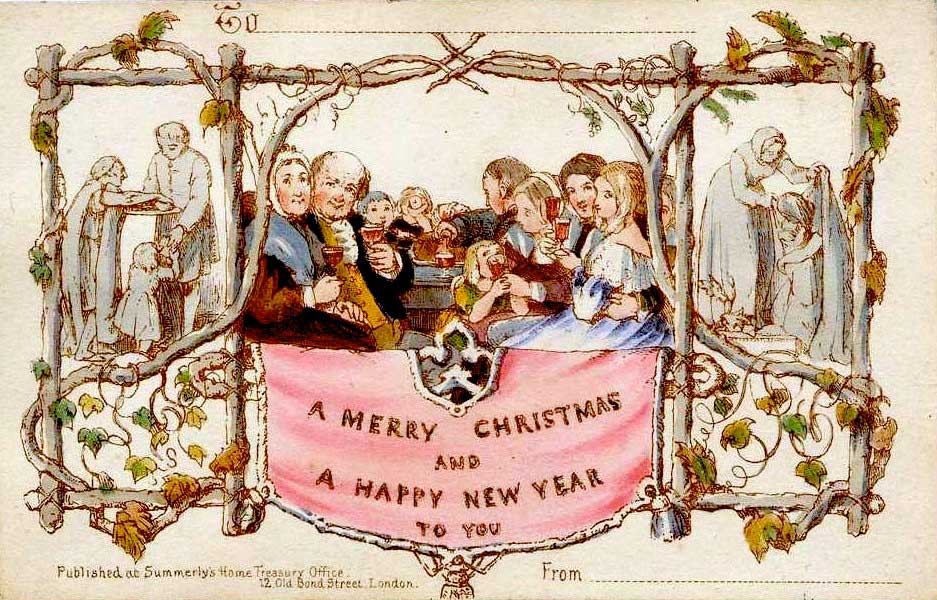 A Christmas card sent in 1843—one of the world’s first Christmas cards ever made—sold for a high £4,200 in 2013 at auctioneers Henry Aldridge & Son. Image courtesy Wikimedia Commons.

Unlike many alternative assets including fine wine and art, antique sales—in particular, Victorian antiques—have a precarious history at auction.

The Victorian age, which constitutes the period in which Queen Victoria reigned England from 1837-1901, was a particularly special time in Britain’s rich history. Much of the social, political and economic policies that exist today can be attributed to the Victorians, who implemented major reforms to better improve education, industry, countrywide infrastructure and technology under the Queen’s reign.

This shift in society resulted in more financial opportunities for the working classes, meaning that household income could be spent on lavish furniture and accessories. Because of better medicine and sanitation during this time, the mortality rate was also at an all-time high and the population grew exponentially, almost doubling in numbers.

An increase in demand

To facilitate this growth, demand for fine furniture and accessories increased and prompted mass manufacturing of high quality, stylish goods. It’s unsurprising, then, that there is an eclectic range of Victorian antiques available on the market today at relatively affordable prices. Unless a Victorian antique (defined as an object more than 100 years old) piece comes from a particularly revered craftsman, they can be bought for as little as £200, sometimes less. With this said, however, from the 20th century to present day, the popularity of such items has deeply fluctuated as styles and tastes have evolved with time, making investment in this area particularly tricky to navigate.

There is no one particular style or characterisation that can be applied to Victorian-era items that may be as obvious in, say, the Baroque period of the late 1600s to the early 1700s. Instead, furniture, jewellery and personal accessories were a varied mix of styles resurrected from classic periods before it. One of the most prominent style movements in terms of architecture, furniture, clothing and accessories of the 19th century was the Gothic Revival, or ‘Victorian Gothic’.

In high favour from the 1740s, the Gothic style remained popular deep into Queen Victoria’s reign, thanks in no small part to the rebuild of the Houses of Parliament (Palace of Westminster)—a key example of British architecture that stands proud in the heart of Westminster today.

The Houses of Parliament were redesigned by architect Charles Barry following a great fire that almost entirely obliterated the building in 1834. It was decided that the houses should exhibit the Gothic style of the 15th and 16th centuries because it better reflected English conservative values, prompting the movement’s reinvigoration in the mid-1800s right through to the turn of the century.

Other styles that encapsulate this fascinating time included the romantic nuances of the Neoclassicism movement (which refers to designs based on Classical Greece and Rome) and the lavish, decorative Rococo (or ‘Late Baroque’) movement, whose features exhibit heavily in furniture, silver and ceramics throughout the 19th century.

So, why was there a significant drop in interest in these Victorian antiques and, perhaps more importantly, is the antique market beginning to see a resurgence, gaining popularity once more? According to the Knight Frank Luxury Index 2017, investment in antique furniture alone dropped by a staggering -32 percent over the past decade, which is interesting considering other alternative assets such as cars and wine rose exponentially over the same period at 362 percent and 231 percent respectively. But with a drop at just -3 percent over the 12-month period spanning 2016/17 (significantly lower than year-on-year figures for the decade prior), could it be that interest in this unique market is beginning to recover, piquing the interest of new, younger collectors?

A slump in sales

Like with many collectable items, the sales market is dependent on various external factors including trends and popularity at any one time. Victorian antiques, and in particular, ‘brown furniture’ (Victorian furniture pieces tended to be built using walnut, mahogany and oak), has been subject to oscillation at auction, simply because their aesthetic appeal falls in and out of favour with consumers all the time.

In the 50s and 80s, ‘period rooms’ were popular features in many homes, and so, in response, Victorian antiques were very popular among ordinary households. In the last two to three decades, however, auction houses noticed a slump in sales of Victorian antiques and experts surmise that this may be because of factors like current housing and living spaces. Victorian furniture was vastly popular with those who had large home spaces to exhibit them, but as smaller homes were built and interiors trends changed to more sleek, minimalist styles, brown furniture became less desirable.

But, in very recent years, sales at auction have increased and popularity in this area seems to—tentatively—be growing. An innate human desire to reconnect with our heritage has long been a key driver in auction sales of Victorian antiques; they have a somewhat nostalgic quality to them that affectionately displays how our ancestors once lived.

Victorian jewellery, says festivalofantiques.co.uk, is projected to make a booming resurgence in the antique market alone. Besides this, furniture manufactured during this time period was largely hand-made with high quality, resilient materials. This aspect may lend itself, in part, as a reason as to why buyers prefer such antiques over the mass-produced furniture that followed in the decades after Queen Victoria’s reign. While we are not yet seeing Victorian antiquities going under the hammer for great or unprecedented sums at auction, it is safe to say that this market is slowly gaining traction.

Interestingly, experts suggest that buyers explore the niche category of Victorian Christmas cards when looking to invest in Victorian antiques for valuable return. These perennial festive mainstays were actually first invented during this time by Sir Henry Cole, starting a long-lasting tradition. A Christmas card sent in 1843—one of the world’s first Christmas cards ever made—sold for a high £4,200 in 2013 at auctioneers Henry Aldridge & Son. This particular card was a rare (just one of 15 cards still in existence from the batch of 2,000 cards originally printed that same year) black and white depiction of a joyous Victorian family sat together at a table in celebration of the season.

Elsewhere, Victorian furniture crafted by respected names of the era is highly sought after at auction. For example, a mid-Victorian walnut and parcel-guilt specimen marble centre table (c.1860) sold for £4,000 at a Christie’s auction, Interiors including Faringdon House, Oxfordshire, in April 2018. Back in 2015, a late-Victorian glazed stoneware ornament, A Monk Jar and Cover (1896), produced by prominent sculptor company Martin Brothers, fetched £60,000 at a Christie’s sale.