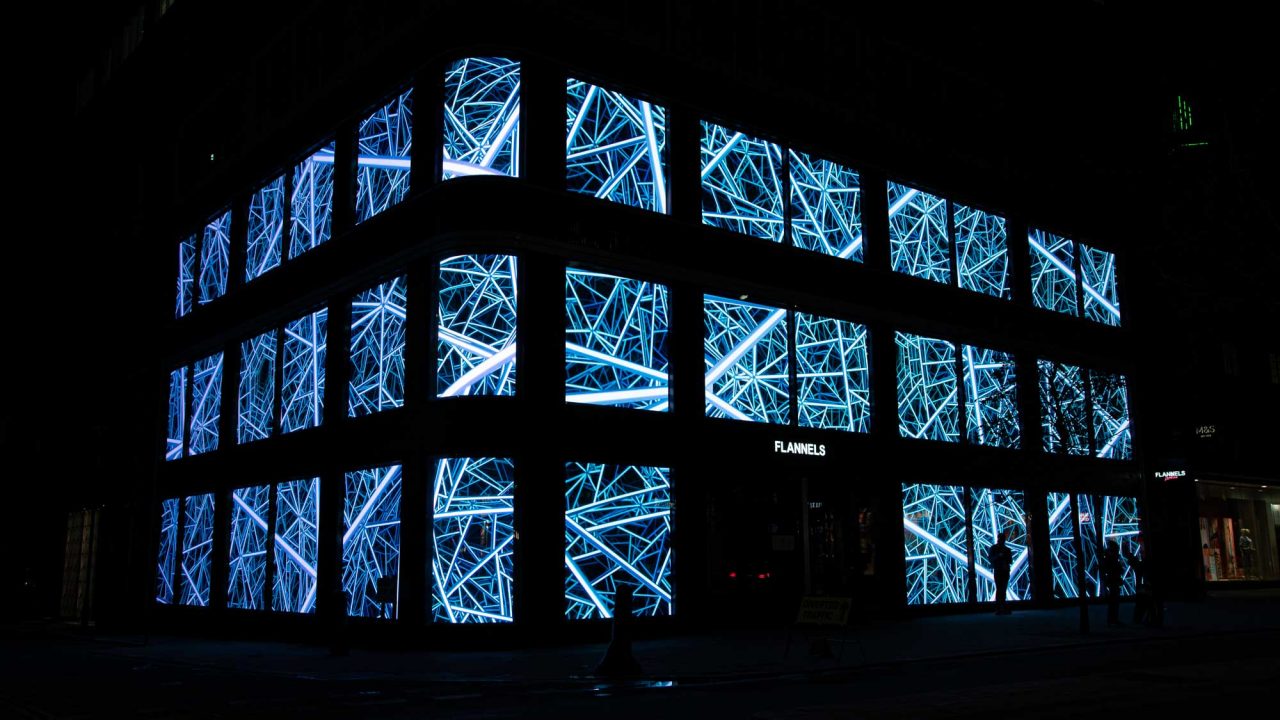 On Monday 12th April 2021, to celebrate non-essential retail opening in the UK, London’s iconic Oxford Street will be transformed into a futuristic work of art by world-renowned light sculptor Anthony James. James’ brand-new mesmerising LED artwork Constellations will be installed across 36 digital canvases over three stories, using 33 million LED lightbulbs that will wrap around the exterior of Flannels Flagship store on Oxford Street in a powerful light display.

Constellations will be the first digital public installation of its kind, giving something special back to the public at a time when public art galleries are still closed. This innovative art installation uses state-of-the-art technology including an 8K resolution system to create London’s most optically powerful screen. Presented by Opera Gallery and curated by W1 Curates, Constellations will be part of the longest running permanent art installation in Europe, offering the public new ways of accessing art at a time when the world is in flux. 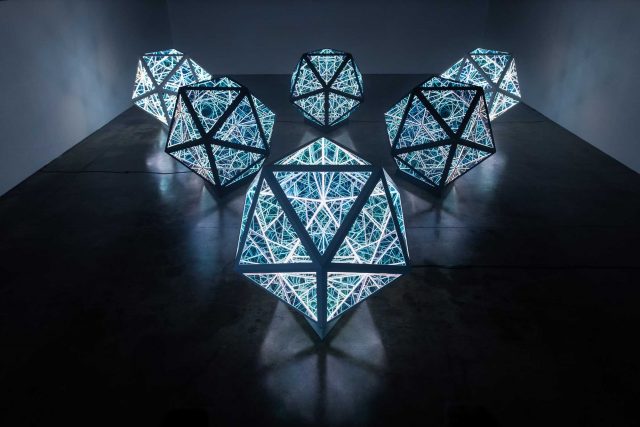 In an outdoor experience like no other, Anthony James invites the public into his artist’s world of multifaceted mirrors, glass and hallucinogenic surfaces. This spectacular new project forms part of a global public art initiative to showcase the best art for everyone to enjoy in a safe and accessible environment.

Anthony James comments: “Constellations comprises multiple works made during the last year and a half that have not been able to be displayed publicly. For this digital installation, we tried our best to create the feeling of being there in person – of experiencing the artwork as if you were in front of it. When you stand before a single sculpture, you can get deeply lost inside the vast visual demonstration of infinity which alludes to divinity and the cosmos. For viewers to walk among the artworks and to see them displayed around, against, beside – in conversation with one another – it reminds me of bright stars creating constellations. It nods to this truly prehistoric human desire to create meaning in what we witness – patterns in the stars, patterns of light, representative of something more – something bigger.” 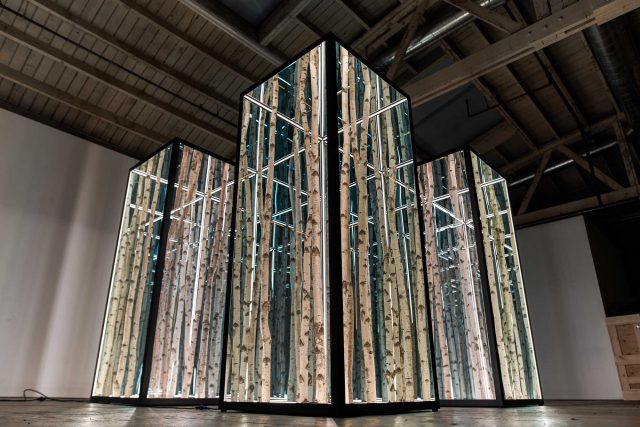 As one of the world’s most sought-after contemporary artists, Anthony James is no stranger to London’s art scene. His instantly-recognisable LED sculptures were the biggest crowd-pullers at both Masterpiece London in 2019 and Mayfair Sculpture Trail in 2020 but have never been displayed or viewed like this before. Through this digital exhibition Anthony James further investigates the concept of the universal and transcendental to create a meditative and limitless narrative. Alongside this innovative digital art installation, a selection of physical sculptures by Anthony James will be on display at Opera Gallery when the commercial gallery re-opens on 12th April.

Anthony James’ mesmerising and energetic sculptures force you to look deep inside carefully crafted glass cases and explore the cosmos of harmony and symmetry that his artwork encapsulates. To the viewer looking into the works, the straight lines often become curved before disappearing into black holes. The glass, steel, and LED structures bring a rigid and gleaming tangibility to the abstraction of the numerical calculation of flawless coherence.

Opera Gallery’s London director Federica Beretta said: “Opera Gallery are thrilled to be re-opening our London gallery space on 12th April and what better way to celebrate this milestone through this exciting new collaboration with our artist Anthony James and W1 Curates who share our passion for making art as accessible as possible.”

One of the UK’s most in-demand contemporary artists, Anthony James is known for shocking the world when he set fire to his Ferrari in a birch forest before entombing the burnt distressed remains in Kalos Thanatos (2008). His obsession with speed and mechanisation continues – the latest being his car series, Repose. The series consists of three iconic Ferrari bodies: the 1957 250 TR, 1962 250 GTO, and the 1967 P4 stripped of their engines, stripped of their function. These Ferraris are memorialised in performative stillness – icons of transition and transformation presented at eternal rest.

Anthony James (b. 1974) is a British-born, LA based multi-media artist. He studied at Central St. Martins School of Art in London. He has exhibited at Patrick Painter, Los Angeles, Gavlak, Kantor/Feuer, Marc Selwyn, Los Angeles, Blum and Poe, Los Angeles, The New Museum, New York, Spencer Brownstone Gallery, New York and Thread Waxing Space, New York. Anthony James’ first monograph, Morphic Fields, was published by Hatje Cantz in 2014. His works have been exhibited internationally, including at Art Basel (2010) in Basel and Miami Beach. They are also part of private and public collections, such as the General Motors Building, New York, and the Istanbul Museum of Modern Art.