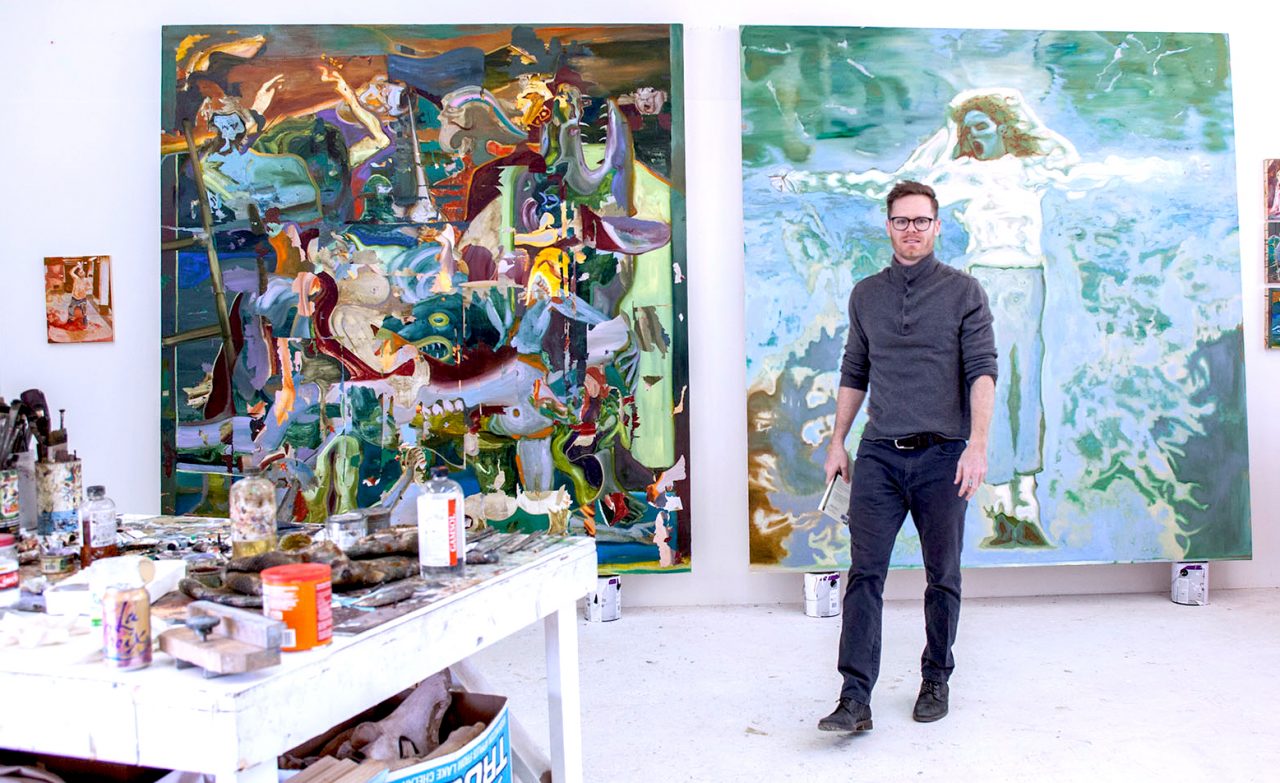 This July, Unit London presents Chimera, an exhibition of new, large-scale oil paintings by American contemporary artist Joshua Hagler. In his latest body of work Hagler addresses a range of contemporary societal issues, drawing in part from his experience growing up in Middle America throughout the Eighties and Nineties.

This informed his preoccupation with topics such as evangelical religion, conflict and fading dichotomies such as right wing/left wing, hero/villain and good/evil.

In his paintings Hagler introduces the concept of ‘violence of the mind’, which he defines as any act of imposing a narrative on an individual to create an enemy or scapegoat. He regards this culture of mob morality as a violent act, whether that person is guilty or not. In works here, such as his portrait of Michael Jackson, he encourages us to consider the popular hunger for hero and villain archetypes and its inherent hypocrisy.

The title of the exhibition, Chimera, originates from Greek mythology and describes a beast with the head of a lion, body of a goat and the tail of a serpent. It has come to mean something that is hoped for, but is impossible to achieve. With their hints of figuration, the semi-abstract compositions in Chimera are also hybrid creations that convey a sense of the unobtainable. They appear as an excavation of time: layers of figures and historic scenes, distorted by marks, smears, cuts and puddles that allude to fading or distorted memories.

Hagler’s art historical references include painting techniques found in obscure Italian religious art as well as the sociological and psychologically charged paintings of German Expressionism and New Objectivity. In The Call and the Called Out (The Dogs Grow Larger), Hagler directly references Max Beckmann whose work rose from the rise of extremism and political upheaval of the early Twentieth Century and which Hagler recalls here and connects with the era of #MeToo, Trumpism and uber-capitalism.

Joshua Hagler works in a variety of media including painting, sculpture, installation, photography and digital animation. He was born in Mountain Town, Idaho in 1979 and spent his formative years living between rural Illinois and Arizona. Hagler graduated with a Bachelor of Fine Arts at the University of Arizona in Tucson in 2002 and currently works and resides alongside his partner Maja Ruznic, a fellow contemporary painter, in Los Angeles, California. Since 2006, Hagler has exhibited at both group and solo shows in galleries and museums across North and South America, Europe and Australia.

Founded in 2013, Unit London was born from an innate desire to break down the barriers of elitism and create new innovative pathways into the contemporary art world, recognised for its pioneering approach to digital media and role in expanding and diversifying audiences using new technologies. Since its inception, Unit London has strived to provide a unique and experimental platform for the world’s most distinctive emerging talent, showcasing their work to a culturally curious audience across the globe.

How Is the Luxury Furniture Market Developing Worldwide?